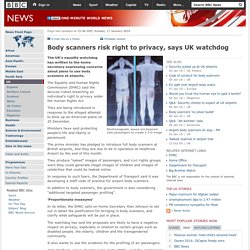 The Equality and Human Rights Commission (EHRC) said the devices risked breaching an individual's right to privacy under the Human Rights Act. They are being introduced in response to the alleged attempt to blow up an American plane on 25 December. Ministers have said protecting people's life and liberty is paramount. The prime minister has pledged to introduce full body scanners at British airports, and they are due to be in operation at Heathrow Airport by the end of this month. They produce "naked" images of passengers, and civil rights groups warn they could generate illegal images of children and images of celebrities that could be leaked online.

Full-body scanners: all the ingredients for a Tory farce. When Alan Bennett wrote in The History Boys that "the loss of liberty is the price we pay for freedom", could he have imagined that his neat and flippant paradox would end up piercing to the heart of a dilemma facing today's Conservative party? 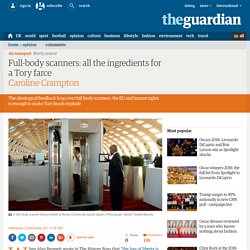 The problem for the Tories is this: human rights organisations have raised concerns that compulsory use of the new full-body scanners at some airports infringe an individual's right to privacy, while these very same scanners are only there at all because they are provide better protection for passengers against potential terrorism. To be blunt, allowing the airport security to see grey, blotchy representations of your semi-naked body is the price you're paying, and in return you are granted the freedom to travel the skies unmolested by concealed weapons and explosives. If you're a Conservative, this is enough of an ideological feedback loop to make your head explode. If you're still not sure whose fault all this is, blame the terrorists. Airport Body Scanners a Breach of Privacy? By: Garry Crystal - Updated: 15 Aug 2012| *Discuss. 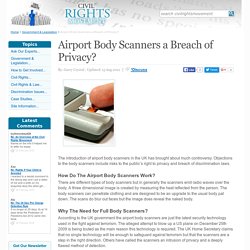 How CCTV helped snare failed terrorists. Soon after the failed July 21 bombings, grainy CCTV images of those suspected of carrying out the attacks were released by police. 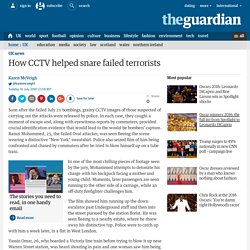 In each case, they caught a moment of escape and, along with eyewitness reports by commuters, provided crucial identification evidence that would lead to the would-be bombers' capture. Ramzi Mohammed, 25, the failed Oval attacker, was seen fleeing the scene wearing a distinctive "New York" sweatshirt. Paris terror attacks: Salah Abdeslam 'caught on CCTV strolling along with his hands in pockets'

Europe's most wanted man has been caught on CCTV cameras, according to reports. 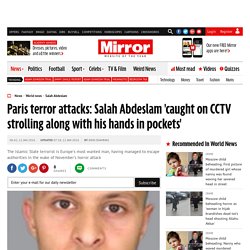 Salah Abdeslam was one of the Paris terror attack gunmen who murdered 130 people on November 13 across a number of busy venues in the French capital. Authorities believe that Abdeslam attempted to flee to Belgium following the attack. It has now emerged that he was filmed on CCTV en route to Brussels from Paris alongside his friends Mohammed Amri and Salah Hamza Attou. Reuters The CCTV footage shows the terrorist strolling along, with his hands in his pockets.

Read more: Islamic extremists jailed for "serious and deliberate" breach of counter-terrorism restrictions They were filmed while waiting at a police border, where they waited for 15 minutes as the three men went through routine checks. Both Amri and Attou were arrested in Molenbeek the next day, and are now facing terror charges. Read more: Bomb factory of Paris terror mastermind found in Brussels flat during police raid He is still on the run. Watch Next. One surveillance camera for every 11 people in Britain, says CCTV survey. He added: “Effective CCTV schemes are an invaluable source of crime detection and evidence for the police. 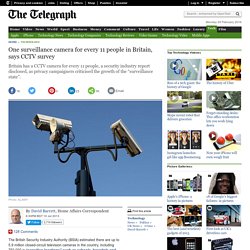 For example, in 2009 95 per cent of Scotland Yard murder cases used CCTV footage as evidence.” But Nick Pickles, director of the privacy campaign Big Brother Watch, said: “This report is another stark reminder of how out of control our surveillance culture has become. “With potentially more than five million CCTV cameras across country, including more than 300,000 cameras in schools, we are being monitored in a way that few people would recognise as a part of a healthy democratic society.

“This report should be a wake up call that in modern Britain there are people in positions of responsibility who seem to think ‘1984’ was an instruction manual.” The survey included all cameras in public and private areas, regardless of whether the images are recorded or watched “live”. UK public must wake up to risks of CCTV, says surveillance commissioner. The increasing use of surveillance technology – including body-worn video, drones and number plate recognition systems – risks changing the “psyche of the community” by reducing individuals to trackable numbers in a database, the government’s CCTV watchdog has warned. 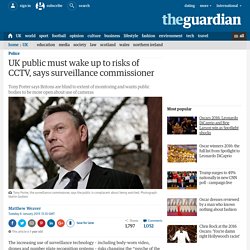 In his full first interview as surveillance commissioner, Tony Porter – a former senior counter-terrorism officer – said the public was complacent about encroaching surveillance and urged public bodies, including the police, to be more transparent about how they are increasingly using smart cameras to monitor people. Porter stressed that he was not anti-surveillance and insisted he was helping to improve standards by encouraging the adoption of a voluntary code.