NATURAL REMEDIES ALTERNATIVE LIVING. The Sixth Sense You Didn't Know You Had - The Crux. Ever fancied having a superpower? 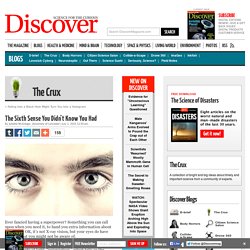 Something you can call upon when you need it, to hand you extra information about the world? OK, it’s not X-ray vision, but your eyes do have abilities that you might not be aware of. We are all familiar with color and brightness, but there is a third property of light: “polarization,” which tells us the orientation in which light waves are oscillating. Animals, like bees and ants, use the polarization patterns in the sky as a navigation aid. But few people, even in the scientific community, are aware that humans can sense the polarization of light with the naked eye. In research we’ve just published in Proceedings of the Royal Society B, we used an experiment that was originally designed to test the visual abilities of octopuses and cuttlefish to investigate our human ability to perceive this polarized light. Polarized Light Imagine a jump rope is a light wave traveling through space. See For Yourself Cuttlefish see polarized light very well. 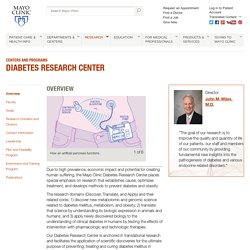 The research domains (Discover, Translate, and Apply) and their related cores: 1) discover new metabolomic and genomic science related to diabetes mellitus, metabolism, and obesity; 2) translate that science by understanding its biologic expression in animals and humans; and 3) apply newly discovered biology to the understanding of clinical diabetes in humans by testing the effects of intervention with pharmacologic and technologic therapies. Our Diabetes Research Center is anchored in translational research and facilitates the application of scientific discoveries for the ultimate purpose of preventing, treating and curing diabetes mellitus in humans. Executive Committee — enhances community and research volunteer engagement. 27 Medicinal Plants Worth Your Garden Space. Playful as kids are, accidents happen. 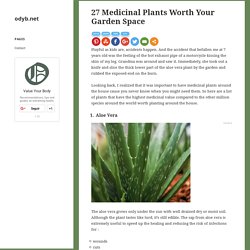 And the accident that befallen me at 7 years old was the feeling of the hot exhaust pipe of a motorcycle kissing the skin of my leg. Grandma was around and saw it. Immediately, she took out a knife and slice the thick lower part of the aloe vera plant by the garden and rubbed the exposed end on the burn. Looking back, I realized that it was important to have medicinal plants around the house cause you never know when you might need them.

So here are a list of plants that have the highest medicinal value compared to the other million species around the world worth planting around the house. Aloe Vera The aloe vera grows only under the sun with well drained dry or moist soil. Woundscutsburnseczemareducing inflammation Apart from its external use on the skin, aloe vera is also taken internally in the treatment of : Vitamin D is a Powerful Anti-Inflammatory. Monday, April 23, 2012 By: Byron J. 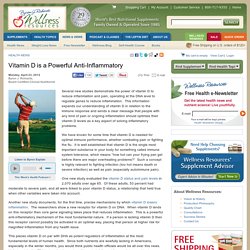 Richards, Board Certified Clinical Nutritionist Several new studies demonstrate the power of vitamin D to reduce inflammation and pain, operating at the DNA level to regulate genes to reduce inflammation. This information expands our understanding of vitamin D in relation to the immune response and sends a clear message that people with any kind of pain or ongoing inflammation should optimize their vitamin D levels as a key aspect of solving inflammatory problems. We have known for some time that vitamin D is needed for optimal immune performance, whether combating pain or fighting the flu.

Photos of the World. Fabulous photographs. New Gel That Stops Bleeding in Wounds Invented. A magic gel developed by scientists can stop heavy bleeding in wounds. 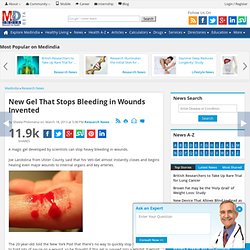 Joe Landolina from Ulster County said that his Veti-Gel almost instantly closes and begins healing even major wounds to internal organs and key arteries. The 20-year-old told the New York Post that there's no way to quickly stop bleeding except to hold lots of gauze on a wound, so he thought if this gel is poured into a wound, it would solidify and stop the bleeding. Landolina, who is simultaneously pursuing a bachelor's degree in biomolecular and chemical engineering and a master's in biomedical engineering, created the substance with another university grad, Isaac Miller. The lifesaving goo is an artificial version of something called the extracellular matrix, which makes up the connective tissue that helps hold animal bodies together. Landolina said that they used plant-derived versions of the polymers that make up our skin to make the gel. 18 Amazing Facts About the Human Body - Infographic.