Numbers Stations: A Comprehensive, Exhaustive List Of Resources. Numbers stations started in the cold-war era, possibly WW1 and continuing into this modern day. 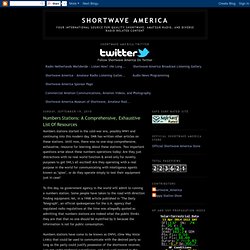 SWA has written other articles on these stations. Until now, there was no one-stop comprehensive, exhaustive, resource for learning about these stations. Two important questions arise about these numbers operations today: Are they just distractions with no real world function & aired only for novelty purposes to get SWL's all excited? Are they operating with a real purpose in the world for communicating with intelligence agents known as "spies", or do they operate simply to test their equipment just in case?

To this day, no government agency in the world will admit to running a numbers station. Numbers stations have come to be known as OWVL (One Way Voice Links) that could be used to communicate with the desired party so long as the party could justify possession of the shortwave receiver, was not under technical surveillance, and was well trained in the tradecraft. NPR Article one 1. Surfing the Radio Waves. 53°44'N  0°26'W. Numbers Stations : Shortwave Radio: Numbers stations. Rodent Revolution WBNY Radio Bunny. Front Page | Stations | Numbers Racket | Database | Resources | About | Press This station has been noted several times. 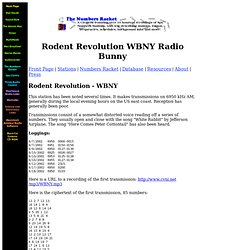 It makes transmissions on 6950 kHz AM, generally during the local evening hours on the US east coast. Reception has generally been poor. Transmissions consist of a somewhat distorted voice reading off a series of numbers. They usually open and close with the song "White Rabbit" by Jefferson Airplane. Mikes radio files. Mike and Sniffy's radio 'X' files Click on the graphics to hear the sounds or jump to another page From this page you will find: (XSW) S32 study page, Spy Numbers page, XP Polytone page, many sound files and don't use 0870 page. 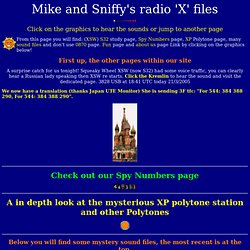 Fun page and about us page Link by clicking on the graphics below! Russian Woodpecker. Coordinates: Duga-3 array within the Chernobyl Exclusion Zone. 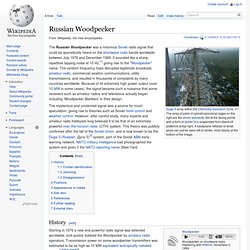 The array of pairs of cylindrical/conical cages on the right are the driven elements, fed at the facing points with a form of ladder line suspended from stand-off platforms at top right. A backplane reflector of small wires can just be seen left of center, most clearly at the bottom of the image. The Russian Woodpecker was a notorious Soviet radio signal that could be sporadically heard on the shortwave radio bands worldwide between July 1976 and December 1989. It sounded like a sharp, repetitive tapping noise at 10 Hz,[1] giving rise to the "Woodpecker" name. The mysterious and unclaimed signal was a source for much speculation, giving rise to theories such as Soviet mind control and weather control. History[edit] Russian Woodpecker in Kiev Oblast Starting in 1976 a new and powerful radio signal was detected worldwide, and quickly dubbed the Woodpecker by amateur radio operators.

Civilian identification[edit] Yosemite Sam (shortwave) Yosemite Sam is the nickname given by DXers to a number station that first surfaced on December 19, 2004. 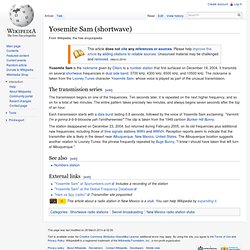 It transmits on several shortwave frequencies in dual side band: 3700 kHz, 4300 kHz, 6500 kHz, and 10500 kHz. The nickname is taken from the Looney Tunes character Yosemite Sam, whose voice is played as part of the unusual transmission. The transmission begins on one of the frequencies. Ten seconds later, it is repeated on the next higher frequency, and so on for a total of two minutes. The entire pattern takes precisely two minutes, and always begins seven seconds after the top of an hour. Each transmission starts with a data burst lasting 0.8 seconds, followed by the voice of Yosemite Sam exclaiming: "Varmint, I'm a-gonna b-b-b-bloooow yah t'smithereenies! " Mystery Signals of the Short Wave. UVB-76 Live Stream Blog. UZB-76/UVB-76 record from 1997.

The 5 Creepiest Unexplained Broadcasts. As we speak, broadcast signals are moving invisibly through the air all around you, from millions of sources. And some of them are really, really freaking weird. We know this because occasionally somebody with a shortwave radio, or a special antenna or even a common household television, will capture one of these mystery signals and suddenly start broadcasting utter insanity. Where do these signals come from? Who the hell knows? What is it? It is an irritating, electronic noise, not unlike the sound of a truck horn played through a cheese grater. Hammertime? In its 20-something year run, the sound has been interrupted only three times, the earliest known time being Christmas Eve in 1997.

The case gets curiouser when you realize that the noise is apparently something held up to a live microphone rather than a recording or just some random feedback (distant conversations can be sometimes heard behind the sound, though they're difficult to decipher). It sounds like "robble-robble.