Why American Independent Internet Radio May Go Extinct in 2016 - Radio Survivor. The new performance royalty rates that internet radio will pay artists and record labels were released on December 16 and many small and mid-sized internet-only broadcasters are now fearing they’ll be put out of business. 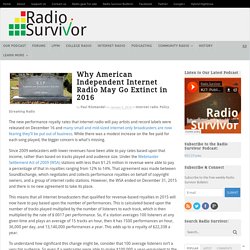 While there was a modest increase on the fee paid for each song played, the bigger concern is what’s missing. Since 2009 webcasters with lower revenues have been able to pay rates based upon that income, rather than based on tracks played and audience size. Under the Webmaster Settlement Act of 2009 (WSA) stations with less than $1.25 million in revenue were able to pay a percentage of that in royalties ranging from 12% to 14%. Webcasting Royalty Decision Developments – Revised Rates and Terms from the CRB, Issues about Performance Complement and Small Webcasters. The actions and reactions in response to the Copyright Royalty Board’s decision from two weeks ago continue to roll in as the ramifications of the decision sink in. 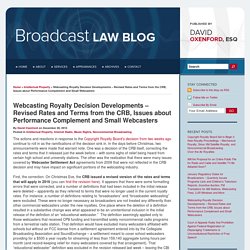 In the days before Christmas, two announcements were made that warrant note. One was a decision of the CRB itself, correcting the rates and terms that it released just the week before – with some sighs of relief being heard from certain high school and university stations. The other was the realization that there were many issues covered by Webcaster Settlement Act agreements from 2009 that were not reflected in the CRB decision and may have impact on significant portions of the webcasting industry. First, the correction. On Christmas Eve, the CRB issued a revised version of the rates and terms that will apply in 2016 (you can find the revision here). Under these waiver agreements, commercial broadcasters can ignore the performance complement if done in the context of a simulcast of a routine over-the-air broadcast. 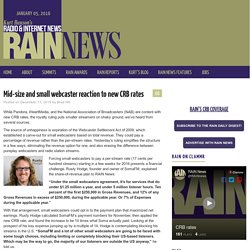 The source of unhappiness is expiration of the Webcaster Settlement Act of 2009, which established a carve-out for small webcasters based on total revenue. They could pay a percentage of revenue rather than the per-stream rates. Yesterday’s ruling simplifies the structure in a few ways, eliminating the revenue option for one, and also erasing the difference between pureplay webcasters and radio station streams. Forcing small webcasters to pay a per-stream rate (17 cents per hundred streams) starting in a few weeks for 2016 presents a financial challenge. 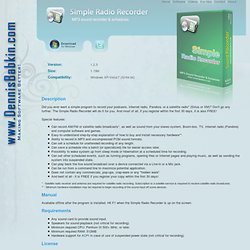 Don't go any further. The Simple Radio Recorder will do it for you. The History Of Radio. BAKOM - Das BAKOM. SLLA 2.0 › RADIOTEXT(E) PDF. Bain Capital Owns Clear Channel (Rush Limbaugh, Sean Hannity, Glenn Beck, Michael Savage, Etc.) Wouldn’t it be great if a Republican presidential candidate could just buy the support of just about every major conservative talk show host in America? 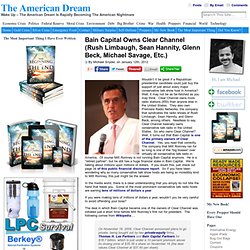 Well, it may not be as far-fetched as you may think. Clear Channel owns more radio stations (850) than anyone else in the United States. They also own Premiere Radio Networks, the company that syndicates the radio shows of Rush Limbaugh, Sean Hannity, and Glenn Beck, among others. Needless to say, Clear Channel basically owns conservative talk radio in the United States. So who owns Clear Channel? In the media world, there is a clear understanding that you simply do not bite the hand that feeds you. If you were making tens of millions of dollars a year, wouldn’t you be very careful to avoid offending your boss?

The deal in which Bain Capital became one of the owners of Clear Channel was initiated just a short time before Mitt Romney’s first run for president. The deal was finalized in 2008. Not likely. I think now we know. TuneIn: Listen to Online Radio, Music and Talk Stations. PineMedia.ca - Journal radio. Foreign Internet Radio - Listen to foreign online radio news and information and practice a foreign language! Www.mediendaten.de/fileadmin/Hoerfunk/Radio_der_Zukunft/Radio-der-Zukunft.pdf. Playlistify.org - Bake, share and discover playlists. HOW TO: Create Free Music Playlists Online. Sharing music can be as much fun as listening to it. 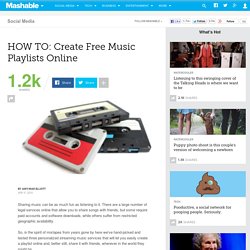 There are a large number of legal services online that allow you to share songs with friends, but some require paid accounts and software downloads, while others suffer from restricted geographic availability. So, in the spirit of mixtapes from years gone by here we've hand-picked and tested three personalized streaming music services that will let you easily create a playlist online and, better still, share it with friends, wherever in the world they might be.

Try out the services we've listed below and let us know which you like the most. Oh, and be sure to link to the playlists you create in the comments so we can have a listen. 1. Creating a Playlist Mixtape.me is really easy both to get started with and get using. Finding content for your list is likewise just as easy. While your list is auto-saved as you go along, it can just as easily be edited. Sharing Options There are a few options for you here. 2. 8tracks 3. Sharing Options. Online Radio & TV Toolbar. Software SelectPicks(tm) Links. Streaming Radio Guide - Internet Radio Station Directory - Stream Radio Stations From Around The World. 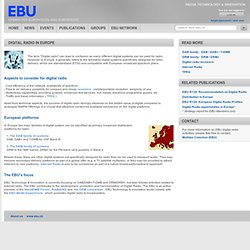 European platforms Beside these, there are other digital systems not specifically designed for radio that can be used to transport audio. The EBU's focus. TECHNICAL - Internet radio. What about Internet Radio? 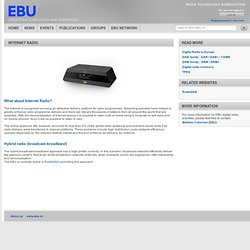 The Internet is recognized as being an attractive delivery platform for radio programmes. Streaming websites have helped to greatly enhance radio programme delivery and there are literally thousands of stations from all around the world that are available. With the democratization of Internet access it is possible to listen both at home using a computer or wifi radio and on mobile phones. Soon it will be possible to listen in cars. RadiOM.org - New music, composers, poetry, video and audio streaming. Radio Industry Trends, News, Research, Perspectives, Online Radio, Sync Radio and Digital Media. Pandora Today and Tomorrow – Pandora CEO Joe Kennedy (Part 2) University of San Francisco (USF) - Moheak.