EcoGeek - Brains for the Earth 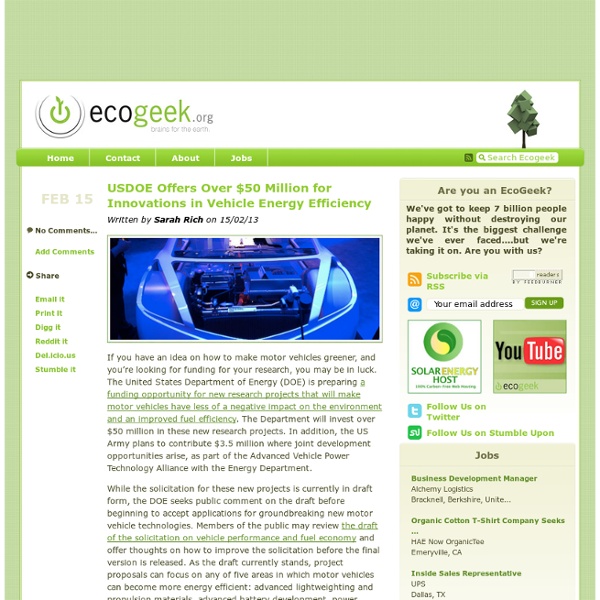 The Harvard Law School Forum on Corporate Governance and Financi Editor’s Note: The following post comes to us from Guido Rossi, former Chairman of the Consob (Italian SEC), and Marco Ventoruzzo of Pennsylvania State University, Dickinson School of Law, and Bocconi University. A recent and groundbreaking decision of the European Court of Human Rights (ECHR) in Strasburg might shatter the entire structure of the Italian and European regulation of market abuse (insider trading and market manipulations). The case is “Grand Stevens and others v. Italy”, and was decided on March 4, 2014. The facts can be briefly summarized as follows. In 2005, the corporations that controlled the car manufacturer Fiat, renegotiated a financial contract (equity swap) with Merrill Lynch. …continue reading: European Court of Human Rights Shakes Insider Trading Rules

Daily Danny - Green Living Expert Danny Seo’s eco-friendly and crafty ideas for everyday living. for Good: Going Green: What You Can Do Lexus aloof from China production while Nissan, Honda step in By Yoko Kubota BEIJING (Reuters) - The head of Lexus, the premium brand of Toyota Motor Corp , said on Sunday an emphasis on quality had kept it from manufacturing in China. Unlike German peers Audi, Volkswagen AG's luxury division and BMW , Lexus imports all of its vehicles sold in China, from… Gray&#039;s Anatomy of the Human Body Introduction Anatomical Bibliography I. Embryology Bibliography II. III. IV. V. VI. VII. VIII. IX. X. XI. XII.

The Bing Blog - Fortune on CNNMoney.com By Stanley Bing FORTUNE -- Ever since my Roomba carpet-cleaning robot ran over my foot and masticated my shoe, I have been wary of robots as substitutes for actual working persons. I particularly felt that my job in management was safe from the incursion of machines with friendly faces painted on the front of their heads, or whatever you call the metal constructions atop their shoulders, if those are indeed shoulders. Now I'm not so sure. Apparently there are two economists from MIT who believe, as the New York Times put it recently, "that the pace of automation is accelerating and that robotics is pushing into new areas of the workforce like white-collar jobs that were previously believed to be beyond the scope of computers." In other words, my position is now challenged not only by mergers, restructurings, and the incursions of management consultants who have to earn their bread and butter by eliminating mine, but also by robots. Well, you know what? What about sucking up?