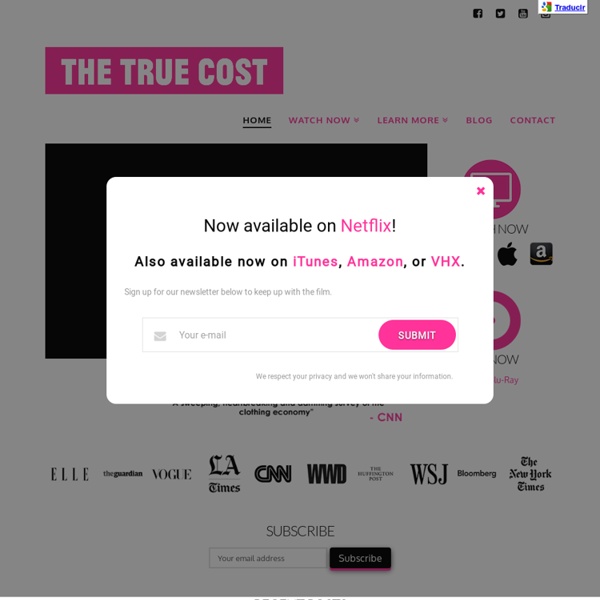 Zero Waste Skirt Tutorial We haven’t heard from zero waste extraordinaire Frankie Campbell in a little while. She’s been a busy bee working on a new, exciting collection! Hopefully we’ll see more of that in the coming months, but for now, here she is with a fabulous zero waste skirt for you to sink your teeth into. Fabrics Suitable for lightweight fabrics, cotton, georgette, silk, bamboo. Can a hashtag change the fashion industry? Now in its second year, Fashion Revolution Day (FRD) is a hashtag campaign designed to keep the most vulnerable in the fashion supply chain in the public eye. Held on the anniversary of the Rana Plaza factory collapse in Bangladesh, participants are encouraged to take a selfie showing the label on their clothes and ask the designer or brand #whomademyclothes. It’s an important cause, but can a hashtag campaign really bring meaningful change to the fashion industry?

Exciting Breakthrough In Recycled Cotton Fabric Have you heard the news? The textile industry is abuzz with a miraculous new fibre. Lenzing, a company well-known and respected for its sustainable innovations, has just launched a new product combining their groundbreaking wood-based fibre, Tencel, and cotton waste fibre. Known as the “Next Generation Tencel Fibre”, it is being heralded as the most eco-friendly fibre on the planet.

Nike and Adidas show cautious support for eco-friendly dye technology It has been a significant step forward for the textile sector. Up until now the effluent from dye houses that can often be seen in rivers flowing through the textile manufacturing areas of India, China and elsewhere is a result of unabsorbed dyes, chemicals and heavy salts that are used during the dyeing process. A number of companies, DyeCoo, ColorZen and AirDye have set out to address this pollution by designing waterless dye technology. The result is a reduction in wastewater, energy, chemicals and toxic discharge to such a degree that it could revolutionise the textile industry. Major brands including Nike and Adidas have been integrating waterless dye technologies into their product lines, but costs and limitations have experts in the textile industry worried that the support will not last.

Why Are You Wearing Dirty Oil? Image: “Clothing Spill” by Savers. Credit: Ecouterre Co-Authored by Kathrine Nasteva CEO Lozena The future of food is ugly as Walmart takes movement mainstream The future of produce is ugly. Twisted, blemished, mutated and deformed, to be specific. That's because an increasing number of grocery chains and crop-sharing services have begun stocking and distributing fruits and vegetables that were once deemed unfit for sale based solely on appearance. To be clear, these goods aren't damaged or rotten or distasteful.

Fast fashion: International chains turn to green initiatives as alternative labels pop up Posted Warwick Levy was so miserable, anxious and unhappy while studying a construction course at university that he quit to start a t-shirt label in 2010. Key Points We can save the earth without giving up bacon You'd have to be living under a rock to have missed the memo: Too much meat is bad for your health , responsible for immense animal cruelty on factory farms, to blame for speeding up climate change, at fault for squeezing out rare species and more. Yet despite increased pressure to eliminate meat from our diet, consumption rates have been slow to budge. Americans are eating less beef, but chicken sales are on the rise. China has committed to cutting its meat consumption in half, but other developing nations are expected to eat more meat and dairy in coming years. With rising incomes, population growth and the spread of Western diets, the trend toward heavily animal-based diets looks as though it's here to stay .

The Story of Stuff The Story of Stuff, originally released in December 2007, is a 20-minute, fast-paced, fact-filled look at the underside of our production and consumption patterns. The Story of Stuff exposes the connections between a huge number of environmental and social issues, and calls us together to create a more sustainable and just world. It’ll teach you something, it’ll make you laugh, and it just may change the way you look at all the Stuff in your life forever. Download the Fact Sheet Credits

Espadrilles - Alohas Sandals PRE ORDER - Back Strap Black Size Guide PLEASE NOTE THAT THIS STYLES ARE ON PRE ORDER ONLY. Recycled Footwear Fever - Developments in Shoe Materials Recycled footwear doesn’t always get the attention it deserves. This exciting and cutting-edge alternative blends eco-friendly principles with those of style and fashion. Right now, lots of designers are directing their focus towards footwear that attracts attention while also conforming to the low-impact lifestyle that so many crave by using innovative shoe materials. Recycled footwear is a great solution as it binds function and practicality with already existing materials.