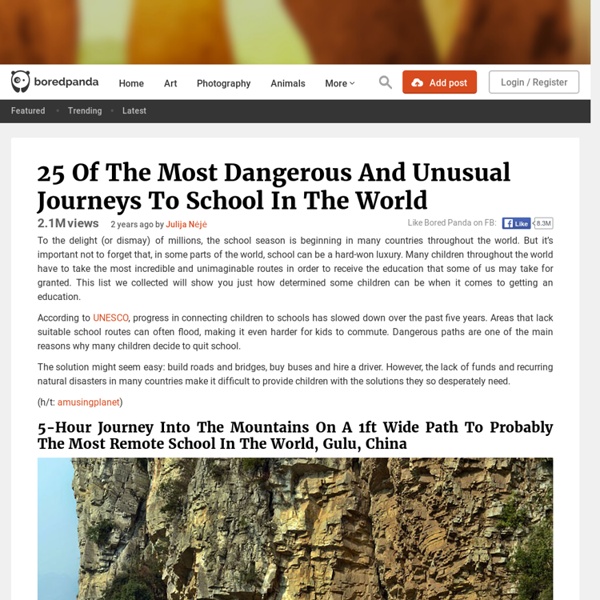 To the delight (or dismay) of millions, the school season is beginning in many countries throughout the world. But it’s important not to forget that, in some parts of the world, school can be a hard-won luxury. Many children throughout the world have to take the most incredible and unimaginable routes in order to receive the education that some of us may take for granted. This list we collected will show you just how determined some children can be when it comes to getting an education. According to UNESCO, progress in connecting children to schools has slowed down over the past five years. Areas that lack suitable school routes can often flood, making it even harder for kids to commute. The solution might seem easy: build roads and bridges, buy buses and hire a driver. (h/t: amusingplanet) 5-Hour Journey Into The Mountains On A 1ft Wide Path To Probably The Most Remote School In The World, Gulu, China Thanks for sharing! 3x per week 30,000,000+ monthly readers Error sending email

These 20 powerful photos of kids’ bedrooms will change the way you look at the world Like us on FB: Where Children Sleep is a powerful photo series by English photographer James Mollison. He traveled around the world capturing the differences between the lifestyle of kids from different countries. 40 maps that explain the world By Max Fisher By Max Fisher August 12, 2013 Maps can be a remarkably powerful tool for understanding the world and how it works, but they show only what you ask them to. So when we saw a post sweeping the Web titled "40 maps they didn't teach you in school," one of which happens to be a WorldViews original, I thought we might be able to contribute our own collection. If She’s Not Having Fun You Have To Stop This is about the nuts-and-bolts of how the work gets done. This is about parenting the next generation. A boy and a girl run around on the grass at the park. The boy tackles the girl. The girl laughs.

Where Children Sleep photographs from around the world Photographer James Mollison travelled around the world to capture children's bedrooms The project, Where Children Sleep is set to highlight children's rights across the globeChildren, and their bedrooms, come from all over the world, from China to the U.S. to Brazil By Sara Malm Published: 10:30 GMT, 3 April 2014 | Updated: 14:43 GMT, 3 April 2014 The difference between east and west, rich and poor becomes stark when looking at how our children sleep at night.

Self-Control, Grit & All That Stuff Regular readers know that I’m a big advocate of teaching Social Emotional Learning skills in the classroom (see The Best Social Emotional Learning (SEL) Resources), but that I also am wary of how it is being viewed by some as almost a cure-all (see my Washington Post piece, The manipulation of Social Emotional Learning). There have recently been some interesting articles and research about the topic that I thought readers might want to know about… The MindShift blog writes about a new study by “grit” researcher Angela Duckworth that has tried to update the famous self-control marshmallow experiment for the digital age. 12 Useful Math Hacks That They Didn’t Teach You In School 6. How To Figure Out What Day Of The Week Falls On What Date… You might be confused looking at the picture below, but the math is actually quite simple (albeit a bit elaborate). You’ll need the codes HERE, which will help you master this. July simply has a code of 5. 20th is 6 because 7 goes into 20 twice, which is 14. 20 – 14 = 6. 2069 is 2 because the leap year code of 2068 is 1 and 2069 is 1 year after, so that’s 2. The math can be difficult at first because there are a lot of codes, but it works out incredibly well once you pick it up.

Chronas May Be The Best New World History Site Of The Year Chronas is a new site that lets you used a time “slider” at the bottom to see how the world looked at pretty much any given date during the past 2000 years. If you click on the countries/regions/empires shown, then it will show you the appropriate Wikipedia entry. It’s still working out its kinks — it wouldn’t let me view it on a mobile device and, even though it says you can view it on browsers other than Chrome – I wouldn’t.

nquering Synovial Sarcoma: How is your "Hauora" today? Hauora is a Maori health philosophy which takes a far broader interpretation on someone’s health than western culture. As well as taking a wider perspective on someone’s physical, mental & emotional wellbeing it also takes into account the social components of your life (family, friends and relationships) and your spirituality wellbeing. Hauora is taught in New Zealand schools as the "new" health curriculum and has gained some international acclaim. 30 Magical Photos Of Children Playing Around The World No matter their cultural background, no matter their economic situation, kids will always find imaginative ways to have fun. Their wild imaginations and magical childhood moments, when captured on camera by talented photographers, can make for truly wonderful photos. These 33 images we collected will prove that childhood can be wonderful no matter where you go. Show Full Text Many in the Western world fear that technology is making today’s children lose touch with nature and with their own creativity, and while there are arguments to be made for the intellectual stimulation that apps and programs for children can bring, there’s also something to be said for simply playing with a stick in the mud or chasing dandelion seeds though an open meadow. For better or worse, the children in these photos seem entirely content making their own fun.