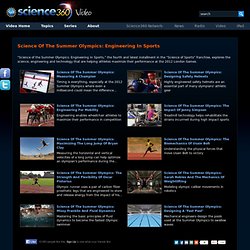 Timing is everything, especially at the 2012 Summer Olympics where even a millisecond could mean the difference... Highly engineered safety helmets are an essential part of many olympians' athletic gear Engineering enables wheelchair athletes to maximize their performance in competition Treadmill technology helps rehabilitate the strains incurrred during high impact sports Measuring the horizontal and vertical velocities of a long jump can help optimize an olympian's performance during the...

Understanding the physical forces that move Usain Bolt to victory Olympic runner uses a pair of carbon fiber prosthetic legs that are engineered to store and release energy from the impact of his... Altitude training: Challenging conventional wisdom. The Rift Valley in Kenya is a world-renowned destination for altitude training As elite athletes prepare for the 2012 London Olympics, many will be seeking to maximise their impact with training sessions at high altitudes. 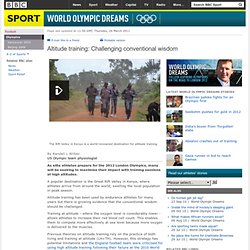 A popular destination is the Great Rift Valley in Kenya, where athletes arrive from around the world, swelling the local population in peak season. Altitude training has been used by endurance athletes for many years but there is growing evidence that the conventional wisdom should be challenged. Training at altitude - where the oxygen level is considerably lower - allows athletes to increase their red blood cell count. This enables them to compete more effectively at sea level because more oxygen is delivered to the muscles. Previous theories on altitude training rely on the practice of both living and training at altitude (LH+TH). "Live high-train low" (LH+TL) altitude training is a different method. "Live high-train low": Optimum conditions Possible threat? 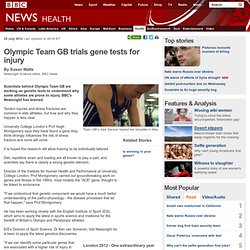 Tendon injuries and stress fractures are common in elite athletes, but how and why they happen is less clear. University College London's Prof Hugh Montgomery says they have found a gene they think strongly influences the risk of stress fracture and more will come. It is hoped the research will allow training to be individually tailored. Diet, repetitive strain and loading are all known to play a part, and scientists say there is clearly a strong genetic element. Director of the Institute for Human Health and Performance at University College London, Prof Montgomery carried out groundbreaking work on genes and fitness in the 1990s, most notably the "ACE" gene, thought to be linked to endurance.

London 2012 Olympics: how technology is aiding Team GB. “After one session I became a lot more aerodynamic,” explained Lucy Hall, one of the domestiques aiming to help Helen Jenkins win gold in the women’s triathlon competition. “I worked on my shoulder position, got a lot more narrow. My shoulders were quite relaxed and I needed to teach my body how to bring my shoulders in without becoming tense. "With the reviews from here, I have been successful, though. In terms of energy, you can gain 10 or 15 watts. Olympic film highlights technology support for British athletes. Subscribe Shelly WoodsBAE Systems BAE Systems 12 January 2012 BAE Systems' engineering support for the UK's Wheelchair Racers has been highlighted in a new film produced by the UK's Foreign and Commonwealth Office. 'Game Changer: Britain prepares' tells the amazing stories of people across the UK preparing for the London 2012 Olympic and Paralympic Games. 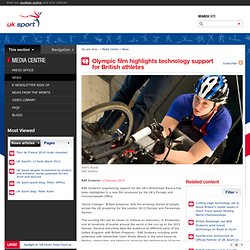 This exciting film will be shown to millions on television, in Embassies and at hundreds of events around the world in the run-up to the 2012 Games. As part of a five year technology partnership with UK Sport launched in 2008, engineers at BAE Systems have been working with over 20 sports teams including taekwondo, track cycling, skeleton, sailing, short track speed skating, athletics, canoeing (slalom and sprint), badminton, basketball, wheelchair racing, swimming, modern pentathlon and shooting. William Hague MP said: "2012 is an exciting year for all of us. Back to news listing. Faster, higher, stronger - with technology's help. Since the days of woollen shorts and cinder track, athletic performance has kept on improving. 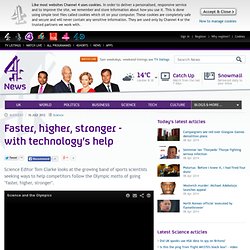 As time goes by, there have simply been more and more people on the planet - so there are more exceptional athletes to choose from nutrition, medicine and training facilities have improved steadily, too. But in most sports it is technology that is making the biggest difference to how far, how high, or how fast people can go. At Loughborough University, they are designing power into pairs of sprinters spikes. Using a process called 3D printing, the stiffness is built into the shoes. The spiked sole is laid down layer by layer. They are then matched to the athlete. Take cycling. Doubled distances Lighter, more aerodynamic javelins have nearly doubled the distances they can be thrown: there has been a 95 per cent improvement since 1936. Fibreglass and carbon fibre did the same for pole vault, with an 86 per cent improvement since 1918. The Science Behind the Bike. Iten. Rocky III Training 2 quotGonna Fly Nowquot in High Definition (HD) WOW.