Angela Duckworth. Heidi Grant Halvorson: The Incredible Benefits of a “Get Better” Mindset. The Science of Developing Mental Toughness in Health, Work, and Life. Have you ever wondered what makes someone a good athlete? Or a good leader? Or a good parent? Why do some people accomplish their goals while others fail? What makes the difference?

Usually we answer these questions by talking about the talent of top performers. But I think we all know there is more to the story than that. Is Pride Really a Sin? Pride is often considered a negative force in human existence—the opposite of humility and a source of social friction. 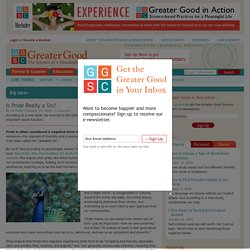 It’s even been called the “deadliest sin.” But is it? Not according to psychologist Jessica Tracy, author of the new book Take Pride: Why the Deadliest Sin Holds the Secret to Human Success. She argues that pride, like other human emotions, is part of our evolutionary heritage, helping us to survive and thrive in cooperative societies by inspiring us to be the best humans we can be. Pride makes us feel good, and it’s an indication to ourselves that we are behaving in a way congruent with the values of our society, says Tracy. “Pride makes us care about how others see us and—just as important—how we see ourselves,” she writes. She recounts results from several research studies to help demonstrate the ways pride impacts us behaviorally and socially.

The dark side of pride. Almost everyone who is unhappy with life is unhappy for the same reasons — Quartz. This Is The Research-Backed Way To Increase Grit. Ever feel like you just wanna give up on something? 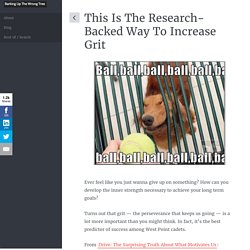 How can you develop the inner strength necessary to achieve your long term goals? Turns out that grit — the perseverance that keeps us going — is a lot more important than you might think. In fact, it’s the best predictor of success among West Point cadets. From Drive: The Surprising Truth About What Motivates Us: The best predictor of success, the researchers found, was the prospective cadets’ ratings on a noncognitive, nonphysical trait known as “grit”—defined as “perseverance and passion for long-term goals.” Stanford researcher Catharine Cox studied 301 eminent historical figures. From Grit: The Power of Passion and Perseverance: “…high but not the highest intelligence, combined with the greatest degree of persistence, will achieve greater eminence than the highest degree of intelligence with somewhat less persistence.” So we all need more grit. In 2013 Angela Duckworth was awarded the MacArthur “Genius” Award for her work on grit.

Musings on Mastery, Creativity and Sisu. 80 3Share Synopsis Adversities and setbacks can sometimes act as a catalyst for growth. 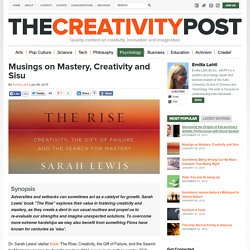 Sisu - Transforming Barriers into Frontiers. A Navy SEAL Explains 8 Secrets To Grit And Resilience. Sometimes you just want to quit. 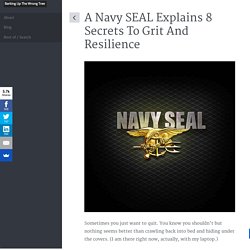 You know you shouldn’t but nothing seems better than crawling back into bed and hiding under the covers. (I am there right now, actually, with my laptop.) The emerging science of grit and resilience is teaching us a lot about why some people redouble their efforts when the rest of us are heading for the door. Research is great, but it’s always nice to talk to someone who’s been there firsthand, and to see how theory holds up against reality. 12-Item Grit Scale. What sets high achievers apart? In her 20s, Angela Lee Duckworth, PhD, tried out a couple of different career paths, working as a management consultant and a middle-school teacher. 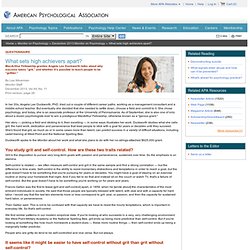 But eventually she decided that she needed to settle down, choose a field and commit to it. Pretty, Witty, and Gritty? Fiona Parashar, MAPP UEL, 2009 runs Leadership Coaching in the UK, specialising in positive psychology coaching to build flourishing leaders and teams in the media, advertising, and communications sectors. 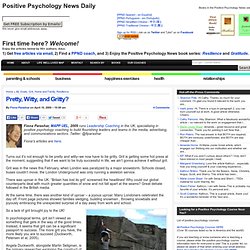 Twitter: @fiparashar Fiona's articles are here. Turns out it’s not enough to be pretty and witty–we now have to be gritty. Angela Duckworth on How to Develop Grit. Angela Duckworth and the Research on 'Grit' Before she was a psychology professor, Angela Duckworth taught math in middle school and high school. She spent a lot of time thinking about something that might seem obvious: The students who tried hardest did the best, and the students who didn't try very hard didn't do very well. Duckworth wanted to know: What is the role of effort in a person's success? Now Duckworth is an assistant professor at the University of Pennsylvania, and her research focuses on a personality trait she calls "grit. " She defines grit as "sticking with things over the very long term until you master them. " Grit: It's what separates the best from the merely good.

Backbone, chutzpah, fortitude, guts, stick-to-it-iveness: All words that describe what separates brilliant slackers from the simply talented who excel through a passionate yet steady approach. 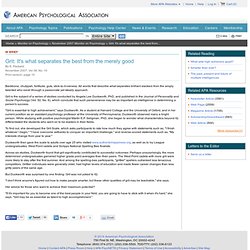 Grit is the subject of a series of studies conducted by Angela Lee Duckworth, PhD, and published in the Journal of Personality and Social Psychology (Vol. 92, No. 6), which conclude that such perseverance may be as important as intelligence in determining a person's success. "Grit is essential to high achievement," says Duckworth. As a student at Harvard College and the University of Oxford, and in her current position as an assistant psychology professor at the University of Pennsylvania, Duckworth observed many a bright person. While studying with positive psychologist Martin E.P. Seligman, PhD, she began to wonder what characteristics beyond IQ differentiated the students who went on to be leaders in their fields.

But Duckworth was surprised by one finding: Grit was not yoked to IQ.