Earth-orbiting satellite can be used by anyone 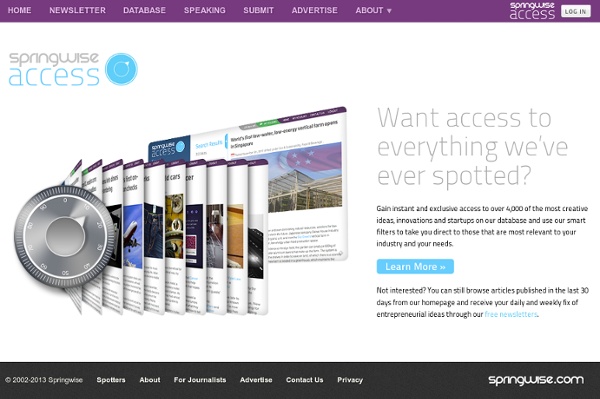 Gain instant and exclusive access to over 5,000 of the most creative ideas, innovations and startups on our database and use our smart filters to take you direct to those that are most relevant to your industry and your needs. Not interested? You can still browse articles published in the last 30 days from our homepage and receive your daily and weekly fix of entrepreneurial ideas through our free newsletters.

First "scan to print" 3D printing shop in France Jan.16, 2013 After the first 3D printing shop announced its opening in Paris, last week another 3D printing shop is opened in France near Toulouse. Digiteyezer teamed up with Nailloux Fashion Village and Open Studio and presented an amazing attraction during the Sales week from Jan 9th to Jan 12th in Nailloux. Digiteyezer installed its EASYtwin 3D photo-kiosk in the Open Studio store and this "scan-to-print" solution, named Alterego, had been used for scanning and printing 3D figurines of consumers in a winter sport suit. EASYtwin is the first fully automatic 3D kiosk providing a "scan to print" solution to the consumer market. It is a standalone 3D kiosk that can be installed in any public area or boutique by just plugging an AC/DC socket.

10 Most Creative Packaging Design One of the things that identifies a product is its packaging. Qualified and differentiated packaging design is a must for a product in today’s highly competitive world. There are hundreds of companies manufacturing the same kind of products, what distinguishes one product from another is its packing design. A packing design can be bizarre, cool, creative, weird or unusual, but it just should be different. Even a product is not better than its competitors, it can still sell itself with a creative design.

Tim O'Reilly Speaks about the Crowdsourcing Community Tim O'Reilly is such a wonderful speaker. I met him once at Tools of Change, in New York City. The conversation was very brief but I quickly realized why people gravitate to the man. During this TEDMED talk O’Reilly speaks about the power of communities. crowdfunding / Crowdfunding Please request to get permission to edit this page. I approve people who appear legitimate so it helps to add a message with your request. Due to overwhelming amount of requests and spam, I am not activating any editors so instead please just send a brief description and URL of the crowdfunding project that you would like listed here. That is the main reason why people want edit access (as opposed to enhancing the article).

Willa Shalit: Ethical Fashion: The New Luxury In an arena long defined by unrestrained spending on diamonds, designer dresses and exclusive resorts, the idea of "luxury" is being revised by none other than the United Nations. Who'd have imagined it? In a span of ten days, Simone Cipriani and Ilaria Venturini Fendi traveled from Europe to Rio to Haiti and back again. Cipriani, the effervescent head of the U.N.'s Ethical Fashion Initiative, made sure that Haiti was a centerpiece of the tour, not an after-thought.

From idea to a company: Prototyping and manufacturing on a Makerbot 3D printer Jan.21, 2013 Square, owned by Twitter inventor Jack Dorsey, is a handful mobile wallet app that offers sales data to small businesses. Square is famous for its white plastic card reader, a device that lets small businesses use phones and tablets to accept credit cards. Chris Milnes found Square card reader is extremely useful for his business, but he noticed this small card reader tends to spin and twist while swiping credit cards.

hope you’re not too tired to read this… Check this out! As many curbs as I’ve hit, I might just need these tires! Resilient Tech has been testing these out for some time now, developing them for the military. Its a radical new design by Michelin and made in South Carolina. Crowdsourcing and Crowdfunding Explained - The Productive Will Rule the World The smart folks at Crowdsourcing.org have produced a short animated film narrated by Founder, Carl Esposti that describes the four different ways Crowdsourcing works and the five different categories of things you can do with crowdsourcing. It’s an enjoyable overview that starts in the 1700’s. Enjoy… Here are the crib notes from the video. It breaks crowdsourcing into the following 5 categories: Tap the crowd for: Crowd Creativity - creative projects Distributed Knowledge - collect and organize knowledge Open Innovation - use the crowd to develop and test new ideas Cloud Labor - access an on-demand scalable workforce Crowdfunding - use the crowd to raise capital

13 Crowdfunding Websites to Fund Your Business Who needs banks? Crowdfunding websites can help you find a community of small investors to fund your business, without the risks of traditional financing. Here is a list of crowdfunding sites. Some sites focus on funding creative projects, others sites focus on meeting specific needs in the marketplace or community. So don’t let access to capital hold you back — let the crowd fund you.