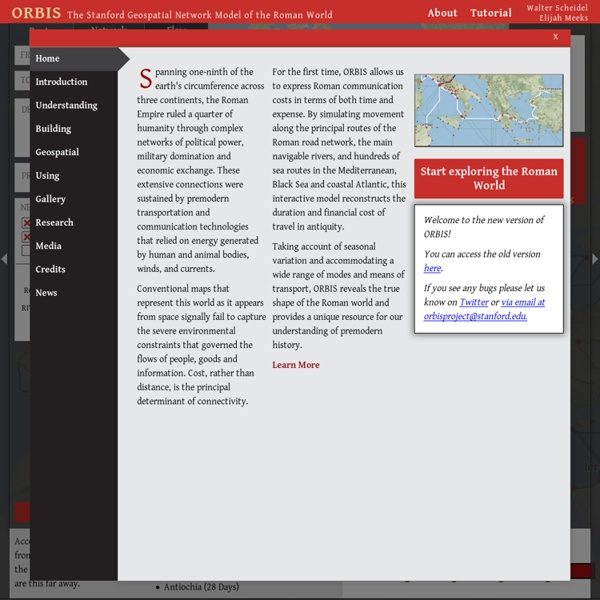 In the aggregate, our model simulations make it possible to reconfigure conventional maps of the Roman Empire to express the relative cost of transfers from or to a central point as distance. This perspective captures the structural properties of the imperial system as a whole by identifying the relative position of particular elements of the network and illustrating the impact of travel speed and especially transport prices on overall connectivity. Distance cartograms show that due to massive cost differences between aquatic and terrestrial modes of transport, peripheries were far more remote from the center in terms of price than in terms of time. Due to an unexpectedly high volume of traffic to the site, performance of the routing map and interactive cartogram are not what they should be. If you experience delays performing route calculations or rendering the map, you can try refreshing the map by zooming in or out.

Periodis Web - Maps to be Used for the History of Europe Euratlas Periodis Web shows the history of Europe through a sequence of 21 historical maps, every map depicting the political situation at the end of each century. Here, on the left, are 21 mini-maps giving access to 21 full maps and to 84 quarters of maps with more detailed views of the states, provinces and main cities.Moreover, each map offers a historical gazetteer. Thus you can highlight in red each sovereign state and in green each dependent entity. See the Map Legend for more details. Navigation through the atlas is easy: on the left side of the pages, you simply need to choose a century for temporal navigation. French and German versions of this historical atlas are also provided and you can view them by clicking on the small flags at the top of the pages.

Home - Classics - LibGuides at Credo Reference Credo LibGuides can be linked to from your institution's webpage. For LibGuides subscribers, these guides may be freely copied and modified to create or supplement your own LibGuides. Learn how to copy a LibGuide. When clicking on the links, your Credo account is accessed by IP authentication or through your institution's proxy server. For help with access issues, contact libguides@credoreference.com Our LibGuides work best for institutions with a Credo Academic Core subscription. What Historians Want from GIS By J. B. "Jack" Owens awmc - ancient world mapping center Keeping abreast of the ever-expanding set of resources relevant to the geography and mapping of the ancient world is a Herculean task and this page does not attempt to do that, rather it aims to provide a basic set of initial references for the community. AWMC is always happy to consult with scholars and community members seeking to find certain, specialized resources. Print Resources Compendia W. Smith. 1854.

Gracchi Brothers The social and political landscape of the Roman world was about to undergo an abrupt transformation in the Late Republic. The emergence, and eventual assassination of the Gracchus brothers, Tiberius and Gaius, is often considered the first major step towards the fall of the Roman Republic. While Roman class and social affairs had for centuries consisted of machinations by various individuals to get their way (such as the Plebs withdrawal from Rome in the early Republic), the activities of the Gracchi completely altered the state of Roman politics. The careers of these two men were marked by riots, murder, and ultimately, outright manipulation of the common population to achieve their goals. This political behavior would become increasingly more prominent in the 100 years from their time, through to Caesar and the eventual rise of Augustus.

Infographics - Own your Information I am a Visual Arts teacher, just so you might start to understand my next comment. I love good Infographics ! I can not think of another technique that condenses the essence of a message down into a more accessible and easily understood medium.

Warburg Institute digital copy antiquities Catalogue Articles You are not logged in | My saved items (0 items) | Login Give Feedback Explore Related Searches Great Britain Historical Geographical Information System (GBHGIS) The Great Britain Historical Geographical Information System is a unique digital collection of information about Britain's localities as they have changed over time. Information comes from census reports, historical gazetteers, travellers' tales and historic maps assembled into a whole that is much more than the sum of its parts. This site tells you more about the project itself and about historical GIS.

awmc - strabo map - ancient mediterranean world x The Strabo Application is a georeferenced, interactive digital map of the Ancient Mediterranean World to accompany the text of the Geography translated by Duane W. Roller and published by Cambridge University Press (2014). The application is produced by the Ancient World Mapping Center (AWMC) at The University of North Carolina, Chapel Hill, and marks all locatable settlements, features, and peoples mentioned by Strabo, as determined by the translator and presented according to his specifications. The application works best with Firefox, Chrome, or Safari. Secrets of Lost Empires by Dennis Gaffney Aqueducts are one of the wonders of the Roman Empire. These graceful structures are not only majestic, but are engineering marvels that survive to this day. In "Construct an Aqueduct," you are hired as Chief Water Engineer by the Roman Emperor. Your job: to build an aqueduct that will supply the Roman city of Aqueductis with clean water to private homes, public baths and glorious fountains. Succeed, and citizens of Aqueductis will drink clean water and bathe happily.

Google Maps Launch Google MapsLaunch Maps in LUNA Browser The over 120 historical maps in the Google Maps have been selected by David Rumsey from his collection of more than 150,000 historical maps; in addition, there are a few maps from collections with which he collaborates. These maps can also be seen in the Gallery layer of Google Earth, Rumsey Historical Maps layer, and in the Google Earth viewers on this website. All the maps contain rich information about the past and represent a sampling of time periods (1680 to 1930), scales, and cartographic art, resulting in visual history stories that only old maps can tell. Each map has been georeferenced, thus creating unique digital map images that allow the old maps to appear in their correct places on the modern globe.