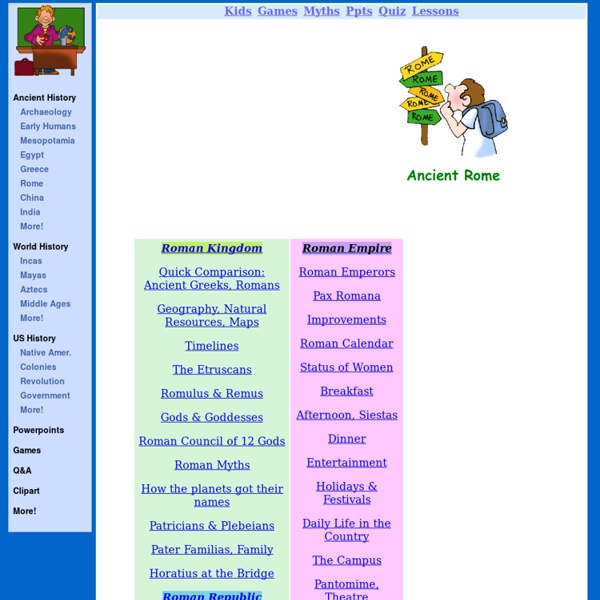 The Extent of the Roman Empire Time has seen the rise and fall of a number of great empires - the Babylonian, the Assyrian, the Egyptian, and lastly, the Persian. Regardless of the size or skill of their army or the capabilities of their leaders, all of these empires fell into ruin. History has demonstrated that one of the many reasons for this ultimate decline was the empire’s vast size - they simply grew too large to manage, falling susceptible to external, as well as internal, forces. One of the greatest of these empires was, of course, the Roman Empire. Over the centuries it grew from a small Italian city to control land throughout Europe across the Balkans to the Middle East and into North Africa. Population & Spread Warburg Institute digital copy antiquities Catalogue Articles You are not logged in | My saved items (0 items) | Login Give Feedback

LacusCurtius — Smith's Dictionary of Greek and Roman Antiquities LacusCurtius Educational Resource: a Selection of Articles from A 19th-Century Classical Encyclopaedia William Smith, D.C.L., LL.D.: A Dictionary of Greek and Roman Antiquities John Murray, London, 1875. This single volume, of 1294 pages in rather fine print set in two columns and amounting to well over a million words, is a treasure trove of information on the ancient world, and was for many years a standard reference work, carried thru several British and American editions from the first in 1842 to the last in 1890‑91 with relatively few alterations.

The Roman Domus The Roman domus was much more than a place of dwelling for a Roman familia. It also served as a place of business and a religious center for worship. The size of a domus could range from a very small house to a luxurious mansion. In some cases, one domus took up an entire city-block, while more commonly, there were up to 8 domus per insula (city-block). All domus were free-standing structures. Some were constructed like modern-day townhouses with common walls between them, while others were detached.

Home - Classics - LibGuides at Credo Reference Credo LibGuides can be linked to from your institution's webpage. For LibGuides subscribers, these guides may be freely copied and modified to create or supplement your own LibGuides. Learn how to copy a LibGuide. When clicking on the links, your Credo account is accessed by IP authentication or through your institution's proxy server. For help with access issues, contact libguides@credoreference.com Why Roman concrete still stands strong while modern version decays Their structures are still standing more than 1,500 years after the last centurion snuffed it: now the Romans’ secret of durable marine concrete has finally been cracked. The Roman recipe – a mix of volcanic ash, lime (calcium oxide), seawater and lumps of volcanic rock – held together piers, breakwaters and harbours. Moreover, in contrast to modern materials, the ancient water-based structures became stronger over time. Scientists say this is the result of seawater reacting with the volcanic material in the cement and creating new minerals that reinforced the concrete. “They spent a tremendous amount of work [on developing] this – they were very, very intelligent people,” said Marie Jackson, a geologist at the University of Utah and co-author of a study into Roman structures.

Maecenas: Images of Ancient Greece and Rome 408,330 visitors before 21 March, 2002, visitors since then Images are copyrighted, but may be used for non-commercial purposes. Click here to see the images If the search engine is out of service, you can use back-up search engine. Also, the back-up search engine may index recent additions of images sooner than the main search engine does. How Archaeologists Crammed 1500 Years of Roman History Into One Map Rome wasn’t built in a day, so it stands to reason that a modern map of the ancient city might take a considerable amount of time as well—almost a decade, to be precise. The task was a Sisyphean one (though that was a myth from Ancient Greece.) How do you represent 1,500 of the city’s 3,000 years’ worth of history in print format, showing how Rome evolved in each era, what was destroyed, what remained, how its citizens lived and died, and which streets they walked on?