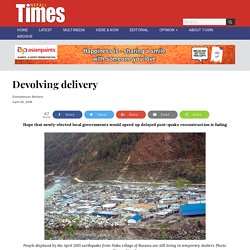 But nine months after local elections were held, there has been no perceptible difference in delivery. Only 15% of families displaced by the 2015 earthquakes have rebuilt their homes, and 85% are still living in temporary shelters, damaged buildings or in rented rooms. Donors speak – Earthquake 2015. Pic: Stéphane Huët On the eve of the second anniversary of the 2015 earthquake, donors helping to rebuild Nepal said that ‘reconstruction momentum has picked up’ but ‘some people and communities are yet to receive help’. 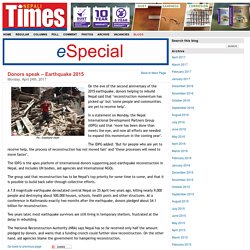 In a statement on Monday, the Nepal International Development Partners Group (IDPG) said that ‘more has been done than meets the eye, and now all efforts are needed to expand this momentum in the coming year’. The IDPG added: ‘But for people who are yet to receive help, the process of reconstruction has not moved fast’ and ‘these processes will need to move faster’. The IDPG is the apex platform of international donors supporting post-earthquake reconstruction in Nepal, and includes UN bodies, aid agencies and international NGOs. The group said that reconstruction has to be Nepal’s top priority for some time to come, and that it is possible to build back safer through collective efforts. Back at the epicenter. Two years ago, the view of Barpak from this spot was one of utter devastation. 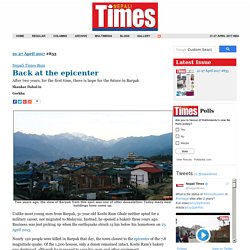 Today many new buildings have come up. Unlike most young men from Barpak, 31-year-old Koshi Ram Ghale neither opted for a military career, nor migrated to Malaysia. Instead, he opened a bakery three years ago. Business was just picking up when the earthquake struck 15 km below his hometown on 25 April 2015. Nearly 120 people were killed in Barpak that day, the town closest to the epicentre of the 7.8 magnitude quake. He waited six months for help that did not come, salvaged timber and stones to build a temporary home and decided to borrow Rs 700,000 from a local cooperative to restart his bakery in the upper part of the town. Building back unsafe. Property owners in Gongabu continue to flout the building code despite the death and destruction there in the 2015 earthquake Gopen Rai PAST, PRESENT, FUTURE: An illegal concrete highrise has sprung up from amidst the ruins of buildings that collapsed in Gongabu in 2015, killing at least 28 in this neighbourhood alone. 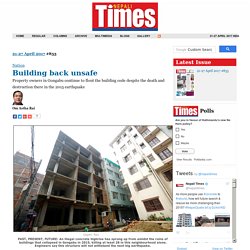 Engineers say this structure will not withstand the next big earthquake. Search, locate, rescue in collapsed concrete houses. The 2015 earthquake convinced many to use reinforced concrete for reconstruction, but this will make search and rescue more difficult in the next Big One FUTURE SHOCK: The Morgan College of Engineering in Dhapasi (left) had a permit only for a three-storey structure. 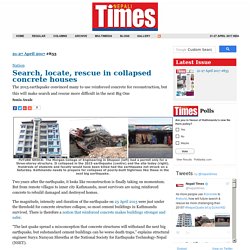 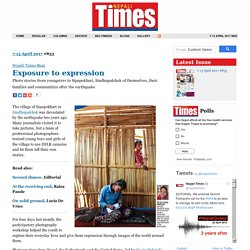 Many journalists visited it to take pictures, but a team of professional photographers trained young boys and girls of the village to use DSLR cameras and let them tell their own stories. Permanent scars, temporary relief. Pics: RAJNEESH BHANDARI RISING FROM RUINS: Ruined homes, temporary shelters and a home being rebuilt in a village in Dolakha. . 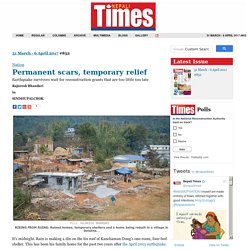 It’s midnight. Rain is making a din on the tin roof of Kanchaman Dong’s one-room, four-bed shelter. This has been his family home for the past two years after the April 2015 earthquake. Kanchaman tried to ignore the rain and cold, and just hoped for a warm sunrise in the village of Duwachaur, a jolting 8-hour ride across a rough mountain road. Broken promises. Two years after the earthquake only about half the money pledged to Nepal by donors has actually been received Shreejana Shrestha FALLING BETWEEN CRACKS: Many families like this one in Nuwakot are still fixing the paperwork for their rebuilding grants even as Nepal waits for donors to make good on their pledges. 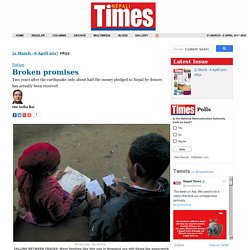 On the first anniversary of the earthquake this time last year, most media coverage played the same angle: slow reconstruction, delayed relief and the $4 billion pledged by donors squandered. On the second anniversary of the disaster, it will be the same old story. To be sure, donors did pledge more than $4.1 billion for Nepal’s reconstruction at a conference in Kathmandu in June 2015, exactly two months after the earthquake. Two years later, only $2.73 billion has actually been received by Nepal. The Post Disaster Recovery Framework prepared by the NRA estimated that Nepal requires $9.38 billion for rebuilding. But Norway says it announced funding without pledging new money.

Nepalese police tear down earthquake victim camp in capital. A woman cries as her temporary home was torn down by police in a quake victims’ shelter in downtown Kathmandu, Nepal, Tuesday, March 14, 2017. 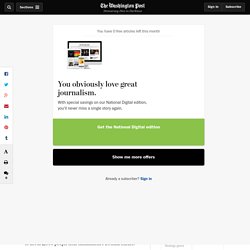 Police tore down hundreds of temporary homes in the Nepalese capital where people who lost their homes in the 2015 earthquake have been living for two years. (Niranjan Shrestha/Associated Press) By Binaj Gurubacharya | AP By Binaj Gurubacharya | AP March 14. Gyewali out, Pokharel in again. Govinda Pokharel The government had accused National Reconstruction Authority (NRA) chief Sushil Gyewali of delaying earthquake relief and threatened to sack him. 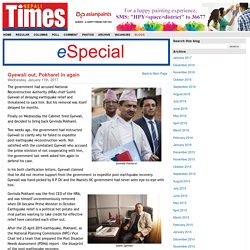 But his removal was itself delayed for months. Finally on Wednesday the Cabinet fired Gyewali, and decided to bring back Govinda Pokharel. Two weeks ago, the government had instructed Gyewali to clarify why he failed to expedite post-earthquake reconstruction work. Not satisfied with the combatant Gyewali who accused the prime minister of not cooperating with him, the government last week asked him again to defend his case.

Restoring our faith in restoration. When a god decides to remain hidden from humans, restoring its temple becomes a complex challenge for devotees Pics: Alok Tuladhar RESTORATION FRAMEWORK: The Panchamukhi Hanuman temple being readied for restoration after it suffered major structural damage from multiple earthquakes over the years. In 2014 , when the authorities decided to renovate the ageing Panchamukhi Hanuman temple in Kathmandu to mitigate possible damage from future earthquakes, they faced an unexpected challenge. Only designated priests were allowed to enter the sanctum room where the Hanuman figure is kept.

4 Things to Know About Post-Earthquake Aid and Recovery in Nepal - The Asia Foundation. A year and a half after a series of major earthquakes struck Nepal, causing widespread devastation and killing nearly 9,000 people, the pace of reconstruction remains painfully slow. One month ago, the prime minister announced an additional $1,000 in relief per household, which would raise the total resources available to each affected household to $3,000. However, the National Reconstruction Authority (NRA), which plans to distribute the money in three installments, has so far been unable to complete the distribution of even the first installment of $500 to affected households. Many people who lost their homes have now spent two monsoon seasons and one winter in self-constructed temporary shelters, and several people died last winter from the cold and diseases.

With winter imminent, thousands are still at risk. Key messages from the second wave of research are: The republic of insomnia. Nepalis face an epidemic of post-traumatic stress and sleep deprivation as the country copes with the aftermath of the earthquake and is tangled in endless turmoil Gopen Rai Going by the number of pictures in the media of Members of Parliament dozing off in the august House, you would think lack of sleep is the least of Nepal’s problems. But recent studies have shown that insomnia has become a national epidemic, spawning a host of other physical and mental ailments in the population.

My Republica - ADB, government launch project for reconstruction of earthquake-hit schools. –Kenichi Yokoyama, Country Director, Asian Development Bank Nepal Resident Mission. Reconstruction grant is Dasain allowance. Earthquake survivors are using the first tranche of their home reconstruction grant for everything but reconstruction Pics: Shreejana Shrestha TIMELY GRANT: Immediately after receiving the first instalment of the housing grant, Radhika Dahal spent part of it to pay off her loan, and is planning to use the remaining amount for Dasain expenses. In perfect harmony. Done right, Kathmandu’s traditional architecture would add to the city’s aesthetics and make it more seismic-resistant. Rs 50,000 likely for owners of quake-damaged houses.

Correspondent. KATHMANDU -- I didn't expect to cover so much tragedy when I began my posting in Nepal. My three-year tenure was punctuated by natural disasters, deadly protests and a months-long blockade along the Nepal-India border that choked off essential supplies to a country already reeling from its worst earthquake in 80 years. Along the way, I travelled to some of the world's most inaccessible and stunning spots -- often on foot -- and met some extraordinary people.

Initially, I could scarcely believe that I was being paid to spend my days walking in the Himalayas, where gods dwell and men die. A world more magical and moving than any place I had ever known. (AFP / Roberto Schmidt) Second monsoon in the earthquake zone. Builders of Barpak. EMPOWERING LIVES: Gopal Biswokarma is the owner of a local metal welding workshop. Resh Bahadur Ghale’s saw mill has been running non-stop this rainy season, slicing large planks of wood since Barpak’s 133 kW micro-hydro plant started generating power again in April.

Down and Out. Possible correlation between migration, mental health and an increase in suicide rates. Nepal agrees to speed up aid grants to quake victims. Reconstruction report. Photo: Bikram Rai Nearly 14 months after last year’s earthquake, only 1,000 survivors have received grants from the government to rebuild their houses. Nepali Times Buzz. A village in eastern Nepal is emptying because it is just too difficult to find water. A Year After the Quake, Nepal Is Still a Mess. Reconstruction report. A luxury hotel in Nepal is still hosting a camp for earthquake survivors, over one year later — Quartz. KATHMANDU, Nepal— On a calm, clear afternoon last April, Bishnu Karki settled in for a nap in his home. A Year After Nepal’s Killer Quake, the Tamangs Continue to Struggle on the Margins. Nepal: A year after the earthquakes.

What's New - Press Room - World Education, Inc. Nepal earthquake: Patience wearing thin one year on. Valley faces petrol shortage again. Photo blog from Nepali Times » Blog Archive » Bhaktapur: one year later. The Spirit of Nepal. Nepal has done little to protect itself from next 'big one' Lighting up Catbells for Nepal. Nepal one year after the earthquake: Child labour, child brides, homeless kids. Comment article by Mallika Shakya on Nepal earthquake: The cracks are still open. Temblor displaced left in a lurch. No end in sight to the suffering of people. Hoping against hope as reconstruction goes on. Nepal marks anniversary of devastating earthquake. Quake survivors still waiting for govt to walk the talk.