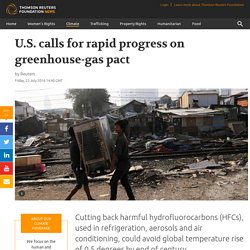 Secretary of State John Kerry urged U.N. nations on Friday to reach a deal to cut the use of a family of powerful greenhouse gases and take a big step towards keeping global warming in check. Officials from nearly 200 countries are meeting this week to hammer out an agreement to cut the use of hydrofluorocarbons (HFCs), which are used in refrigeration, aerosols and air conditioning, by amending the landmark Montreal Protocol. Australian entrepreneurs sell cans of clean air to China. China's breathtaking appetite for all things Australian - iron ore, real estate and baby formula - has gone sky high. 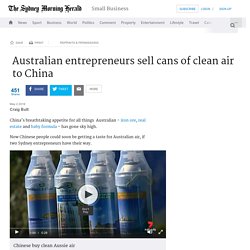 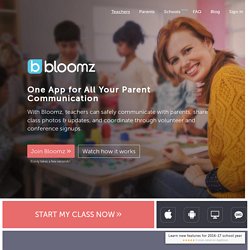 Class Updates:Share class updates about the day’s learnings or send reminders for assignment due dates, registration deadlines, etc. Photo Sharing:Share special moments from class or a recent field trip so parents can be engaged even when they can’t be there in person. Coordinate. Reminders & Class Calendar:Plan class activities and organize field trips, or track parent-teacher meetings all in one place. Manage EventsSend invites, attach permission slips, track RSVPs, request and sign up volunteers and reminders make planning and participating easy. Starbucks trials recyclable cups in move to tackle landfill waste. Starbucks will trial a fully recyclable coffee cup in its UK shops, which could eventually divert huge numbers of cups away from landfill. 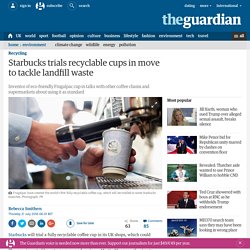 The cup, invented by entrepreneur and engineer Martin Myerscough, aims to reduce the environmental impact of the 2.5bn paper coffee cups used in the UK each year. Earlier this year it emerged that only one in 400 were recycled and the rest sent to landfill or incineration. This led to calls for a ban, an idea the government rejected. Conventional takeaway cups produced in bulk are made from paper but are laminated with plastic, making them difficult to recycle. The Frugalpac cup, which launches on Thursday, has a thin film liner designed to separate easily from the paper in the recycling process. 5 Fun Short Video Tools to Help You Jump In to Video Content Creation. Video is huge. 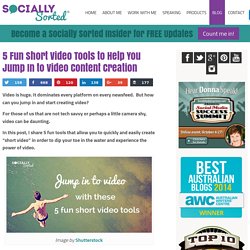 It dominates every platform on every newsfeed. But how can you jump in and start creating video? For those of us that are not tech savvy or perhaps a little camera shy, video can be daunting. In this post, I share 5 fun tools that allow you to quickly and easily create “short video” in order to dip your toe in the water and experience the power of video. Pin There’s no discounting the fact that YouTube is still massive, but more and more we are seeing the power of native video on Twitter, Facebook, Instagram, Linkedin. What’s native video? The ability for businesses to be able to use short video tools to create video content quickly and easily has become more important now that video has become a huge part of content on Facebook.

And what about Pinterest and LinkedIn – both showcase video in the newsfeed.

Icebreakers that Rock. We’re coming up fast on the beginning of another school year. 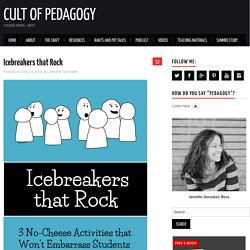 That means a new batch of students to get to know, students who need to be made comfortable in your classroom, and who need to get to know each other. Top secret pages of 9/11 report released to public. In a vault under the capitol, 28 pages of one of the country's most sensitive documents holding 9/11 secrets have been shelved for 13 years. 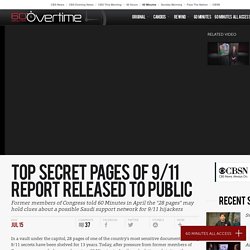 Today, after pressure from former members of Congress - many of whom spoke out on 60 Minutes in April - and relatives of victims, the pages have been released to the public. Former U.S. Senator Bob Graham, who helped write the 9/11 report and read the redacted pages, told correspondent Steve Kroft in April, the pages could reveal a "substantial" Saudi support network for the 9/11 hijackers while they were in the U.S.

"I think it is implausible to believe that 19 people, most of whom didn't speak English, most of whom had never been in the United States before, many of whom didn't have a high school education-- could've carried out such a complicated task without some support from within the United States," Graham told Kroft. With today's release, the question of Saudi Arabia's involvement is still unclear. Read the "28 pages" here.