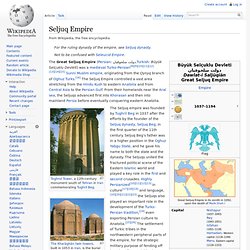 From their homelands near the Aral sea, the Seljuqs advanced first into Khorasan and then into mainland Persia before eventually conquering eastern Anatolia. Turko-Persian tradition. The composite Turko-Persian tradition[1] was a variant of Islamic culture.[2] It was Persianate in that it was centered on a lettered tradition of Iranian origin; it was Turkic insofar as it was for many generations patronized by rulers of Turkic background; it was Islamic in that Islamic notions of virtue, permanence, and excellence infused discourse about public issues as well as the religious affairs of the Muslims, who were the presiding elite.[1] Origins[edit] After the Arab Muslim conquest of Persia, Middle Persian, the language of Sassanids, continued in wide use well into the second Islamic century (eighth century) as a medium of administration in the eastern lands of the Caliphate.[1] Despite Arabization of public affairs, the peoples retained much of their pre-Islamic outlook and way of life, adjusted to fit the demands of the Islamic religion. 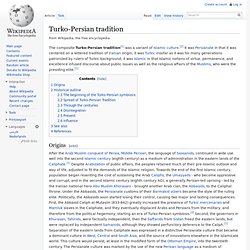 Before the Ghaznavids broke away, the Samanid rulership was internally falling to its Turkic servants. Historical outline[edit] Sokoto Caliphate. The Sokoto Caliphate is an Islamic spiritual community in Northern Nigeria, led by the Sultan of Sokoto (currently Sa'adu Abubakar). 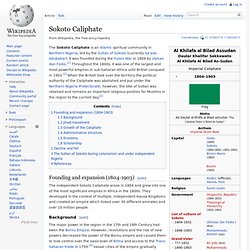 It was founded during the Fulani War in 1809 by Usman dan Fodio.[1] Throughout the 1800s, it was one of the largest and most powerful empires in sub-Saharan Africa until British conquest in 1903.[2] When the British took over the territory the political authority of the Caliphate was abolished and put under the Northern Nigeria Protectorate; however, the title of Sultan was retained and remains an important religious position for Muslims in the region to the current day.[2] Founding and expansion (1804-1903)[edit] The independent Sokoto Caliphate arose in 1804 and grew into one of the most significant empires in Africa in the 1800s.

They developed in the context of multiple, independent Hausa Kingdoms and created an empire which linked over 30 different emirates and over 10 million people. Pre-State Israel. Qanat. A qanāt (Persian: قنات, Arabic: قناة‎) is one of a series of well-like vertical shafts, connected by gently sloping tunnels. 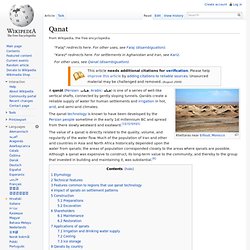 Qanāts create a reliable supply of water for human settlements and irrigation in hot, arid, and semi-arid climates. The qanat technology is known to have been developed by the Persian people sometime in the early 1st millennium BC and spread from there slowly westward and eastward.[1][2][3][4][5] Astronomy in medieval Islam. Islamic astronomy comprises the astronomical developments made in the Islamic world, particularly during the Islamic Golden Age (8th–15th centuries),[1] and mostly written in the Arabic language. 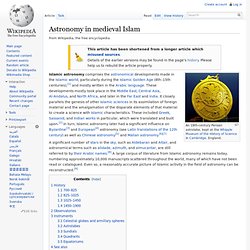 These developments mostly took place in the Middle East, Central Asia, Al-Andalus, and North Africa, and later in the Far East and India. It closely parallels the genesis of other Islamic sciences in its assimilation of foreign material and the amalgamation of the disparate elements of that material to create a science with Islamic characteristics. These included Greek, Sassanid, and Indian works in particular, which were translated and built upon.[2] In turn, Islamic astronomy later had a significant influence on Byzantine[3] and European[4] astronomy (see Latin translations of the 12th century) as well as Chinese astronomy[5] and Malian astronomy.[6][7] History[edit] Donald Hill (1993) divided Islamic Astronomy into the four following distinct time periods in its history: 700–825[edit]