Au resto, les CV l'assiette. Talkin’ ‘Bout Your Generation: The Impact of Applicant Age and Generation on Hiring-Related Perceptions and Outcomes. We conducted two studies to explore the impact of identifying a job candidate as either a 60-year-old, Baby Boomer, Gen-Y/Millennial, or 29-year-old on applicant perceptions and hiring-related outcomes. 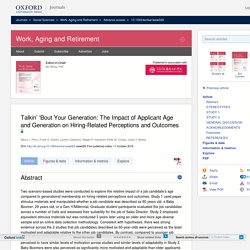 The first study employed a graduate school sample, whereas the second was conducted 3 years later and employed an MTurk sample that was older, more age diverse, and had more work experience. Across both studies, we found that a target described as an older applicant (60-years-old) was generally perceived to have the lowest levels of motivation and adaptability consistent with Hypothesis 1, whereas the same target was perceived to have the highest levels when described as a Gen-Y/Millennial. More generally, a review of the means suggests that the target was perceived more favorably when described on the basis of his generational membership compared to his age.

Jobs requiring social skills, preparation expected to grow most. Much of U.S. job growth over the past 35 years has been in occupations that require higher levels of education, training and experience, according to a recently released Pew Research Center report. 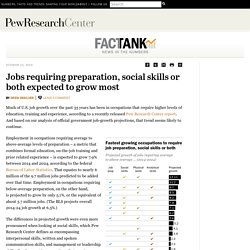 And based on our analysis of official government job-growth projections, that trend seems likely to continue. Employment in occupations requiring average to above-average levels of preparation – a metric that combines formal education, on-the-job training and prior related experience – is expected to grow 7.9% between 2014 and 2024, according to the federal Bureau of Labor Statistics. That equates to nearly 6 million of the 9.7 million jobs predicted to be added over that time. Employment in occupations requiring below-average preparation, on the other hand, is projected to grow by only 5.1%, or the equivalent of about 3.7 million jobs. Want To Attract The Right Job Candidates? Repel The Wrong Ones. 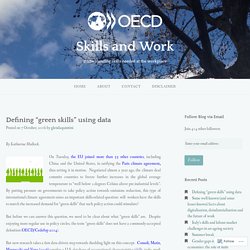 On Tuesday, the EU joined more than 55 other countries, including China and the United States, in ratifying the Paris climate agreement, thus setting it in motion. Negotiated almost a year ago, the climate deal commits countries to freeze further increases in the global average temperature to “well below 2 degrees Celsius above pre-industrial levels”. By putting pressure on governments to take policy action towards emissions reduction, this type of international climate agreement raises an important skills-related question: will workers have the skills to match the increased demand for “green skills” that such policy action could stimulate?

Are we on the verge of ‘peak human’? Consider for a moment what happened to the horse. 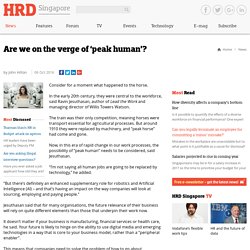 In the early 20th century, they were central to the workforce, said Ravin Jesuthasan, author of Lead the Work and managing director of Willis Towers Watson. The train was their only competition, meaning horses were transport essential for agricultural processes. How the Gig Economy Is Changing Work for Women. Reader Resource Position yourself for growth in 2017—join us live at the Entrepreneur 360™ Conference in Long Beach, Calif. on Nov. 16. 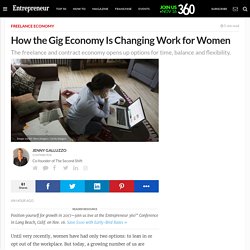 Save $100 with Early-Bird Rates » View the gender gap as productivity gap. Bek Frith, October 13, 2016 Many firms suffer a ‘glass pyramid’ effect with women concentrated in the lowest-paid roles Employers should view the gender pay gap as a productivity gap, according to chief executive of the Fawcett Society Sam Smethers. 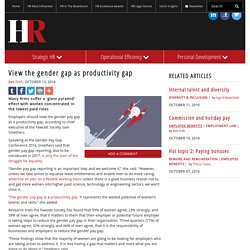 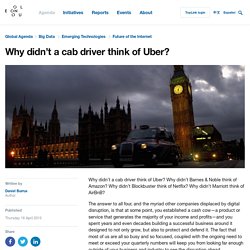 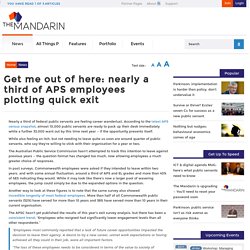 According to the latest APS census snapshot, almost 10,000 public servants are ready to pack up their desk immediately while a further 33,000 want out by this time next year — if the opportunity presents itself. While also feeling an itch, but not needing to leave quite so soon are around quarter of public servants, who say they’re willing to stick with their organisation for a year or two. Employer Branding: A Brand Equity-based Literature Review and Research Agenda - Theurer - 2016 - International Journal of Management Reviews. Timming 2016 HR BodyArt AM. Impact of Recruitment Process Outsourcing on Employer Branding. Bad recruitment experiences cost brands millions in lost customers. Interviewees may feel like they are in the spotlight during the recruitment process but the brands conducting the interview are under just as much scrutiny, as new research suggests a poor recruitment experience could turn candidates off that brand for life. 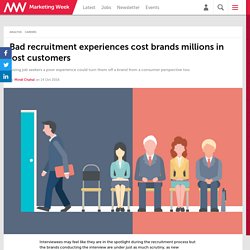 State of Talent Experience Report Summer 2016. Paper: Exploring the Divide Between Ban the Box Research, Policy and Advocacy ( 2016 Fall Conference: The Role of Research in Making Government More Effective) Interview: Civil service transgender ambassador Jacqui Gavin – "The civil service has changed a hell of a lot in the last 10 years" What’s your role in government? 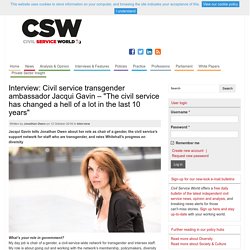 My day job is chair of a:gender, a civil-service-wide network for transgender and intersex staff. My role is about going out and working with the network’s membership, policymakers, diversity and inclusion leads, senior civil servants, and also external businesses. In many ways, I think the private sector has gone that much further than the public sector. Large PLCs can throw big budgets at promoting trans issues whereas civil service budgets are tight – and can be non-existent. What is holding back corporates from hiring more women on their boards. By Sharanya Dutta There are simply not enough women on the boards of companies. ‘The CS Gender 3000: The Reward for Change’, a new report by Credit Suisse that came out in September 2016, mapped 27,000 senior managers at about 3,000 large companies globally.

Diversity: Can bias be removed from recruitment? - Enterprise Times. At SuccessConnect last week SAP announced new features to reduce bias from recruitment processes for SuccessFactors. The press release reveals that the new functionality will not be available until later in the year. However, SAP will produce some guidelines on how companies can optimise their existing solutions as well as providing some guidance. So what lies behind these features? HR Key in Helping Employers Achieve Gender Equality. Page Content In many ways, it has been a watershed year for women, both on the world’s stage and in the workplace. Not only did Hillary Clinton become the first female U.S. presidential nominee—and possibly president-elect by the time this article goes to press—but working women were also a high legislative priority and a top focus in the war for talent.

Autistic people can add value to business. Bek Frith, October 27, 2016 I have 2 employers who have sons with autism. They recently contacted me to see if I could help them to set up a sheltered social enterprise to help their sons and others. If they wanted to take this ... How to keep millennials engaged throughout their federal careers. Disability Discrimination Persists. Blind recruitment: business advice on staff hiring - Crikey. Hiring Successful Teachers—Two New Studies Point to What Works and What Doesn't. A Study on Hew Hiring Strategies. Pros and Cons of Hiring Employees Through Online Recruiting Software.

No CV's recruitment process. How to Hire with Algorithms. Use gamification to recruit and retain talent. Use Social Media To Keep Passive Candidates Engaged  Chances are, your job postings, referral programs, and website career portal are not bringing in all the candidates you need – especially for hard-to-fill positions. So, recruiting passive job candidates is a smart move. Recruitment and Apprenticeship Training. Opinion: Degree apprenticeships can close the management skills gap. Helping your students win at career fairs. Does Training Improve Skill Match. Senator: Rigid hiring process pushes millennials from federal work. Workforce.