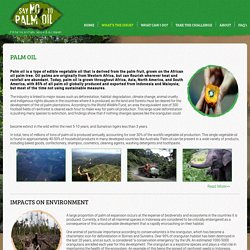 There is an increasing demand for palm oil that is sustainably certified in Europe and North America, including big names such as Walmart, Unilever and Nestle. As of 2011, CSPO represented over 10% of the global palm oil market but this has increased in recent years and is projected to increase in coming years. The certification process consists of reviewing existing production operations and identifying areas that must be improved to reach the CSPO standards to then be approved by a certification body. The standards are based on eight principles which have been retrieved from the RSPO website: 1. 2. 3. 4. 5. 6. 7. 8. 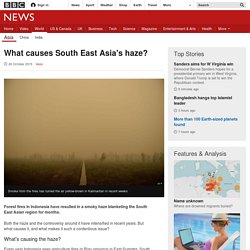 Both the haze and the controversy around it have intensified in recent years. But what causes it, and what makes it such a contentious issue? What's causing the haze? Every year Indonesia sees agriculture fires in Riau province in East Sumatra, South Sumatra, and parts of Kalimantan on Indonesian Borneo. The fires are said to be caused by corporations as well as small-scale farmers who use the slash-and-burn method to clear vegetation for palm oil, pulp and paper plantations. The fires often spin out of control and spread into protected forested areas. The problem has accelerated in recent years as more land has been cleared for expanding plantations for the lucrative palm oil trade.

The burnt land also becomes drier, which makes it more likely to catch fire the next time there are slash-and-burn clearings. Read more: Why are peat lands burning? What causes South East Asia's haze? Greenpeace Southeast Asia. Forest and peat fires are emerging as a global threat and are driving a public health emergency in Southeast Asia. 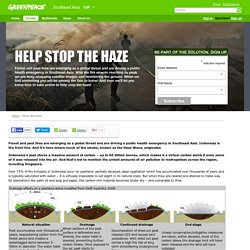 Indonesia is the front line. And it's here where much of the smoke, known as the Haze Wave, originates. Indonesia's peat stores a massive amount of carbon – up to 60 billion tonnes, which makes it a virtual carbon bomb if even some of it was released into the air. And that's not to mention the untold amounts of air pollution to metropolises across the region, including Singapore. Over 75% of fire hotspots in Indonesia occur on peatland: partially decayed, dead vegetation which has accumulated over thousands of years and is typically saturated with water – it is virtually impossible to set alight in its natural state. 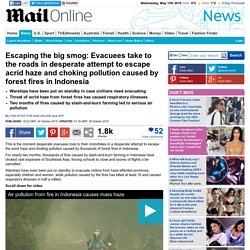 For nearly two months, thousands of fires caused by slash-and-burn farming in Indonesia have choked vast expanses of Southeast Asia, forcing schools to close and scores of flights o be cancelled. Warships have even been put on standby to evacuate victims from haze-affected provinces, especially children and women, while pollution caused by the fires has killed at least 10 and caused respiratory illnesses in half a million. Scroll down for video Air pollution from fire in Indonesia causes mass haze Loaded: 0% Progress: 0% MinimizeExpandClose. Can S-E Asia be haze-free by 2020?, Environment News. The start of the dry season in Indonesia is just around the corner and it will once again threaten the region with hazy skies. 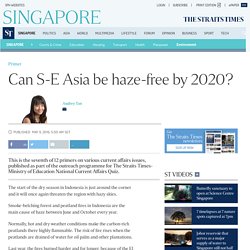 Smoke-belching forest and peatland fires in Indonesia are the main cause of haze between June and October every year. Normally, hot and dry weather conditions make the carbon-rich peatlands there highly flammable. The risk of fire rises when the peatlands are drained of water for oil palm and other plantations. Last year, the fires burned harder and for longer, because of the El Nino weather phenomenon, which led to prolonged hot and dry weather in the region. It resulted in an extended period of intense haze over parts of Indonesia and its neighbours - causing illness and death, grounding flights and closing schools. It seems likely that, this year, the haze in Singapore will not be as bad as that last year.

About The Big QuizThis primer is part of The Straits Times' initiative to discuss issues of national concern. These are steps in the right direction. Indonesia tells Singapore to mind its own business over the haze issue - Asian Correspondent. IN comments certain to rile Singaporean officials, Indonesia’s Environment and Forestry Minister Siti Nurbaya said Singapore should stop commenting on Indonesia’s efforts to combat haze and fires, and “focus on their own role.” 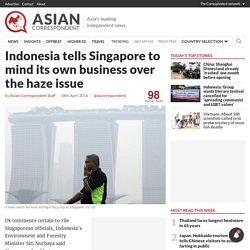 Indonesia’s neighbors, Singapore and Malaysia, are frequently victims of haze from fires in Indonesian territory in what seems to be an annual affair. Jakarta has often been accused of not doing enough to address the problem, and the minister’s comments suggest that it is irritated over the criticism it receives. While strongly defending her government’s commitment to curbing land and forest fires, Siti questioned Singapore’s role in doing the same. Haze - The National Environment Agency.