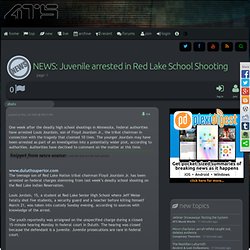 The younger Jourdain may have been arrested as part of an investigation into a potentially wider plot, according to authorities. Authorities have declined to comment on the matter at this time. www.duluthsuperior.com The teenage son of Red Lake Nation tribal chairman Floyd Jourdain Jr. has been arrested on federal charges stemming from last week’s deadly school shooting on the Red Lake Indian Reservation. Everyday Hero: Jeff May. High school student Jeff May managed to tackle a school shooter and save the lives of his fellow students. 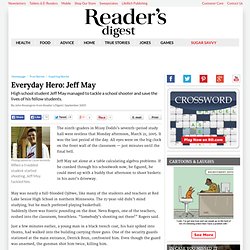 Photographed by Layne KennedyWhen a troubled student started shooting, Jeff May tackled him. The ninth-graders in Missy Dodds’s seventh-period study hall were restless that Monday afternoon, March 21, 2005. It was the last period of the day. All eyes were on the big clock on the front wall of the classroom — just minutes until the final bell. Jeff May sat alone at a table calculating algebra problems. NRA school security plan cites Hastings shooting that never happened. By Megan Boldtmboldt@pioneerpress.com Posted: 04/04/2013 12:01:00 AM CDT | Updated: about a year ago A National Rifle Association task force this week released a 225-page school security plan that called for armed police officers, security guards or staff members in every U.S. school. 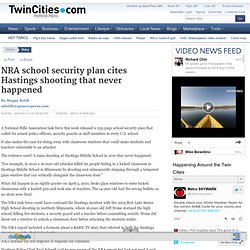 It also makes the case for doing away with classroom windows that could make students and teachers vulnerable to an attacker. The evidence used? NRA school security plan cites Hastings massacre that didn't happen » The Political Animal. NRA's School Security Plan Cites Phony Shooting. Is it a good idea to entrust the National Rifle Association with a role in shaping safety policies for schools? 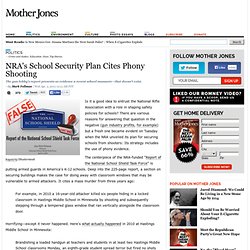 There are various reasons for answering that question in the negative (gun industry profits, for example) but a fresh one became evident on Tuesday when the NRA unveiled its plan for securing schools from shooters: Its strategy includes the use of phony evidence. The centerpiece of the NRA-funded "Report of the National School Shield Task Force" is putting armed guards in America's K-12 schools. Deep into the 225-page report, a section on securing buildings makes the case for doing away with classroom windows that may be vulnerable to armed attackers. It cites a mass murder from three years ago: For example, in 2010 a 16-year-old attacker killed six people hiding in a locked classroom in Hastings Middle School in Minnesota by shooting and subsequently stepping through a tempered glass window that ran vertically alongside the classroom door. 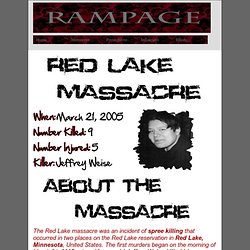 The first murders began on the morning of March 21, 2005, when 16-year-old Jeffrey Weise killed his grandfather and his grandfather's girlfriend. He later drove his grandfather's police vehicle to Red Lake Senior High School, where he shot and killed seven people on the school campus, injuring five students, one teacher and an unarmed security guard, and wounded five others. The shooting ended when Weise committed suicide. Weise eventually retreated to a vacant classroom in which Weise then committed suicide by a self-inflicted shotgun wound. Red Lake: A tragic tie to Sandy Hook. Ashley Lajeunesse hugged her 6-year-old daughter, Sierra, in the predawn darkness Wednesday and then offered a simple explanation to the tiny first-grader: Mom was joining three of her friends and former classmates, taking a long drive from their home near Red Lake, Minn., to Newtown, Conn. 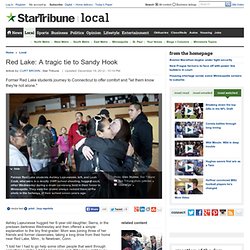 "I told her I had to go help some other people that went through something just like I did," Lajeunesse said. "She knew right away what I was talking about. Red Lake Grads Offer Support In Newtown, Conn. Get Breaking News First Receive News, Politics, and Entertainment Headlines Each Morning.

Sign Up. Survivors of 2005 Red Lake shooting pass plaque on to Newtown, Conn. View full size Clarice Applebee, left, hugs her mother Lorie next to a makeshift memorial outside of the Red Lake Senior High School in Red Lake, Minn., on March 25, 2005. 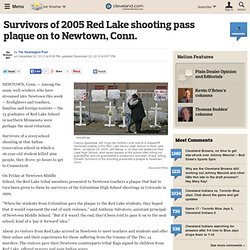 Jeff Weise, a 16-year-old student at Red Lake High School, shot seven people at the school after killing his grandfather and his grandfather's companion and then, finally, killing himself. Survivors of the shooting presented a plaque to Newtown, Conn. Associated Press NEWTOWN, Conn. -- Among the many well-wishers who have streamed into Newtown this week -- firefighters and teachers, families and foreign tourists -- the 13 graduates of Red Lake School in northern Minnesota were perhaps the most reluctant. Red Lake High School Shooting - Research Papers - Rodnio. Research Article: Sklaroff, S., Miron, M., Fields, H., & Marek, A. 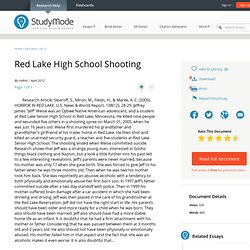 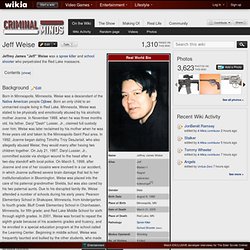 Background Edit. Jeffrey Weise. The Red Lake High School massacre was a school massacre that took place on Monday, March 21, 2005 in which Jeffrey Weise, a student at Red Lake High School in Red Lake, an unincorporated section of Beltrami County, Minnesota, killed seven people including a teacher and a security guard. Weise had previously killed his grandfather (a police officer) and his grandfather's girlfriend/partner at home before going to school to commit the massacre. Seven others were wounded.

When police cornered Weise inside the school, he shot and killed himself. Another student believed to be involved in planning the event was arrested one week after the shootings. He was charged with conspiracy to commit murder based on several email messages he exchanged with Jeff Weise which involved plans for the Red Lake High School massacre. The conspiracy charge was eventually dropped, though he pled guilty to transmitting threatening messages through the Internet. MPR: What happened at Red Lake? High School Shooting Spree Leaves 10 Dead. BEMIDJI, Minn. – A high school student went on a shooting rampage on an Indian reservation Monday, killing his grandparents at their home and then seven people at his school, grinning and waving as he fired, authorities and witnesses said.

The suspect apparently killed himself after exchanging gunfire with police. One student said her classmates pleaded with the gunman to stop shooting. "You could hear a girl saying, 'No, Jeff, quit, quit. Leave me alone. What are you doing? " Several news outlets identified the shooter as Jeff Weise, citing students and tribal leaders. Fourteen to 15 other students were injured, McCabe said. Hegstrom described the shooter grinning and waving at a student his gun was pointed at, then swiveling to shoot someone else. McCabe declined to talk about a possible connection between the suspect and the couple killed at the home, but Red Lake Fire Director Roman Stately said they were the grandparents of the gunman.