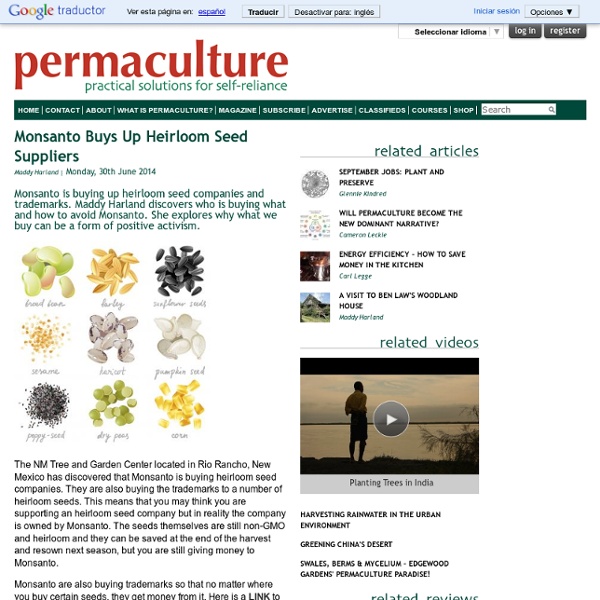 The NM Tree and Garden Center located in Rio Rancho, New Mexico has discovered that Monsanto is buying heirloom seed companies. They are also buying the trademarks to a number of heirloom seeds. This means that you may think you are supporting an heirloom seed company but in reality the company is owned by Monsanto. The seeds themselves are still non-GMO and heirloom and they can be saved at the end of the harvest and resown next season, but you are still giving money to Monsanto. Monsanto are also buying trademarks so that no matter where you buy certain seeds, they get money from it. Here is a LINK to the trademarks and seed companies Monsanto supply and ones that they do not supply in the USA. Here's some tips on how to avoid Monsanto. We need to all do our research when buying seeds (or any organically labelled product for that matter). In Europe we have witnessed a proactive corporate programme to buy up ethical/organic companies. Ethics in Action About The NM Tree and Garden Center

Related:  Gardening and Foraging • Seeds and Seedlings • Control • You may be in Danger

Growing Garlic, Harvesting Garlic, Planting Garlic, Garlic Scapes Garlic growing is easy in the home garden. Maintaining top quality requires care and attention. Weeding is important as garlic does not like competition. Watering and not watering, harvesting on time and curing properly are all important for producing bulbs with good keeping qualities. Soil Preparation Seed Starting Hacks Every Gardener Should Know! - Dory Fitz Seed starting hacks every gardener should know and every gardener can use. When it comes to growing a garden, watching a seed grow is just as satisfying as eating fresh produce from the mature plants. Start this years gardening adventure with some DIY seed starting tricks that are quick and easy. Plus, usually seed starting supplies are only found in stores during spring. With these DIY projects you don’t need to wait until then, anytime of year you have all of the supplies you need to start seeds.

HUD Wants to Outlaw Tiny Homes and RV Living - Return to Now The U.S. Department of Housing and Urban Development – which ironically was founded to end poverty and racial injustice in housing – proposed a law last month that would make living in a recreational vehicle – and potentially a tiny home – illegal. You can help prevent this proposal from becoming law by sending comments to regulations.gov by April 11!! While recreational vehicles are currently exempt from housing regulations, the proposed change would allow them to keep their exempt status only so long as no one is “living” in them. HUD complains in a summary of its proposed rule that some RVs “are being produced with patio roofs, screened in porches, and other extensions that exceed the 400 square-foot maximum” and “are being marketed as suitable for year-round living.”

The Tribune Sinclair Merger Will Be a Conservative Local News Empire Can Anyone Stop Trump’s FCC From [...] Rupert Murdoch, executive chairman of News Corp, on May 4, 2017 in New York. (Brendan Smialowski/AFP/Getty Images) President Trump’s Federal Communications Commission, under chairman Ajit Pai, has been clearing the way for a merger between Sinclair Broadcasting and Tribune Media, two television companies that together own hundreds of local news stations. Best Herbs for Teas (National Gardening Association) Once I began blending and testing herb teas to sell under my Garden Party label, I knew what I didn't want. An herb tea should never be flat and flavorless. Whether it's fruity or spicy, soothing or lively, simple or sophisticated, it needs taste and personality. I found my homegrown mint, lemon balm and chamomile were more flavorful than the herbal ingredients I could buy. I also learned that many of the old-fashioned beverage flavorers, such as rose petals and toasted sunflower hulls, are still delightful additions. And for simple pleasures, few things equal the fragrance and flavor of a few fresh leaves of lemon verbena steeped in boiling water.

10 Best Companies for Non-GMO Heirloom Seeds Steer clear of Monsanto’s GMO seeds and support companies doing the most good for the planet If you buy seeds that aren’t organic, open pollinated or heirlooms, you are most likely buying from a company owned Monsanto called Seminis. Seminis has been buying up patents on most nursery seed varieties like Early Girl and Better Boy tomatoes.

Spin: Footage You Were Never Supposed to See (1995) Artist Brian Springer spent a year scouring the airwaves with a satellite dish grabbing back channel news feeds not intended for public consumption. The result of his research is SPIN, one of the most insightful films ever made about the mechanics of how television is used as a tool of social control to distort and limit the American public's perception of reality. Take the time to watch it from beginning to end and you'll never look at TV reporting the same again.

Water scarcity could affect 5 billion people by 2050 A new report claims that half of the world’s population may struggle to quench its thirst in the coming decades. The news: UNESCO’s new World Water Development Report says that 3.6 billion people currently live in places that can suffer from water scarcity for at least one month of the year. It projects that the figure will rise to five billion—half of the world’s predicted 10 billion population—by 2050. perennial-farming-systems-organic-agriculture-edible-permaculture-eric-toensmeier-large-scale-farmland To save the planet we may need to turn it into an edible paradise… help me write the book that explains how and why. Check out my successfully funded kickstarter campaign to learn about this hopeful solution to climate change and how you helped make my book, The Carbon Farming Solution happen. Also please consider joining my mailing list. The following article appeared in the Fall 2011 and Winter 2012 issues of the Permaculture Activist.

The Manual of Seed Saving: Harvesting, Storing, and Sowing Techniques for Vegetables, Herbs, and Fruits from Timber Press Growing vegetables, fruits, and herbs from seed has many benefits for both the gardener and the planet. Seed saving helps gardeners maintain important regional varieties that are well suited for specific conditions, encourages plant diversity, and helps promote plants with the best texture, flavor, and variety. The Manual of Seed Saving is an authoritative guide from experts around the globe. Supported by research from the global conservation organizations Arche Noah and Pro Specie Rara, it features information on how to maximize seed quality and yield for more than 100 crop plants. It includes popular market plants like asparagus, carrots, corn, rhubarb, spinach, squash, and tomatoes. Plant profiles include critical information on pollination, isolation distances, cultivation, harvest, storage, and pests and diseases.