Chopper Down: Helicopter Deaths in the Movies. Twilight Zone: The Movie (1983) Part 2. Twilight Zone Director John Landis Faces a Manslaughter Rap Over a Stunt That Went Tragically Wrong. For a director whose films offer a manically comic view of the world, John Landis was conservatively dressed—in a dark blue suit—and uncharacteristically silent. In a Los Angeles courtroom three weeks ago, he listened intently to a grand jury indictment accusing him and four associates of involuntary manslaughter—of causing the deaths of actor Vic Morrow and two children, who were decapitated last July when a camera helicopter on the set of the movie Twilight Zone scythed down on them.

Landis pleaded not guilty, stating that "the accident was an overwhelming tragedy for many people. It had a profound impact on our lives. I know in my head and I know in my heart that we did not cause the accident. " Nonetheless, the strain was apparent, and Landis has ample cause for concern. Money talks, and no hot property walks in Hollywood. Still, Landis is now stigmatized as the first director to be indicted for an on-set fatality.

Twilight Zone: the Trial. "What you will see is no illusion," Deputy District Attorney Lea Purwin D'Agostino told jurors in a packed Los Angeles courtroom. 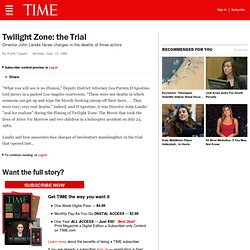 "These were not deaths in which someone can get up and wipe the bloody-looking catsup off their faces . . . They were very, very real deaths. " Dick Peabody writes about Vic Morrow's death. In Harm's Way: by Dick Peabody From the Mountain Democrat--Placerville, California Thursday, May 23, 1991 (reprinted with permission from Dick Peabody) In 1971, I hosted a talk show from Universal Studios in Los Angeles over KFI (NBC radio). I had little to do with selecting the guests. Twenty-five percent of them were chosen by Universal's publicity department and 75 percent were booked by a public relations firm the station had retained for this purpose. Occasionally, I would suggest someone and arrangements would be handled by either Universal or the PR company. Knowing how reluctant he was to do interviews, I had to cajole him into it.

During the interview, Vic made what turned out to be a poignant point. Thanks to A.D. and his team, all of the actors felt secure, despite potentially dangerous explosions going on around us. Ten years later, Vic was dead because he worked on a movie in which key personnel were either drunk or stoned on coke, or both. John Landis commentary: Vic Morrow Died Edition. Portrait of an artist nonplussed by memories of mutilated Asians I recently finished Outrageous Conduct, the story of director John Landis on trial for the accidental deaths of actor Vic Morrow and two Vietnamese children on the set of The Twilight Zone: The Movie.

Here is a thorough, free and lengthy online piece detailing the incident. Essentially, the prosecution got too cocky and made Landis & Co. look like sympathetic figures. The really damning evidence is the fact that Landis allowed the filming to happen without telling the parents that their kids would be around helicopters, AND that they shot in Florida to get around tougher safety restrictions in Cali. Coupled with testimony that Landis and the other producers were actually joking about the illegality of their actions, this should've been an open-and-shut manslaughter case. Aint No Way to Go: The Twilight Zone. SHORTLY AFTER 2:00 on the morning of July 23, 1982, actor Vic Morrow paced nervously in front of a mock Vietnamese village that had been erected in the Indian Dunes park just north of Los Angeles. After three straight weeks of night shooting, the entire company was feeling worn down.

Now it was almost over. The last scene to be shot that night was also the very last scene in John Landis' episode of Twilight Zone — The Movie. It would show the destruction of the Vietnamese village in a series of enormous explosions. Special Effects: Disaster at Twilight Zone : The Tragedy and the Trial (9780684189437): Ron Labrecque.