Why you should be more concerned about internet shutdowns. US Patent 6506148 B2 Confirms Human Nervous System Manipulation Through Your Computer & TV. The Purpose of the Federal Reserve Banking System Is Quite Clear. The Facts:Centralized banking has been devised for a purpose unseen and much different than what the public and most of our elected leaders/legislators believe. 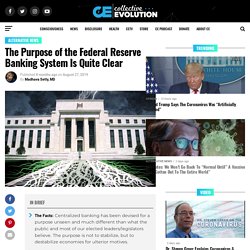 The purpose is not to stabilize, but to destabilize economies for ulterior motives.Reflect On:How does a system described in the article benefit the people at all? What is really going on here and how did we get into this mess? What alternatives and solutions would you think of? Do Probability and Statistics interest you? Perhaps not. Some basics … Document Surfaces Showing CIA’s Plans To Infiltrate Academia & Change University/College Curriculums. There’s no doubt about it: three letter agencies like the NSA, FBI and CIA and the ones we don’t yet know about are full of great people who want nothing but the best for their fellow human beings. 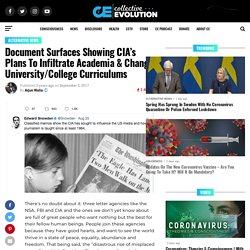 People join these agencies because they have good hearts, and want to see the world thrive in a state of peace, equality, abundance and freedom. That being said, the “disastrous rise of misplaced power” to which President Eisenhower referred when referencing the military industrial complex, has taken a hold of these agencies, which now comprise what’s known as the Deep State. The Deep State is a covert network of powerful and influential people who continue to manipulate, lie, and deceive the public for their own interests. Oh, by the way, it’s safe to assume that the Deep State also includes, as mentioned above, the agencies we don’t yet know about. Several presidents and politicians have also referenced this secret government, which doesn’t seem to be so secret anymore. Incredible Animation Summarises Noam Chomsky's 5 Filters of the Mass Media Machine. 30 Year NSA Employee Shares Why They Are Watching You & It Has Nothing To Do With Terrorism. 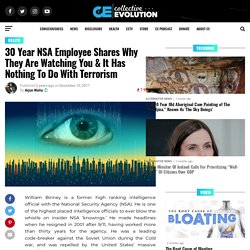 Antibacterial Soap & Hand Sanitizer Many people are under the impression that using antibacterial soap will prevent them from getting sick. Yes, these products do kill bacteria and other germs, but they have no effect at all on viruses, which is what causes people to get sick in the first place. A systematic review published in 2007 in the Journal of Clinical Infectious Diseases determined that antibacterial soap containing triclosan did not provide any additional benefit over regular non-antibacterial soap.(1) This is interesting because the chemical triclosan actually has been shown to have a number of adverse health effects, including antibiotic resistance and endocrine disruption. How India, the World's Largest Democracy, Shuts Down the Internet. Update 27 January 2020: News reports state that India's government has restored Internet access to the Kashmir region, though residents there can currently only browse 301 websites approved by the government and still cannot use social media. 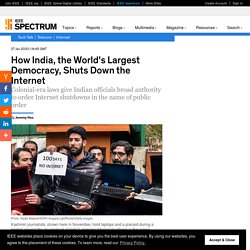 Mobile Internet is only available at very low speeds, according to a report from The Wire. When government officials in India decided to shut down the Internet, software engineers working for an IT and data analytics firm lost half a day of work and fell behind in delivering a project for clients based in London. Cybersecurity to Guard Against Brain Hacking. Data generated by your internet browser, by your geographical location, by filling out online forms or by typing on your keyboard can reveal very private information, such as your sexual orientation or your political ideology. 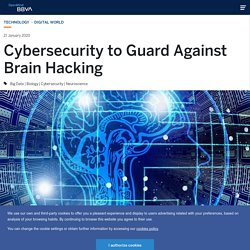 Imagine what information may be gleaned with access to your thoughts. The development of brain-machine interfaces forces us to consider this issue, as these devices are capable of connecting computers directly to the brain. Science and neurotechnology haven’t come far enough to enable mind-reading, but already there are consumer-grade devices which can register delicate neural signals. Electroencephalography (EEG) headsets, for instance, are used in marketing studies to analyse emotions and unconscious reactions to certain products or events. China is using DNA samples to try to recreate the faces of Uighurs. The news: Chinese researchers are trying to work out how to use a DNA sample to recreate an image of a person’s face using blood taken from Uighurs, according to an investigation by the New York Times. 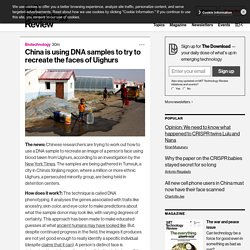 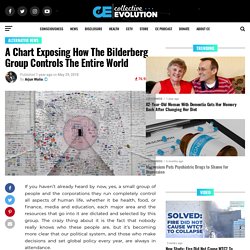 Author and journalist Kevin Annett has done the same presenting some disturbing evidence.Reflect On:How has the sexual abuse of children been allowed to carry on in places of high power in influence for so long? Who is exactly involved? Does this go all the way to the top? If you don’t already know, a number of Vatican officials over the years have been implicated in sexually abusing children. In fact, it goes well beyond the main church inside the walls of Vatican city, and into various churches around the world that are connected to the Roman Catholic Order, among others. (3) YouTube Just Demonetized 75% Of Our Videos. Oil And Gas Giants Spend Millions Lobbying To Block Climate Change Policies [Infographic] China Uses DNA to Track Its People, With the Help of American Expertise. Gardeners, Homesteaders, Preppers and Survivalists. 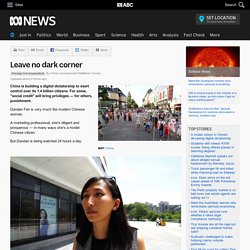 Today, Europe Lost The Internet. Now, We Fight Back. Today, in a vote that split almost every major EU party, Members of the European Parliament adopted every terrible proposal in the new Copyright Directive and rejected every good one, setting the stage for mass, automated surveillance and arbitrary censorship of the internet: text messages like tweets and Facebook updates; photos; videos; audio; software code -- any and all media that can be copyrighted. 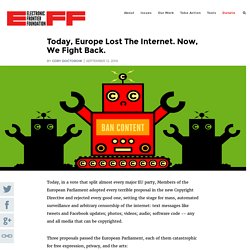 Three proposals passed the European Parliament, each of them catastrophic for free expression, privacy, and the arts: 1. Article 13: the Copyright Filters. Tiny Homes Banned in US at Increasing Rate as Government Criminalizes Off Grid Living. Sunny Nevada Just Killed the Solar Industry with 40% Tax Hike, Derailing the Off-Grid Movement. While Nevadans were celebrating the holidays under solar-powered lights, the Nevada Public Utilities Commission (PUC) voted unanimously to increase a monthly fee on solar customers by 40% while reducing the amount they get paid for excess power sold to the grid. 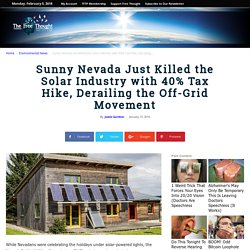 Adding insult to injury, they made the rate changes retroactive, sabotaging consumer investments in solar energy. This single move by government regulators will effectively kill the solar industry in Nevada and put an end to the surge of people seeking to detach from the grid by harnessing their own energy from the sun. Self-Sustainable Lifestyles are Becoming Illegal. Across the U.S. local zoning officials are making it increasingly difficult for people to go off-grid and live self-sustainable lives. Building tiny homes, harvesting rainwater, using solar or wind energy, and even building community gardens are being targeted and in some cases, the people involved are even threatened with jail time and fines.

Tiny Homes. Woman’s Personal “Survival Garden” Destroyed By Authorities. After becoming unemployed, Tulsa resident Denise Morrison’s garden was destroyed by the authorities for not ‘complying’ with their guidelines. With little money to live off, Denise had the bright idea to grow a garden rich in not just fruits and vegetables, but to grow natural medicines and herbs to help treat her various illnesses. She cultivated fruit trees, nuts and seeds, and different types of berries to supplement a healthy diet, she also had various herbs to treat her diabetes, high blood pressure and arthritis. Om två år ser storebror allt. Coalition could allow firms to buy access to facial recognition data. The federal government is considering allowing private companies to use its national facial recognition database for a fee, documents released under Freedom of Information laws reveal.

The partially redacted documents show that the Attorney General’s Department is in discussions with major telecommunications companies about pilot programs for private sector use of the Facial Verification Service in 2018. The documents also indicate strong interest from financial institutions in using the database. The government has argued that the use of facial recognition is necessary for national security and to cut down on crimes such as identity fraud. The Attorney General’s Department says private companies could only use the service with the person’s consent.

Trump Knows You Better Than You Know Yourself. How statistics lost their power – and why we should fear what comes next. The One Video That Can Change The World. This is a short documentary film made by Spencer Cathcart questioning our freedom, the education system, corporations, money, the American capitalist system, the US government, world collapse, the environment, climate change, genetically modified food, and our treatment of animals. The UN Plans To Implant Everyone With A Biometric ID - ORGANIC AND HEALTHY. Century of Self. Man Gets Prison Sentence For Collecting Rainwater On His Property. The New Mind Manipulators. Spin: Footage You Were Never Supposed to See (1995) HUD Wants to Outlaw Tiny Homes and RV Living - Return to Now. The U.S. Occult Battery Definition: How Humans are Used as Batteries. Collecting Rainwater Now Illegal in Many States as Big Government Claims Ownership Over Our Water.