In marin and sonoma county, where I learned how to forage.

Malva. Malva is a genus of about 25–30 species of herbaceous annual, biennial, and perennial plants in the family Malvaceae (of which it is the type genus), one of several closely related genera in the family to bear the common English name mallow. 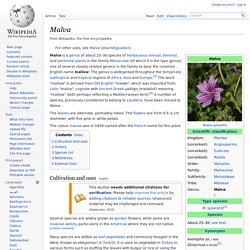 The genus is widespread throughout the temperate, subtropical and tropical regions of Africa, Asia and Europe.[3] The word "mallow" is derived from Old English "malwe", which was imported from Latin "malva", cognate with Ancient Greek μαλάχη (malakhē) meaning "mallow", both perhaps reflecting a Mediterranean term.[4] A number of species, previously considered to belong to Lavatera, have been moved to Malva. The leaves are alternate, palmately lobed. The flowers are from 0.5–5 cm diameter, with five pink or white petals. The colour mauve was in 1859 named after the French name for this plant. Juniperus virginiana. Juniperus virginiana — its common names include red cedar, eastern red-cedar,[2] eastern redcedar, eastern juniper, red juniper, pencil cedar, and aromatic cedar — is a species of juniper native to eastern North America from southeastern Canada to the Gulf of Mexico and east of the Great Plains.[3] Further west it is replaced by the related Juniperus scopulorum (Rocky Mountain Juniper) and to the southwest by Juniperus ashei (Ashe Juniper).[4][5][6] In the Lakota language, its name is Chansha, "redwood" or Hante'. 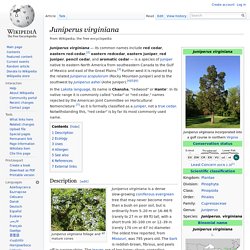 In its native range it is commonly called "cedar" or "red cedar," names rejected by the American Joint Committee on Horticultural Nomenclature [7] as it is formally classified as a juniper, not a true cedar. Notwithstanding this, "red cedar" is by far its most commonly used name. Description[edit] Avena fatua. Avena fatua is a species of grass in the oat genus. 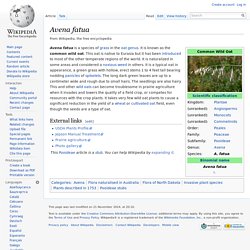 It is known as the common wild oat. This oat is native to Eurasia but it has been introduced to most of the other temperate regions of the world. Weed Gallery: Wild oat. Click on images to enlarge Wild oat is an erect, cool season annual grass with open-branched, nodding flower clusters. 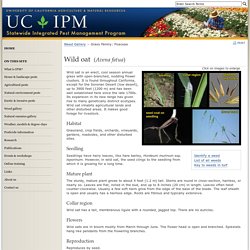 It is found throughout California, except for the Sonoran Desert (low desert), up to 3900 feet (1200 m) and has been well established here since the late 1700s. Its expansion in its new range has given rise to many genetically distinct ecotypes. Preparedness Advice Blog. Learn about the plants in your area. 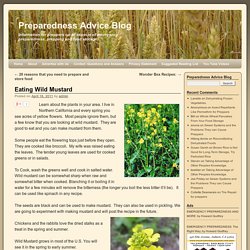 I live in Northern California and every spring you see acres of yellow flowers. Most people ignore them, but a few know that you are looking at wild mustard. They are good to eat and you can make mustard from them. Some people eat the flowering tops just before they open. They are cooked like broccoli. To Cook, wash the greens well and cook in salted water. Raphanus raphanistrum. Raphanus raphanistrum, wild radish or jointed charlock, is a flowering plant in the family Brassicaceae. 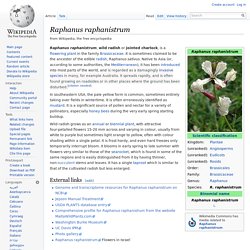 It is sometimes claimed to be the ancestor of the edible radish, Raphanus sativus. Rumex crispus. Rumex crispus (curly dock, curled dock or yellow dock) is a perennial flowering plant in the family Polygonaceae, native to Europe and Western Asia.[1] Description[edit] The plant produces an inflorescence or flower stalk that grows to about 1 m high. 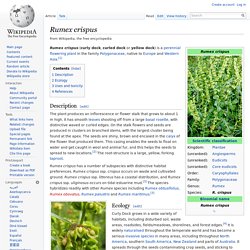 Sambucus. The genus occurs in temperate to subtropical regions of the world. 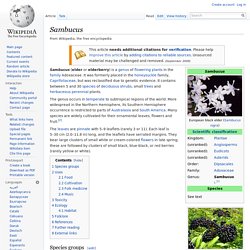 More widespread in the Northern Hemisphere, its Southern Hemisphere occurrence is restricted to parts of Australasia and South America. Many species are widely cultivated for their ornamental leaves, flowers and fruit.[2] The leaves are pinnate with 5–9 leaflets (rarely 3 or 11). Each leaf is 5–30 cm (2.0–11.8 in) long, and the leaflets have serrated margins. Mugwort. 19th century illustration of Artemisia vulgaris Mugworts are used medicinally, especially in Chinese, Japanese, and Korean traditional medicine. 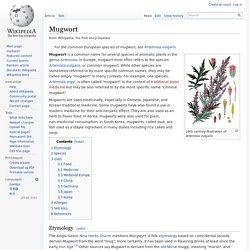 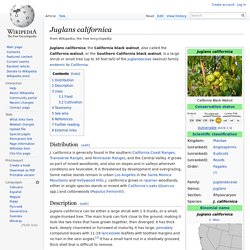 Distribution[edit] J. californica is generally found in the southern California Coast Ranges, Transverse Ranges, and Peninsular Ranges, and the Central Valley. Juglans nigra. While its primary native region is the Midwest and east-central United States, the black walnut was introduced into Europe in 1629. It is cultivated there and in North America as a forest tree for its high-quality wood.

Black walnut is more resistant to frost than the English or Persian walnut, but thrives best in the warmer regions of fertile, lowland soils with high water tables. Black walnut is primarily a pioneer species similar to red and silver maple and black cherry. It will grow in closed forests, but needs full sun for optimal growth and nut production. Corylus cornuta. Corylus cornuta (Beaked Hazel) is a deciduous shrubby hazel found in most of North America, from southern Canada south to Georgia and California.

It grows in dry woodlands and forest edges and can reach 4–8 metres (13–26 ft) tall with stems 10–25 centimetres (3.9–9.8 in) thick with smooth gray bark. The leaves are rounded oval, coarsely double-toothed, 5–11 centimetres (2.0–4.3 in) long and 3–8 centimetres (1.2–3.1 in) broad, with hairy undersides. The flowers are catkins that form in the fall and pollinate in the following spring. Rubus parviflorus. Rubus parviflorus, commonly called thimbleberry,[1] is a species of Rubus, native to western and northern North America, and the Great Lakes region.[2] Distribution[edit] The plant is found from Alaska east to British Columbia, Ontario and Michigan; and south to California, Baja California, and New Mexico,[2] and further south into Northwestern Mexico.

It climbs on other plants or covers the ground with twisted, woody ropes of vine covered in green leaves. In the fall the leaves turn many shades of orange and yellow. Bunches of small and often sour but edible purple grapes hang from the vines in autumn. California Wild Grape - Sonoma County Master Gardeners. By Sonoma County Master Gardener Anne Brewer Fall has settled in, and brilliant colors abound to prove it! Deciduous trees are showing off glorious hues of yellow, orange, red and purple. Plantago. Plantains are used as food plants by the larvae of some species of Lepidoptera (butterfly and moth) - see list of Lepidoptera that feed on plantains. Manzanita. Main article: Arctostaphylos Manzanita branches with red bark. Edible seaweed. Edible seaweed are algae that can be eaten and used in the preparation of food.

It typically contains high amounts of fiber and they contain a complete protein.[1] They may belong to one of several groups of multicellular algae: the red algae, green algae, and brown algae. Apple. The apple tree (Malus domestica) is a deciduous tree in the rose family best known for its sweet, pomaceous fruit, the apple.

It is cultivated worldwide as a fruit tree, and is the most widely grown species in the genus Malus. Fragaria californica, Wood Strawberry. Claytonia perfoliata. Rosa californica. Description[edit] Fiddlehead fern. A chicken dish including fiddleheads Fiddleheads or fiddlehead greens are the furled fronds of a young fern,[1] harvested for use as a vegetable. Left on the plant, each fiddlehead would unroll into a new frond (circinate vernation). As fiddleheads are harvested early in the season before the frond has opened and reached its full height, they are cut fairly close to the ground.

Typha. Typha /ˈtaɪfə/ is a genus of about 30 species of monocotyledonous flowering plants in the family Typhaceae. The genus has a largely Northern Hemisphere distribution, but is essentially cosmopolitan, being found in a variety of wetland habitats. These plants have many common names. Huckleberry. Taraxacum. Description[edit] The species of Taraxacum are tap-rooted biennial or perennial herbaceous plants, native to temperate areas of the globe. Urtica dioica. Umbellularia. Malus. Salvia officinalis. Blackberry. Artemisia californica. Acorn. Tropaeolum. Lavandula. File:Oxalis-pes-caprae0021c.jpg.