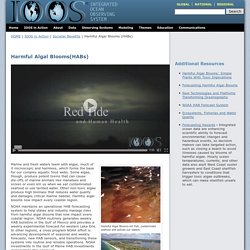 The deep color some of the blooms produce is the reason these events are also known as “red tides”. Marine and fresh waters teem with algae, much of it microscopic and harmless, which forms the base for our complex aquatic food webs. Some algae, though, produce potent toxins that can cause die-offs of marine animals like manatees and sicken or even kill us when we eat contaminated seafood or use tainted water. Other non-toxic algae produce high biomass that reduces water quality and damages critical marine habitat. NOAA maintains an operational HAB forecasting system to help states and industry manage risks from harmful algal blooms that now impact every coastal region. Real-time environmental data from IOOS has also proven critical for assessing HAB threats. (top)

Hypoxia in the Northern Gulf of Mexico. Peak Phosphorous: Worse than Peak Oil? - THE DAILY IMPACT. Whether in a farm pond like this, or the Gulf of Mexico, algae blooms stimulated by wasted fertilizer are deadly to marine life. 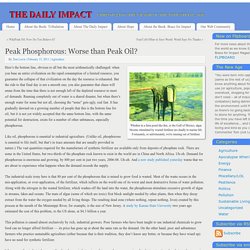 Fortunately, or unfortunately, we're running out of fertilizer. Here’s the bottom line, obvious to all but the most arithmetically challenged: when you base an entire civilization on the rapid consumption of a limited resource, you guarantee the collapse of that civilization on the day the resource is exhausted. But the ride to that final day is not a smooth one; you also guarantee that chaos will ensue from the time that there is not enough left of the depleted resource to meet all demands. Running completely out of water is a shared disaster, but when there’s enough water for some but not all, choosing the “some” gets ugly, real fast.

Like oil, phosphorous is essential to industrial agriculture. The industrial-scale irony here is that 80 per cent of the phosphorous that is mined to grow food is wasted. Dead Zone in the Gulf of Mexico - Green Living Guide by Dr Prem. Environmental Degradation. Water as a Human Resource Freshwater makes up about 3% of all water on earth. 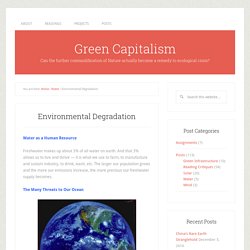 And that 3% allows us to live and thrive — it is what we use to farm, to manufacture and sustain industry, to drink, wash, etc. The larger our population grows and the more our emissions increase, the more precious our freshwater supply becomes. Smaller ‘dead zone’ recorded in Gulf. RemainsDead pogies (a type of fish) float on the Louisiana coast, during a time of year when dead zones form in the Gulf of Mexico, but local officials believe the Deepwater Horizon oil spill may be a factor.Photo: AP. 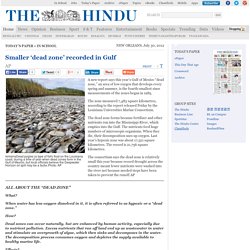 USGS - The Gulf of Mexico Hypoxic Zone. Biggest dead zone ever coming to the Gulf of Mexico. Farmland runoff containing fertilizers and livestock waste, some of it from as far away as the Corn Belt, is the main source of the nitrogen and phosphorus that cause the annual Gulf of Mexico “dead zone.” 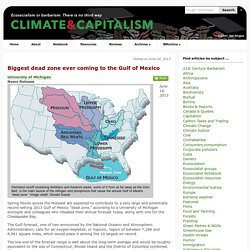 Image credit: Donald Scavia University of Michigan News ReleaseJune 18, 2013 Spring floods across the Midwest are expected to contribute to a very large and potentially record-setting 2013 Gulf of Mexico “dead zone,” according to a University of Michigan ecologist and colleagues who released their annual forecast today, along with one for the Chesapeake Bay. The Gulf forecast, one of two announced by the National Oceanic and Atmospheric Administration, calls for an oxygen-depleted, or hypoxic, region of between 7,286 and 8,561 square miles, which would place it among the 10 largest on record. Researchers predict average Gulf of Mexico 'dead zone,' slightly above-average in Chesapeake Bay.

(Phys.org) —A University of Michigan researcher and his colleagues are forecasting an average but still large "dead zone" in the Gulf of Mexico this year and a slightly above-average oxygen-starved region in the Chesapeake Bay. 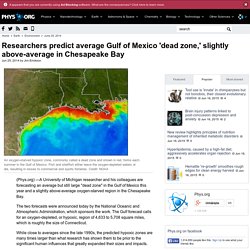 The two forecasts were announced today by the National Oceanic and Atmospheric Administration, which sponsors the work. The Gulf forecast calls for an oxygen-depleted, or hypoxic, region of 4,633 to 5,708 square miles, which is roughly the size of Connecticut. While close to averages since the late 1990s, the predicted hypoxic zones are many times larger than what research has shown them to be prior to the significant human influences that greatly expanded their sizes and impacts.

"These annual forecasts serve two purposes. "The second is to demonstrate through more than a decade of reasonably accurate annual forecasts that these models form a solid basis for setting nutrient load reduction targets. " NOAA, partners predict an average 'dead zone' for Gulf of Mexico. Scientists are expecting that this year's Gulf of Mexico hypoxic zone, also called the "dead zone," will be approximately 5,483 square miles or about the size of Connecticut-the same as it has averaged over the last several years. 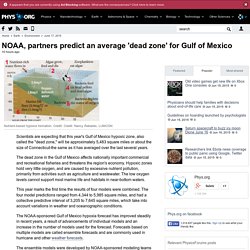 The dead zone in the Gulf of Mexico affects nationally important commercial and recreational fisheries and threatens the region's economy. Hypoxic zones hold very little oxygen, and are caused by excessive nutrient pollution, primarily from activities such as agriculture and wastewater. The low oxygen levels cannot support most marine life and habitats in near-bottom waters. This year marks the first time the results of four models were combined. The four model predictions ranged from 4,344 to 5,985 square miles, and had a collective predictive interval of 3,205 to 7,645 square miles, which take into account variations in weather and oceanographic conditions.

What Causes Ocean "Dead Zones"? Dear EarthTalk: What is a “dead zone” in an ocean or other body of water? 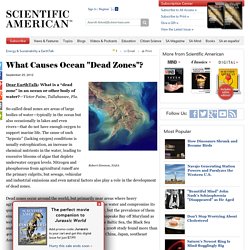 —Victor Paine, Tallahassee, Fla. So-called dead zones are areas of large bodies of water—typically in the ocean but also occasionally in lakes and even rivers—that do not have enough oxygen to support marine life. The cause of such “hypoxic” (lacking oxygen) conditions is usually eutrophication, an increase in chemical nutrients in the water, leading to excessive blooms of algae that deplete underwater oxygen levels. The Dead Zone. EPA Science Matters August/September 2012: Into the Dead Zone. EPA researchers are creating a state-of-the-art three-dimensional model of the Gulf of Mexico's dead zone. 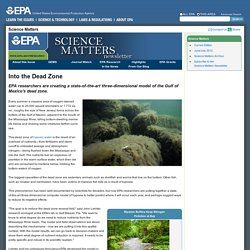 Every summer a massive area of oxygen-starved water (up to 20,000 square kilometers or 7,772 sq. mi., roughly the size of New Jersey) forms across the bottom of the Gulf of Mexico, adjacent to the mouth of the Mississippi River, killing bottom-dwelling marine life below and chasing some creatures farther out to sea. This dead zone of hypoxic water is the result of an overload of nutrients—from fertilizers and storm runoff to untreated sewage and atmospheric nitrogen—being flushed down the Mississippi and into the Gulf. The nutrients fuel an explosion of plankton in the warm surface water, which then die and are consumed by bacteria below, robbing the bottom waters of oxygen.

The biggest casualties of the dead zone are sedentary animals such as shellfish and worms that live on the bottom. Riparian Buffers Keep Nitrogen Pollution at Bay Learn More: EPA's Wetland Management Research. File:Dead Zone NASA NOAA.jpg. » BIGGER Dead Zones Predicted for the Gulf of Mexico Forward Now! June 19, 2013 11:11 am Creating the Dead Zone Coming this summer: “The Dead Zone” in the Gulf of Mexico unless a tropical storm hits the area shortly before or during the annual measurement. 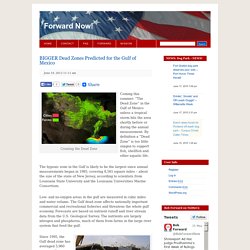 By definition a “Dead Zone” is too little oxygen to support fish, shellfish and other aquatic life. Mississippi Dead Zone. Ocean Dead Zones Are Getting Worse Globally Due to Climate Change. Nearly all ocean dead zones will increase by the end of the century because of climate change, according to a new Smithsonian-led study. But the work also recommends how to limit risks to coastal communities of fish, crabs and other species no matter how much the water warms. Dead zones are regions where the water has unusually low dissolved oxygen content, and aquatic animals that wander in quickly die. These regions can form naturally, but human activities can spark their formation or make them worse. For instance, dead zones often occur when runoff from farms and cities drains into an ocean or lake and loads up the water with excess nutrients such as nitrogen and phosphorus. Those nutrients feed a bloom of algae, and when those organisms die, they sink through the water column and decompose.