The Gervais Principle, Or The Office According to “The Office” 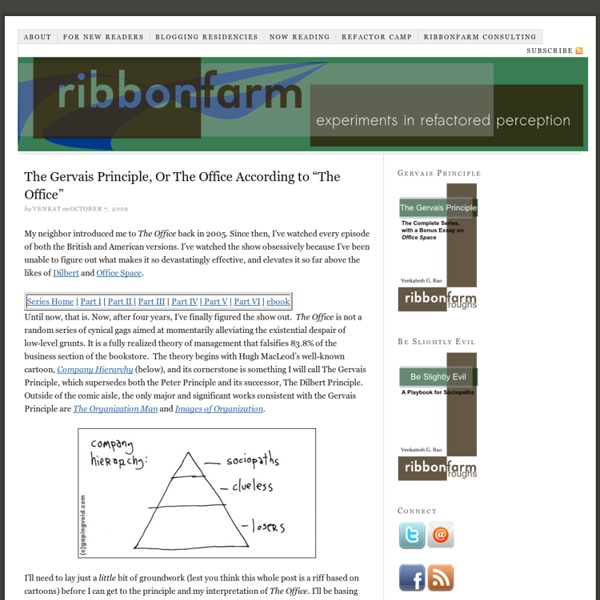 My neighbor introduced me to The Office back in 2005. Since then, I’ve watched every episode of both the British and American versions. I’ve watched the show obsessively because I’ve been unable to figure out what makes it so devastatingly effective, and elevates it so far above the likes of Dilbert and Office Space. Until now, that is. Now, after four years, I’ve finally figured the show out. The Office is not a random series of cynical gags aimed at momentarily alleviating the existential despair of low-level grunts. I’ll need to lay just a little bit of groundwork (lest you think this whole post is a riff based on cartoons) before I can get to the principle and my interpretation of The Office. From The Whyte School to The Gervais Principle Hugh MacLeod’s cartoon is a pitch-perfect symbol of an unorthodox school of management based on the axiom that organizations don’t suffer pathologies; they are intrinsically pathological constructs. Back then, Whyte was extremely pessimistic.

Eddard Stark’s Ethics of Honor ~by Kyle Cupp “Have you no shred of honor?” Ned Stark asks this question to the ever-plotting Lord Petyr Baelish toward the end of A Game of Thrones. The question exposes the Lord of Winterfell’s two biggest failings: 1) he fails time and again to realize that those around him (deceitful schemers he inexplicably trusts) have less care for honor than the Wall has warmth, and 2) his guiding ethical philosophy, so to speak, is as morally insufficient as it is simplistic. No one can say that Eddard Stark isn’t principled and doesn’t endeavor (most of the time) to stay true to his principles. King Robert lies wounded, near death, and has entrusted the kingdom to Ned, having named him Protector of the Realm. “So it would seem,” Baelish says to Ned’s assessment of the situation, “unless…” Baelish concedes the right, but suggests that Ned take the power himself, make peace with the Lannisters, and arrange a few marriages that will further unite the kingdom. For Ned, the matter is simple.

Why the 'The Hunger Games's Snub of 'Battle Royale' Matters Hollywood's next likely blockbuster, The Hunger Games, is set to open this Friday, March 23. This work is unique from past remakes or adaptations of Asian stories in that its creator denies any knowledge of the classic Japanese book (1999) and movie Battle Royale (2000), with which it shares extraordinary parallels. Both movies feature a corrupt totalitarian government that places children on an isolated island to fight brutally to the death using weapons packs, until one last winner emerges. They implant tracking devices into the children and fill the island with cameras, which are observed by a control room that airs the competition to the general population. A female protagonist ultimately triumphs with the help of a boy with whom she develops a relationship. This isn't the first time Hollywood has made minor modifications on an Asian story and marketed it as a novel piece of art. Casting the right actors is imperative when adapting a novel for the big screen ... ‘Hunger Games’ Vs.

Firefly's 15 Best Chinese Curses (and How to Say Them) ​In just 14 episodes, Joss Whedon's sci-fi masterpiece Firefly managed to build one of the most devoted fanbases in all of nerd-dom. Properties like Star Trek or Doctor Who may have it beat in sheer numbers, but the Browncoats make up for this with their loyalty and tenacity. What is the secret of the show's appeal? Fans can and will explain the show's engrossing plotlines, fascinating characters, brilliant performances, realistic effects, and a unique visual aesthetic -- but if we had to choose one reason, it'd be the dialogue. Whedon created a vision of a human future where mankind speaks English primarily, with Mandarin Chinese added, as one might say, for "flavor" (i.e., profanity). 15) Stupid Inbred Stack of Meat 笨天生的一堆肉。 14) Cow Sucking 吸牛 ・ Shee-niou While helping Simon and River first infiltrate, then escape from, a hospital on the affluent Alliance core world of Ariel, Jayne relieves a security officer of his sidearm: a non-lethal sonic rifle. More links from around the web!

The Man Behind The Curtain | | The WeeklingsThe Weeklings CHARLES WING KRAFFT, the self-taught painter turned postmodern ceramicist, is famous for his ‘Disasterware’ collection, a term he coined for the melding of violent, often Fascist imagery with tawdry vessels. He’s fashioned everything from ceramic grenades with bio-weapons decaled in antiquated blue to perfume bottles appliquéd with swastikas. Krafft’s work has been featured in prominent news outlets such as Harpers and The New Yorker and is on permanent display at the Seattle Art Museum. He’s received endowments from the Soros Foundation and the NEA. Enthusiasts celebrate, or at least used to celebrate, what they believed to be Krafft’s insidious sense of irony that took a darkly comedic take on twentieth-century disasters, not to mention a vicious stand against political iconography in all forms. It wasn’t until recently, however, that Krafft’s ugly allegiances bubbled to the surface, mostly discovered via Facebook rants, podcasts, and interviews with some of his close friends.

The postmortem portraits of Phineas Gage A new artform has emerged – the post-mortem neuroportrait. Its finest subject, Phineas Gage. Gage was a worker extending the tracks of the great railways until he suffered the most spectacular injury. As he was setting a gunpowder charge in a rock with a large tamping iron, the powder was lit by an accidental spark. He became famous in neuroscience because he lived – rare for the time – and had psychological changes as a result of his neurological damage. His story has been better told elsewhere but the interest has not died – studies on Gage’s injury have continued to the present day. There is a scientific veneer, of course, but it’s clear that the fascination with the freak Phineas has its own morbid undercurrents. The image is key. The first such picture was constructed with nothing more than pen and ink. This Gage is forever fleshless, the iron stuck mid-flight, the shattered skull frozen as it fragments. Harlow’s sketch is the original and the originator. He has gentle flesh.

Drawing on Pigs: Wim Delvoye's Art Farm | viz. (Image Credit: Wim Delvoye ) It's pretty easy to understand (and probably join in) the outrage surrounding Wim Delvoye's work with pigs. Tattoos aren't exactly taboo in any real fashion anymore, but even as commonplace as they've become they still seem to provoke discussions about the use of bodies as writing platforms. In casual conversation clothes don't have nearly the same effect; though, it could be argued that they write on the body just as much as any tattoo. Clothes, though, seem to be commonly taken up as transient while tattoos are (mostly) permanent. Of course, dressing a pig everyday would surely, almost undeniably, have a more noticeable impact on a pig's life. "To tattoo a pig, we sedate it, shave it and apply Vaseline to its skin" (Delvoye in a 2007 interview in ArtAsiaPacific found at Sperone Westwater ). Wim Delvoye worked his way up to live pigs. Delvoye is a vegetarian, but he both consumes and offers these pigs up for consumption as art.

The Matrix, or Two Sides of Perversion When I saw The Matrix at a local theatre in Slovenia, I had the unique opportunity of sitting close to the ideal spectator of the film - namely, to an idiot. A man in the late 20ies at my right was so immersed in the film that he all the time disturbed other spectators with loud exclamations, like "My God, wow, so there is no reality!"… I definitely prefer such naive immersion to the pseudo-sophisticated intellectualist readings which project into the film the refined philosophical or psychoanalytic conceptual distinctions.(1) It is nonetheless easy to understand this intellectual attraction of The Matrix: is it not that The Matrix is one of the films which function as a kind of Rorschach test [ setting in motion the universalized process of recognition, like the proverbial painting of God which seems always to stare directly at you, from wherever you look at it — practically every orientation seems to recognize itself in it? Reaching the End Of the World