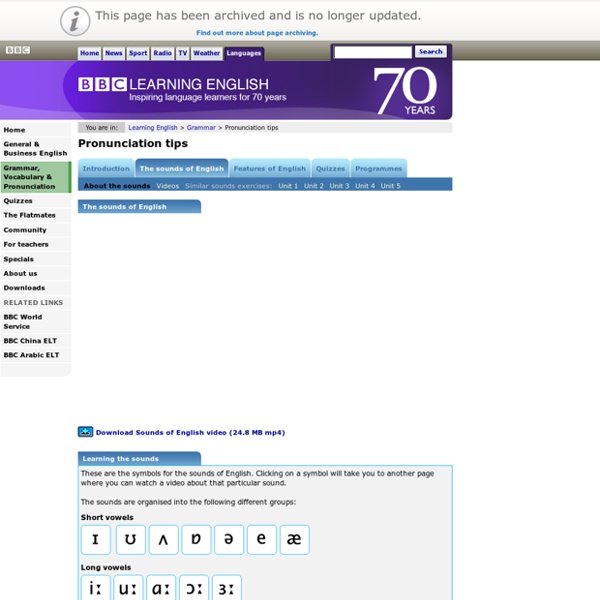 The videos in the Pronunciation Tips section of this site are presented by Alex Bellem. Alex has an undergraduate degree in Arabic and Turkish. She followed this with an MA in (Theoretical) Linguistics at University College London (UCL) and a PhD in Linguistics at the School of Oriental and African Studies (SOAS) where she focused on Arabic phonology and phonetics. She's also a CELTA-qualified English language teacher and spent a few years teaching English as a Foreign Language. At the time these videos were made in early 2008 Alex was lecturing part-time in the Linguistics Department at SOAS and was working as a Pronunciation Linguist in the BBC's Pronunciation Unit. The videos were shot by J-P Newman and many thanks to Matt Cleghorn for his enormous contribution to their editing. Thanks also to Professor J C Wells for his insights.

Pronuciation app New Version (February 2016) includes: - New improved interface (including Tablet improvements) - English Dictionary search - Text translations for: Spanish, Korean, Chinese (Simplified and Traditional) (English version only) Future updates will contain a speech anatomy section. This application was originally designed at the University of Iowa to help students learning how the sounds of different languages are produced. The final ed sound of the simple past tense of regular English verbs There are three ways to pronounce the final –ed of regular verbs in the simple past. This pronunciation is determined by the final sound of the verb in the base form : Is it a voiced consonant, an unvoiced consonant, or a vowel sound? Learn more about vowel sounds and voiced and unvoiced sounds in the lesson on English phonetics . Before you continue, review the lesson on the simple past . Note that in all the examples below the first column represents the IPA ( International Phonetic Alphabet ) symbol for the final sound of the verb in its base form. After unvoiced sounds such as p, f, s, k,

Online English pronunciation exercise/test Speaking and pronunciation of English words is the most difficult part for people learning English as a second language to do well. Unlike other languages, in English you don't always say a word like it is written/spelt. Not only do the sound/pronunciation of letters often change between words, but and in many words some of the letters are not pronounced (are silent). The Best Websites For Learning English Pronunciation Ways to Help ELLs Learn Pronunciation is the headline of one of my Education Week Teacher columns. I had to make a lot of difficult choices to come up with this latest “The Best…” list. One decision I made was to focus this list more on Beginning and Early Intermediate English Language Learners, or for more advanced ELL’s who primarily would use these sites more to “brush-up” or review some basic pronunciation skills. I am developing another list that I’ll call The Best Sites For Developing English Conversational Skills. That one will probably be geared more towards Intermediate and Advanced English Language Learners, and will include more of the sites I received from readers in my call for recommendations.

Pronunciation Symbols Our dictionaries provide helpful information about the pronunciation of words. On this page you can find a list of symbols used in our range of dictionaries, in the form of an interactive chart, as well as information about stress and alternative pronunciations. Pronunciation guide Below you can find an interactive version of the well-known phonemic chart put together by author Adrian Underhill for his book Sound Foundations. The British English editions of our dictionaries use these symbols from the International Phonetic Alphabet (IPA), plus the symbols /i/, /u/ (e.g. friendly, actually) and /x/ (e.g. loch). You will need Flash player installed on your machine to view the chart. Audio Stories & Brain Games For Kids Windswept(5 mins) Written by Nadine D’Souza. A Copperpod tree learns that it takes two to tango. Piggis Play Games(6 mins) Written by Dave Donicci. Boy and girl pigs tackle outdoor games. The Persistent Rain Cloud(6 mins) Written by Nadine D’Souza.

English Consonant Sounds Consonant letters and their sounds A consonant letter usually represents one consonant sound. Some consonant letters, for example, c, g, s, can represent two different consonant sounds. (Одна согласная буква обычно передает один согласный звук. Некоторые согласные буквы, например, c, g, s, могут передавать два разных согласных звука.) The Best Sites To Practice Speaking English This was one of the trickiest “The Best…” list for me to compile. As I was going through my favorites, and all of the great suggestions others contributed, I concluded that it might work best to really create two lists. The first list — this one — will highlight sites that actually have students recording their own voices in a number of different ways and post their speaking assignments online. The second list, which I’ll publish later this month and will include a number of the sites that readers suggested, will focus on sites where students have to listen to spoken examples for developing better pronunciation skills. That next list will be called “The Best Sites For Learning English Pronunciation.”

Aspects of Connected Speech Index Aspects of Connected Speech Here is a list of the most important aspects of connected speech, i.e. how words change when caught up in the great rush of everyday conversation. If you are not a phonetics/phonology student then skip over the technical bits and just listen to the examples. Weak Forms Assimilation of Place of Articulation Yod Coalescence Improve English Pronunciation with free podcast Monday August 21st, 2017 English Pronunciation Podcast 17- Syllable Stress in Words of 3 or More Syllables (Part II): This podcast continues to teach you how to find the stress in words which have three or more syllables. Share I recommend that you listen to podcast #14 and 15, before using this one, if you haven't already. In last week's podcast, we learned about a group of suffixes which do not affect the stress of the root word.