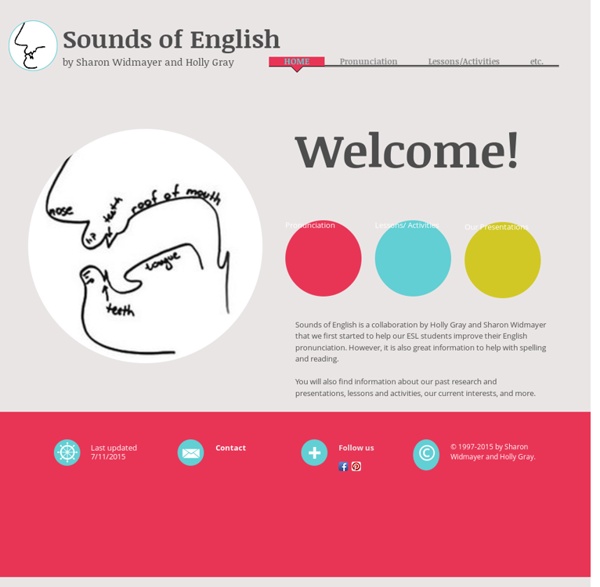 Pronunciation: 3 Principles On How To Make Your Spoken English Sound More Natural – A Guest Post I recently had the privilege and honour of being interviewed by my fellow English Language trainer, Elena Mutonono on her recent webinar “Accent Training for Business People“. For those of you who didn’t sign up for the webinar, here’s the recording. In that webinar we discussed the benefits of accent training for non-native business people and how accent training improves communication. Moving on to “Half and “Half” When the children are using both words and drawing in their writing (usually in Grade 1), it is then time to move to “Half and Half.” If in Grade 2 students are reluctant to write or have not had much writing experience, it may be prudent to start out in the first few weeks with “Half and Half.” “Half and Half” is a format where the top half of the paper is unlined for the drawing, while the bottom half of the paper is lined for writing. Procedure:

The Primary Differences Among Major International English Dialects The British Empire hasn’t been in existence for almost three-quarters of a century. At the peak of its might, it covered close to a quarter of the world’s land area and ruled a fifth of its population. But the empire changed, transformed, and passed as all things pass. When the territories Britain had conquered gained freedom, there was one thing that remained as evidence of how grand the empire once was—the English language. It’s the second most common language in the world in terms of the number of native speakers; it’s the most widely spoken language of all when you include people who use it as a second language.

About “Driting” · “Driting” is seen at the end of Kindergarten or in the Writing Block at the beginning of Grade 1. · “Driting” is the combination of drawing along with some “squiggles,” some letters, some numbers, a few words (often copied from print around the room). The student proceeds to “read” what they have “written.” How long to use “Driting” in your classroom depends on your class. It could last a few days or a few weeks. PlayPhrase.me: Endless stream of movie clips of specific phrases () Our service will teach you to understand spoken English. The purpose of PlayPhrase.me service is to learn english using TV series. We create video sequence from scenes that contain the word you search for.

Road to Reading Writing and Technology The goal of this section is to develop writing skills through mini-lessons, modeling, shared writing, and independent writing. Using technology with writing is an excellent means of stimulating student creativity. Word processors can be used to draft, revise, edit and publish student work. Some scheduling of student computer use may be necessary in most classrooms since the number of computers is usually limited, although schools with computer labs would not experience this obstacle. American Accents and Dialects Public Domain / CIA NOTE: This guide uses the International Phonetic Alphabet (IPA). For information about this notation, please visit my page of International Phonetic Alphabet Resources. There are obviously many North American accents.

Dolch Kit Teachers and Parents: This website contains a "Dolch Kit" with many practice activities for students to use as they learn the Dolch, 220 high frequency words. The Dolch high frequency list was published by Edward William Dolch, Ph.D. in his book, Problems in Reading, The Garrard Press, 1948. The Dolch list of high frequency words comprises the 220 words, excluding nouns, that were common to the word lists of the International Kindergarten Union, The Gates List and the Wheeler-Howl List --- all lists that were used in beginning reading programs in the 1940's. The Dolch List has held up over time as reliable high frequency word list that is used in beginning reading programs. Mosaic Email Group Home "How do students become thoughtful, independent readers who deeply understand what they read?" The authors of Mosaic of Thought, Strategies That Work, I Read It But I Don't Get It, Reading With Meaning, Do I Really Have to Teach Reading?, and Learning Along the Way have taught us how to model and explicitly teach the strategies students need to become more proficient readers. The idea for this group was born out of the teachers taking the journey through this instructional paradigm.

Clap: Clap each letter. Snap and Clap: Snap the vowels and clap the consonants. Stomp: Stomp each letter. Pinch: Pinch each letter. Movie Star Kisses: Put your hand to your mouth, throw each letter a kiss, like Marilyn Monroe at the Oscars.