Youtube. Voiced vs. Voiceless Consonants. Phoneticists (who study the sound of the human voice) divide consonants into two types: voiced and voiceless. 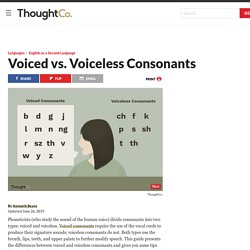 Voiced consonants require the use of the vocal cords to produce their signature sounds; voiceless consonants do not. Both types use the breath, lips, teeth, and upper palate to further modify speech. This guide presents the differences between voiced and voiceless consonants and gives you some tips for using them. Voiced Consonants Your vocal cords, which are actually mucous membranes, stretch across the larynx at the back of the throat. An easy way to determine whether a consonant is voiced or not is to place a finger on your throat. 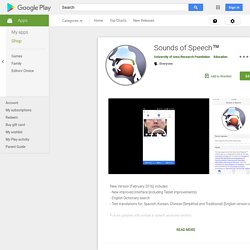 This application was originally designed at the University of Iowa to help students learning how the sounds of different languages are produced. Since its production, it has become a milestone for phonetics teaching tools around the globe. Sounds of Speech™ provides a comprehensive understanding of how, physiologically, each of the speech sounds of American English is formed. It includes animations, videos, and audio samples that describe the essential features of each of the consonants and vowels of American English. Please send any questions or issues to soundsofspeech.uiowa@gmail.com. Phonemic chart. Pronunciation. BBC Learning English. Pronunciation app1. Pronunciation. Pronunciation Symbols.

Our dictionaries provide helpful information about the pronunciation of words. 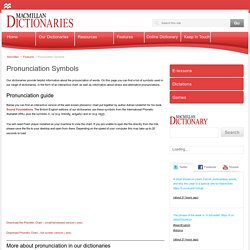 On this page you can find a list of symbols used in our range of dictionaries, in the form of an interactive chart, as well as information about stress and alternative pronunciations. Pronunciation guide Below you can find an interactive version of the well-known phonemic chart put together by author Adrian Underhill for his book Sound Foundations. The British English editions of our dictionaries use these symbols from the International Phonetic Alphabet (IPA), plus the symbols /i/, /u/ (e.g. friendly, actually) and /x/ (e.g. loch). 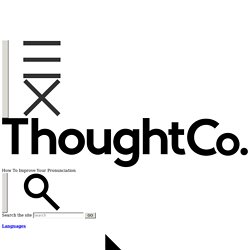 Without clear pronunciation, it is difficult to make yourself understood. First start by learning individual sounds. After that, focus on the music of the language. You might be surprised by the following statement: Pronouncing every word correctly leads to poor pronunciation! In other words, some words — the content words — receive more focus, whereas other words — function words — are less important. Difficulty: Hard. Provide definition and meaning. 50 Incorrect Pronunciations That You Should Avoid. By Maeve Maddox Fred Astaire drew laughs back in the Thirties with his song “Let’s Call the Whole Thing Off” in which the lovers can’t agree on the pronunciation of words like either, neither, and tomato. 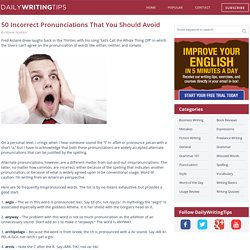 Word of caution: I’m writing from an American perspective. Here are 50 frequently mispronounced words. 1. aegis – The ae in this word is pronounced /ee/. 2. 3. 4. arctic – Note the C after the R. 5. accessory – the first C has a “hard” sound. 10. 100 Words Almost Everyone Mispronounces. Mispronounces. Happy Campers and The Inks 1. Happy Campers and The Inks 1 app is a brand-new vocabulary-building game designed for non-native learners of American English aged 6-7). 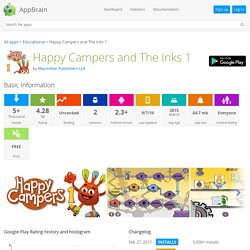 Players are guided by The Inks: five fun characters who accompany and motivate children as they practice the vocabulary and progress on their language-learning journey. The Happy Campers and The Inks (1) app: • Motivates and engages young learners with cute, and colourful characters, vibrant images, and lively music in a stimulating game environment.• Challenges players by increasing the language level, game speed and points available as they progress through each level and stage.• Consolidates learning and encourages practice and revision at each review stage.• Rewards learners with trophies and awards for top scores and speeds.The Happy Campers and The Inks (1) app is a great way for young learners following Macmillan Education’s American English Happy Campers course to practice and build their language skills at home.

Sounds: The Pronunciation App. You can look up and listen to words and phrases in the WORDLIST, plus record and compare your own pronunciation. 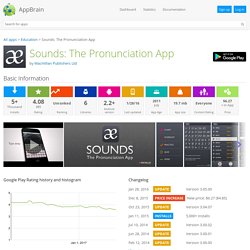 If you’re using a Macmillan coursebook, you can now buy additional wordlists directly inside the app. PRACTISE your pronunciation reading, writing and listening skillsTest yourself with one of the pronunciation QUIZZESLEARN with lesson plans, videos and top tips for teachers, and study hints for students ► Interactive Phonemic Chart (British and American English) with high quality audio - tap to hear a sound, or tap and hold to hear the sound and an example word.► Work in British or American English, and switch between them at any time.► Vocabulary Wordlist (with over 650 words):- Phonemic transcriptions and audio- Record your own pronunciation- Purchase new wordlists from directly inside the app. Wordlists are available for popular Macmillan coursebooks, as well as topic-based lists. . - Bug fixes for error when updating app. Sounds: The Pronunciation App. Sounds: Pronunciation App FREE. This free version includes Interactive Phonemic Charts for British English and American English. 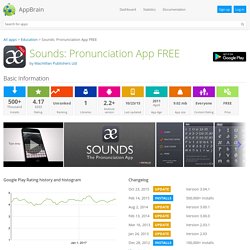