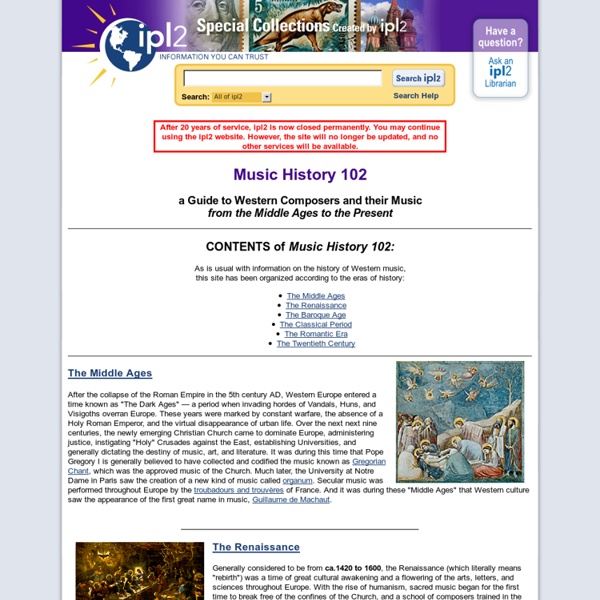 a Guide to Western Composers and their Music from the Middle Ages to the Present CONTENTS of Music History 102: As is usual with information on the history of Western music, this site has been organized according to the eras of history: The Middle Ages After the collapse of the Roman Empire in the 5th century AD, Western Europe entered a time known as "The Dark Ages" — a period when invading hordes of Vandals, Huns, and Visigoths overran Europe. The Renaissance Generally considered to be from ca.1420 to 1600, the Renaissance (which literally means "rebirth") was a time of great cultural awakening and a flowering of the arts, letters, and sciences throughout Europe. The Baroque Age Named after the popular ornate architectural style of the time, the Baroque period (ca.1600 to 1750) saw composers beginning to rebel against the styles that were prevalent during the High Renaissance. The Classical Period The Romantic Era The Twentieth-Century

How to Learn About Classical Music Classical music wasn&#039;t always about violins and conductors. Singing had been going on for centuries before Pope Gregory came along, but he was the first to come up with the idea of writing music down--and, because if this, sheet music was born. Gregory gave each note that he could come up with (four in total) a corresponding letter: A through D. We still use these notes today, but E, F, G and all the half-notes between each note on the scale have been added since Gregory&#039;s time. Soon, monks started writing and singing songs using Gregory&#039;s rules. During an age when visual art and religious beliefs were being reborn, music was not about to be left out. The Baroque Era emerged around the late 1600s, it was fashionable for the royalty and rich households to employ a composer (sort of like a maid or a chauffeur). The classical period lasted from the mid-1700s to early 1800s, yielding some of the most popular composers in history.

Intro to Classical Music What is classical music? When asked the question, “what is classical music?”, elevator music comes to the minds of many people. Although it is grossly inaccurate to say that classical music is elevator music, the two terms are similar in one way. Origin and Definition The term classical music originates from the Latin term classicus, meaning taxpayer of the highest class. Periods of Classical Music Music historiographers classified the six periods of music by stylistic differences. Before 1400 – Medieval – characterized by Gregorian chant, mostly religious 1400-1600 – Renaissance – increase of secular music, madrigals, and art song 1600-1750 – Baroque – known for its intricate ornamentation 1750-1820 – Classical – balance and structure 1820-1900 – Romantic – emotional, large, programmatic Beyond 1900 – 20th Century – limitless Styles within Classical Music Where to Begin For starters, begin with what you already know. Above all else, don't be hesitant.