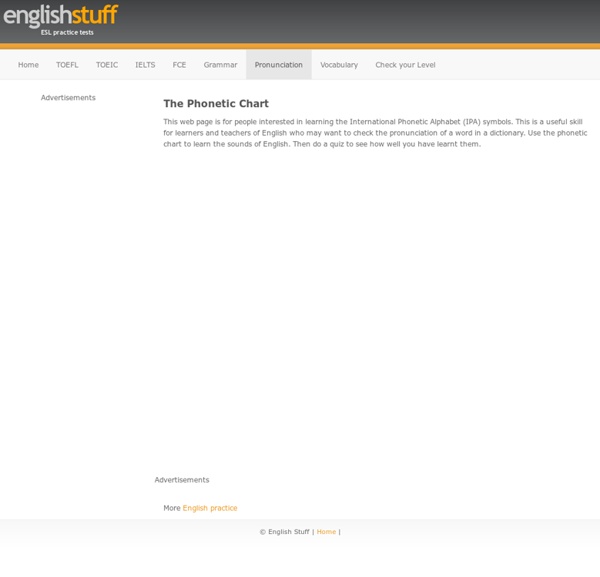 Motivating speaking activities for lower levels Planning time has been shown to increase production in speaking tasks. Lower level learners often find it especially difficult to speak spontaneously, so these activities incorporate 'thinking time' during which learners can prepare for speaking by planning what they are going to say, and asking the teacher or using a dictionary to look up missing vocabulary. The following activities are relatively short, with minimal materials preparation time for the teacher. About Animals for English Learners [ED] = Education Report; [EX] = Explorations; [HE] = Health Report; [IN] = In the News; [SN] = Science in the News; [TA] = This is America Earlier Programs Without MP3 Files About ESL Speaking Activities There are many approaches to ESL speaking activities which used in English classes. Some are focussed on pronunciation, some more basic speaking activities are controlled or guided activities, and finally ESL discussion or conversation activities. All are important. In this article I will focus on speaking activities which offer controlled practice, and thus the support that so many students need.

4 Commonly-used Irregular Verbs - Part 4 (1:46) There is also a Video of Commonly-used Irregular Verbs - Part 4 Listen and Repeat to Learn Verb Conjugation and Pronunciation 50 000+ Free ESL, EFL worksheets made by teachers for teachers English Login See more See less FAQ | About us | Terms of Use | Your Privacy | Your Copyright | Advertise with Us | Press | Links | Contact The iSLCollective Team | Google+ Developing Speaking Activities Traditional classroom speaking practice often takes the form of drills in which one person asks a question and another gives an answer. The question and the answer are structured and predictable, and often there is only one correct, predetermined answer. The purpose of asking and answering the question is to demonstrate the ability to ask and answer the question. In contrast, the purpose of real communication is to accomplish a task, such as conveying a telephone message, obtaining information, or expressing an opinion. In real communication, participants must manage uncertainty about what the other person will say.

3 Commonly-used Irregular Verbs - Part 3 (1:54) There is also a Video of Commonly-used Irregular Verbs - Part 3Download MP3On Windows, right-click the link. On Macintosh, option-click the link or control-click the link. Try listening to this podcast a few times every day for one week. feel, felt, felt hold, held, held stand, stood, stood understand, understood, understood lose, lost, lost catch, caught, caught buy, bought, bought send, sent, sent fall, fell, fallen choose, chose, chosen sleep, slept, slept speak, spoke, spoken meet, met, met lead, led, led bite, bit, bitten hit, hit, hit drive, drove, driven break, broke, broken Basics of Speaking Activities in the ESL Classroom Please feel free to leave any constructive criticism, feedback or questions in the comments section :) Please note that while all of this is my own work, I have obviously been influenced by previous trainers and teachers I have worked with, as well as two years of trawling through the web to help improve my own practice. I have tried to reference all data and material taken from other writers to the best of my ability. Any similarities to other works is completely coincidental, please contact me if you believe that anything is referenced incorrectly. One of the things that students always request when we get feedback from them is “more speaking.” This presents us with several issues: Is teaching speaking just activating language?

Broad Sky Blog : Over 1,000 of the most common fixed expressions and idioms in the English language This list has been compiled of the most fixed expressions and idioms in the English language--with 1,157 items. The reason that we have posted this list is to get our current and potential students to start thinking like a linguist, so that they can have an easier time translating things, and more productive study time when they sit down to complete their assignments. . Though this list in no way should be thought of as a complete list of idioms and fixed expressions, it however be thought of as a reference tool for a student trying to classify his/her native language, and as an aid to help said student break down said language into the most basic parts of usage. What we mean by language will generally find him/herself in when speaking whatever language on a daily basis. Though this list has been written in English, it needs to be clarified that it has been compiled as a template for languages. during the day