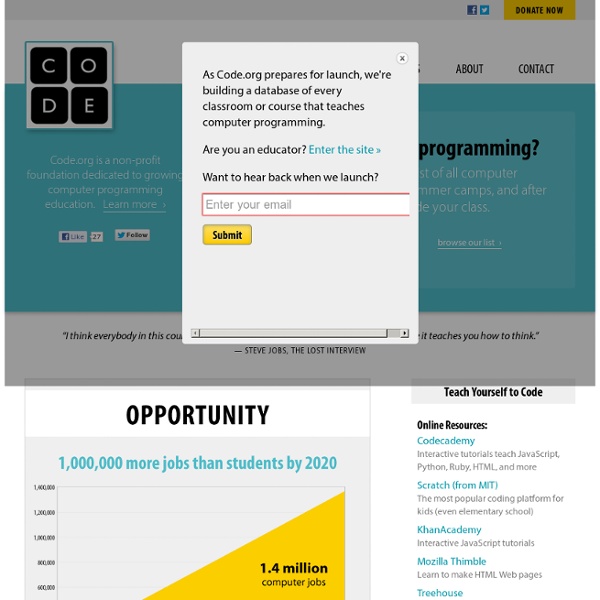 Read, Write, Innovate! Silicon Valley May 3rd, 4th, and 17th, 9am-4pm What do Instagram, Snapchat and Twitter have in common? They were all created by people who knew how to code. Programming is a skill that gives you the ability to create and innovate. 10 Best Sexual Drinking Games Some of the best sexual drinking games can be done either in an intimate setting with only you and your girlfriend or you can make it a party and have multiple people. The ten most commonly played sexual drinking games are: Nine cans of beer or the floor.

Designers: Learn To Code! Here's How To Start A friend, formerly a competitive fighter, once asked me: "Have you ever been punched in the face?" He and I were about to get in a bar fight. He needed to know if I could handle myself: Apparently, the fear of getting punched in the face holds you back from being effective in a fight. But once you’ve been punched in the face, you realize it’s not so bad—it’s easy to fling yourself into a fight without hesitating. Similarly, learning how to code can be intimidating if you’ve never done it before.

Unfit for Work: The startling rise of disability in America By Chana Joffe-Walt In the past three decades, the number of Americans who are on disability has skyrocketed. The rise has come even as medical advances have allowed many more people to remain on the job, and new laws have banned workplace discrimination against the disabled. Every month, 14 million people now get a disability check from the government. The federal government spends more money each year on cash payments for disabled former workers than it spends on food stamps and welfare combined. Getting Started: Building a Chrome Extension Extensions allow you to add functionality to Chrome without diving deeply into native code. You can create new extensions for Chrome with those core technologies that you're already familiar with from web development: HTML, CSS, and JavaScript. If you've ever built a web page, you should feel right at home with extensions pretty quickly; we'll put that to the test right now by walking through the construction of a simple extension that will give you one-click access to pictures of kittens.

R'ha - A Short Sci-Fi Film That Could Make Hollywood Jealous [VBideo] Steven On January 11, 2013 What if, instead of man versus robots it was an alien life form that was attacked by the robotic life that they had created? This is the premise behind an awesome short science fiction film called R’ha that was directed and animated by 22-year-old Kaleb Lechowski and I gotta tell you Kaleb could teach Hollywood a thing or two. Thing Thing The most generic type of item. Instances of Thing may appear as values for the following properties More specific TypesExamples Getting the Hang of GitHub A project is always more fun when you've got friends working with you, but how can do it when working on a coding project? I'll keep my keyboard to myself, thanks. Enter GitHub. With this web service, you can share your coding projects and collaborate with ease!

The Starter's Guide to Brewing Beer Serious about making large batches of beer? Splurge for a propane-powered rig with a three-tiered brew stand. This setup, by Indiana-based Blichmann Engineering, costs about $2000 and features a trio of 20- to 30-gallon pots and gas burners that put out 216,000 Btu per hour. (The high heat quickly boils large amounts of liquid, shaving hours off the brewing process.) Sections and Outlines of an HTML5 Document - Web developer guide Note: The HTML5 outline algorithm as described below is not implemented in user agents, as a consequence, users who make use of heading semantics are exposed to the HTML 4 document structure. The description of problems solved by HTML5 is theoretical only. The HTML5 specification brings several new elements to web developers allowing them to describe the structure of a web document with standard semantics. This document describes these elements and how to use them to define the desired outline for any document.