So you want to be a programmer, huh? Here are 27 ways to learn online 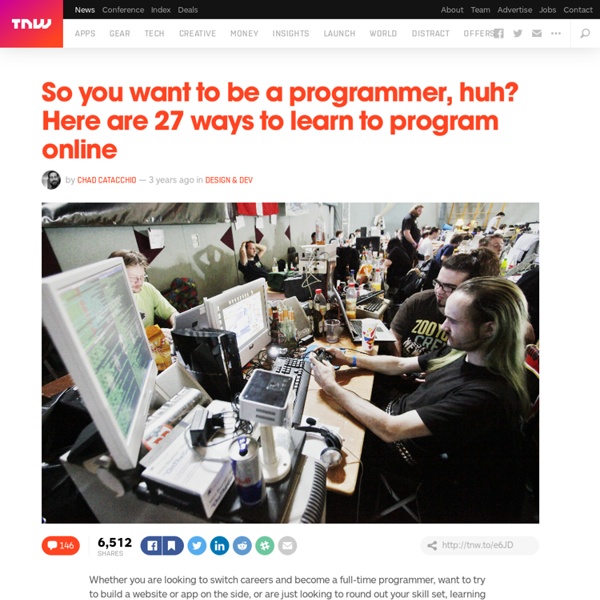 Whether you are looking to switch careers and become a full-time programmer, want to try to build a website or app on the side, or are just looking to round out your skill set, learning to code has certainly been something a lot of people have started to do lately. And while being a programmer might not be for everyone, there is a lot to be said about gaining a better, more educated view of how all those pixels get moved around all those screens. Before we delve into our list of learning resources sites, we wanted to share some advice from Marissa Louie, a self-taught product designer for Ness Computing. A former startup founder, Louie told TNW that the hardest part of being self-taught – whether it’s design, programming, or any other discipline is, “gathering the courage. The most important barrier is just to overcome your fears” (she also said having the ability to follow instructions helps as well). F**k it, we'll do it live! 1. 2. 3. 4. 5. 6. 7. 8. 9. 10. 11. 12. 13. 14. 15. 16. 17.

Become a Programmer, Motherfucker If you don't know how to code, then you can learn even if you think you can't. Thousands of people have learned programming from these fine books: Learn Python The Hard Way Learn Ruby The Hard Way Learn Code The Hard Way Open Source Software Open Source Software: Software Revolution Begins Tutorials On Python Programming UNIX / Linux Tutorial for Beginners A beginners guide to the Unix and Linux operating system. Eight simple tutorials which cover the basics of UNIX / Linux commands. Introduction to the UNIX Operating System What is UNIX? Files and processes The Directory Structure Starting an UNIX terminal Tutorial One Listing files and directories Making Directories Changing to a different Directory The directories . and ..

YAML Tutorial - Essentials This website uses cookies to display custom content and advertising. We therefore share information about your use of our site with Google. See details From Essentials YAML Rules Code Wars: Ruby vs Python vs PHP [Infographic] Just as the Japanese, Spanish and French languages are uniquely different, programming languages also have their variations, some more popular and easier to use than others. With the recent introduction of some new ones, there is a ‘war’ of modern day languages. What’s easier and faster to use is not always the best option. Below we highlight three of today’s most popular programming languages. Whether you’re looking to learn PHP, grab that hot new Python class, or finally learn Ruby and conquer Rails, this infographic compares how they differentiate, who uses them, and their popularity.

Tutorial - Learn Python in 10 minutes NOTE: If you would like some Python development done, my company, Stochastic Technologies, is available for consulting. This tutorial is available as a short ebook. The e-book features extra content from follow-up posts on various Python best practices, all in a convenient, self-contained format. All future updates are free for people who purchase it. Preliminary fluff So, you want to learn the Python programming language but can’t find a concise and yet full-featured tutorial.

How an Upstart Company Might Profit From Free Courses - College 2.0 By Jeffrey R. Young Coursera has been operating for only a few months, but the company has already persuaded some of the world's best-known universities to offer free courses through its online platform. Colleges that usually move at a glacial pace are rushing into deals with the upstart company. But what exactly have they signed up for? And if the courses are free, how will the company—and the universities involved—make money to sustain them? md5 checksum how to January 21st, 2007 mysurface Posted in md5sum, Misc | Hits: 631381 | 39 Comments » First of all, what is md5 ? MD5 is an algorithm that is used to verify data integrity through the creation of a 128-bit message digest from data input (which may be a message of any length) that is claimed to be as unique to that specific data as a fingerprint is to the specific individual. MD5, which was developed by Professor Ronald L. Rivest of MIT, is intended for use with digital signature applications, which require that large files must be compressed by a secure method before being encrypted with a secret key, under a public key cryptosystem.

How do I make games So where do I start? Tetris. Something I need to mention is that when you make your Tetris game, you can't call it "Tetris". Tetris is a trademark of the Tetris Company who is owned by Alexey Pajitnov, the creator of Tetris. It is his exclusive right to use the name Tetris, and I believe they may have won a lawsuit saying that you cannot make a falling blocks game with the syllable "tris", as it is obviously playing off the popularity of the of the name Tetris.

Google Releases Open-Source Online-Education Software - Wired Campus Google has taken what its officials call an “experimental first step” into online education, releasing open-source software called Course Builder in hopes that universities will use it to deliver free online courses. The search giant says it is in talks with edX—a partnership among Harvard University, the Massachusetts Institute of Technology, and the University of California at Berkeley to offer free online courses—though officials declined to comment further. A post on Google’s research blog this week also cited nine universities interested in using the platform, including Stanford University. “We’ve been in touch with a number of universities, and I think it’s a confusing time or an exciting time,” said Peter Norvig, Google’s director of research, in an interview with The Chronicle late Wednesday.

Anonymous Pro Anonymous Pro (2009) is a family of four fixed-width fonts designed with coding in mind. Anonymous Pro features an international, Unicode-based character set, with support for most Western and Central European Latin-based languages, plus Greek and Cyrillic. Anonymous Pro is based on an earlier font, Anonymous™ (2001), my TrueType version of Anonymous 9, a Macintosh bitmap font developed in the mid-’90s by Susan Lesch and David Lamkins. Anonymous Pro is distributed with the Open Font License (OFL). There are two versions: Anonymous Pro and Anonymous Pro Minus.

The Pitfalls of Open Sourcing Your Startup Free and Open Source Software (FOSS) refers to software whose source code is freely available for modification and redistribution. Typically open source projects tend to have strong communities of programmers, developers and most importantly, uses backing them, and it is this community support which ultimately drives these initiatives to succeed. Open Source Software can be found virtually everywhere, from programming languages like Python, the Mozilla suite of applications, the Git version control system and the largest collaborative project in computer history, the Linux kernel. On the surface, releasing the source code of your startup’s application/service to the general public might seem like a good way to advance one’s startup for a very low price, but in reality there exist a few pitfalls. Moreover, since the code is open source, it is visible to all, which presents a potential threat that a competitor may use it to their advantage. What are your thoughts?

Professor Leaves Teaching Post at Stanford, Hoping to Reach 500,000 at Online Start-Up - Technology By Nick DeSantis A Stanford University professor who made headlines this past fall by teaching an online artificial-intelligence course to more than 160,000 students has left his teaching post at the university to seek an even bigger audience. The professor, Sebastian Thrun, announced last week that he would teach free online courses through a company he co-founded instead, with the goal of reaching half a million students at once. The leap to the commercial sector may have been his plan all along: He gave up tenure in April to continue working for Google, where he helped create a driverless car. Two months later, he started a company called Know Labs, and its technology powered the fall course. The professor-turned-commercial-educator is now betting that students will try free courses that teach in-demand skills on flexible schedules—even if the courses are not affiliated with a prestigious university, and their work doesn't earn them a degree.