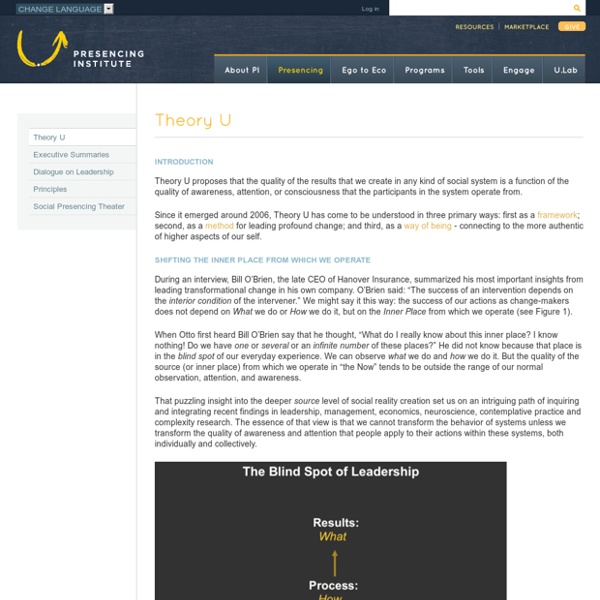 Introduction Theory U proposes that the quality of the results that we create in any kind of social system is a function of the quality of awareness, attention, or consciousness that the participants in the system operate from. Since it emerged around 2006, Theory U has come to be understood in three primary ways: first as a framework; second, as a method for leading profound change; and third, as a way of being - connecting to the more authentic of higher aspects of our self. Shifting the Inner Place from Which We Operate During an interview, Bill O’Brien, the late CEO of Hanover Insurance, summarized his most important insights from leading transformational change in his own company. O’Brien said: “The success of an intervention depends on the interior condition of the intervener.” When Otto first heard Bill O’Brien say that he thought, “What do I really know about this inner place? Fig. 1: The Blind Spot of Leadership Leading From the Emerging Future

How To Create a Sense of Purpose In Your Life - UNREASONABLE.is Did you inherit your sense of purpose from others? Or have you cultivated a purpose in your life that is uniquely your own? Here’s a very simple litmus test to figure it out and a way to bring more purpose to your life. My parents were immigrants and worked long hours just to survive.

Fixed vs. Growth: The Two Basic Mindsets That Shape Our Lives “If you imagine less, less will be what you undoubtedly deserve,” Debbie Millman counseled in one of the best commencement speeches ever given, urging: “Do what you love, and don’t stop until you get what you love. Work as hard as you can, imagine immensities…” Far from Pollyanna platitude, this advice actually reflects what modern psychology knows about how belief systems about our own abilities and potential fuel our behavior and predict our success. Much of that understanding stems from the work of Stanford psychologist Carol Dweck, synthesized in her remarkably insightful Mindset: The New Psychology of Success (public library) — an inquiry into the power of our beliefs, both conscious and unconscious, and how changing even the simplest of them can have profound impact on nearly every aspect of our lives.

The Blind Spot: Uncovering the Grammar of the Social Field  This post is a bit longer than usual. But if you are interested in the invisible dimension of leading profound social change -- and in a blend of action science and consciousness to illuminate that blind spot -- it may be worth the read. My father is a farmer. As one of the pioneers of bio-dynamic farming in Germany, he devotes all his attention to cultivating the quality of the soil in his fields.

How to Find Your Purpose and Do What You Love “Find something more important than you are,” philosopher Dan Dennett once said in discussing the secret of happiness, “and dedicate your life to it.” But how, exactly, do we find that? Surely, it isn’t by luck. Negentropy In a note to What is Life? Schrödinger explained his use of this phrase. Indeed, negentropy has been used by biologists as the basis for purpose or direction in life, namely cooperative or moral instincts.[6] In 2009, Mahulikar & Herwig redefined negentropy of a dynamically ordered sub-system as the specific entropy deficit of the ordered sub-system relative to its surrounding chaos.[7] Thus, negentropy has units [J/kg-K] when defined based on specific entropy per unit mass, and [K−1] when defined based on specific entropy per unit energy. This definition enabled: i) scale-invariant thermodynamic representation of dynamic order existence, ii) formulation of physical principles exclusively for dynamic order existence and evolution, and iii) mathematical interpretation of Schrödinger's negentropy debt. Information theory[edit]

Gandhi's 10 Rules for Changing the World, by Henrik Edberg “You must not lose faith in humanity. Humanity is an ocean; if a few drops of the ocean are dirty, the ocean does not become dirty.” “The difference between what we do and what we are capable of doing would suffice to solve most of the world’s problem.” “If I had no sense of humor, I would long ago have committed suicide.” Mahatma Gandhi needs no long introduction. Everyone knows about the man who lead the Indian people to independence from British rule in 1947. Top 10 Machine Learning Blogs That Are Quite Readable 1. Data mining: Text Mining, Visualization and Social Media A machine learning blog by Matthew Hurst, who is an Artificial Intelligence researcher and data scientist. He is presently a principal architect at Microsoft. Recent article titles include: The Economist gets in on the AI FluffAI, Artificial Birds and Aeroplanes

Roy Spence and Haley Rushing For too long now, the answer to the question, "What's the purpose of business?" has been something along the lines of 'to maximize profit and increase shareholder value.' But could the era of relentless sole focus on shareholder value now be over? In a Financial Times article on March 12th, even Jack Welch declared the obsession with short-term profits and share-price gains as "a dumb idea." We say, "Amen." ‘Present Shock’ by Douglas Rushkoff “Present Shock” is one of those invaluable books that make sense of what we already half-know. Playing on the title of Alvin Toffler’s influential 1970 “Future Shock,” which sounded an alarm about what Mr. Toffler called “a personal perception of too much change in too short a period of time,” Douglas Rushkoff analyzes a very different phenomenon. The future arrived a little while ago, he posits — maybe with Y2K, maybe with Sept. 11. Now it’s here.

Jerry Michalski Jerry Michalski is the founder and president of Sociate, a technology consulting firm. Through Sociate, Jerry offers advice, speaks, writes and invests, taking a more hands-on role in developing the products and services he has written about for a dozen years. His interests include the ways that technology and people interact -- in private and business settings, and at all scales: as individuals, businesses, economies and societies. Jerry has been using his Brain non-stop for over10 years and has over 160,000 thoughts inside it.

Find Your Niche in 60 Minutes or Less With These 4 Questions Creating a value proposition that investors and customers are likely to buy into isn’t easy. After all, you need to distinguish your brand from the thousands of other startups competing against you every day. With consumers today being equipped with more knowledge than ever before, your ability to not only create but innovate will be tested constantly. This sort of demand is a lot to ask of one’s willpower. Jerry Michalski Jerry Michalski (ma-call-ski) is the founder of REX, the Relationship Economy eXpedition. He is a pattern finder, lateral thinker, Gladwellian connector, facilitator and explorer of the interactions between technology, society and business. From 1987 to 1998, Jerry was a technology analyst, focusing not on quarterly earnings but rather on which technologies would be useful and which would be distractions, what trends and forces create new potential, and where all these forces might take us over a 20-year timeframe. For the last five years of that period, Jerry was the Managing Editor of Esther Dyson's monthly tech newsletter Release 1.0, as well as co-host of her annual conference, PC Forum. He was fortunate to be on duty when the Internet showed up. Early in 2010 Jerry launched REX, a private, collaborative inquiry into the next economy.

6 Simple Rituals To Reach Your Potential Every Day It’s Tuesday morning at 8 a.m. Two San Francisco entrepreneurs are pitching their ventures to potential investors today. They’d both agree that this is one of the most important days of their lives. This is the story of Jane and Joe... Jane was up until 4 a.m. putting the final touches on her deck. The end of capitalism has begun The red flags and marching songs of Syriza during the Greek crisis, plus the expectation that the banks would be nationalised, revived briefly a 20th-century dream: the forced destruction of the market from above. For much of the 20th century this was how the left conceived the first stage of an economy beyond capitalism. The force would be applied by the working class, either at the ballot box or on the barricades.