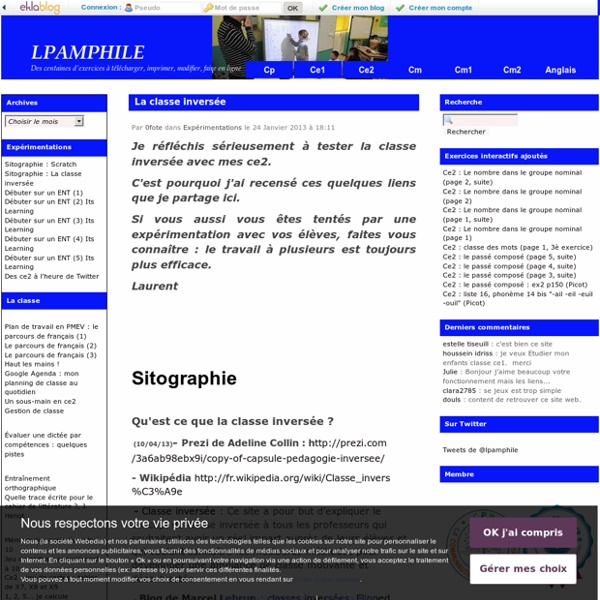 Living and Learning in the Digital Age Read Online at connectedyouth.nyupress.org Do today’s youth have more opportunities than their parents? As they build their own social and digital networks, does that offer new routes to learning and friendship? How do they navigate the meaning of education in a digitally connected but fiercely competitive, highly individualized world? Based upon fieldwork at an ordinary London school, The Class examines young people's experiences of growing up and learning in a digital world. Top 10 Best HTML5 Websites of 2014 Here are our editor's picks for the Top 10 Best HTML5 Websites of 2016 based on visual artistry, integrated sound, ease of use, and uniqueness. 1 | The Wilderness Downtown The Wilderness Downtown is an interactive music video for Arcade Fire's song ''We Used to Wait''. Visitors are asked to input the address of the home they grew up in and then the site uses Google Earth and HTML5 to create a personalized music video that takes the user on a journey back home. 2 | Heart of The Artic Heart of The Arctic takes users on an Arctic expedition/scavenger hunt through four distinct environments designed to show users the steps that would be needed to restore climate balance to the arctic region.

Encopresis (Fecal Incontinence) Causes, Symptoms and Treatment on MedicineNet Causes of Bedwetting The fundamental problem for children with primary bedwetting is the inability to recognize messages of the nervous system sent by the full bladder to the sleep arousal centers of the brain while asleep. In addition, bladder capacity is often smaller in bedwetting children than in their peers. Elimination disorders in children facts inBloom’s collapse undermined personalized learning and data standards efforts Personalized learning is all the rage. Tech magnates keep pointing to it as the “solution” to all sorts of educational challenges. Gates. Zuckerberg. Of course, when you drill down into what they’re talking about, it quickly becomes clear that there’s nothing at all clear about what “personalized learning” is or should be. But even if we stabilize our definition to focus on how data might inform educational processes, there’s a huge elephant in the room: where’s the data going to come from?

Top 10 Best Flash Websites of 2014 Here are our editor's picks for the Top 10 Best Flash Websites of 2017 based on visual artistry, integrated sound, ease of use, and uniqueness. 1 | Pharrell Williams - Happy Pharrell Williams has employed Flash and his creative style to create the world's first 24 hour music video. More importantly he uses the full complement of Flash media integration to create a web experience that fully conveys the song's theme in a way that a traditional video could not. 2 | Clouds Over Cuba This interactive multimedia documentary uses the immersive nature of Flash to allow the audience to relive the Cuban Missile Crisis 50 years later and discover what might have been.

Encopresis: From a Surgical View in Comparison to Psychiatric Management Passage of normal stools in an abnormal place and at abnormal times after the age of four years without organic causes, is more likely to be related to a psychological disturbance, (Freeman, 1993; Behrman et al., 2000). The term Encopresis is sometimes used in-correctly to describe chronic idiopathic constipation with fecal soiling. Encopresis is, in fact, defined as passage of stool, often normal, in inappropriate places and at inappropriate times; (Freeman, 1989). Another definition made by Fennig and Fenning (1999) is the involuntary or intentional repeated passage of feces into inappropriate places (e.g., clothing or floor); Borowitz et al. (2008), also encopresis is known as overflow incontinence of feces due to unresolved constipation that can lead to fecal retention and impaction. Other criteria for diagnosis are a frequency of at least once a month for at least 3 months and patient age of 4 years or more (American Psychiatric Association, 1994, 2000; Rintala, 2002).

A college kid created a fake, AI-generated blog. It reached #1 on Hacker News. GPT-3 is OpenAI’s latest and largest language AI model, which the San Francisco–based research lab began drip-feeding out in mid-July. In February of last year, OpenAI made headlines with GPT-2, an earlier version of the algorithm, which it announced it would withhold for fear it would be abused. The decision immediately sparked a backlash, as researchers accused the lab of pulling a stunt. By November, the lab had reversed position and released the model, saying it had detected “no strong evidence of misuse so far.” The lab took a different approach with GPT-3; it neither withheld it nor granted public access.