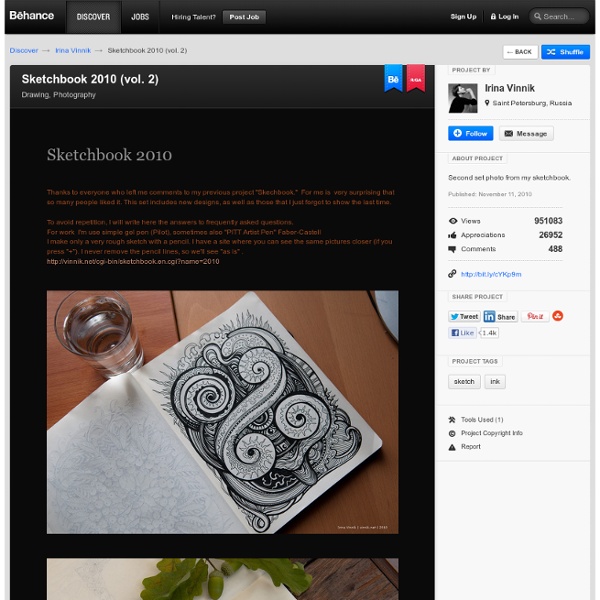 65+ Stunning Examples of Moleskine Art You won't be Able to Ignore No matter if you are a newbie in the world of drawing or your talent has been already appreciated, you most likely heard about Moleskine notebooks and drawings created in them. Moleskine sketches occupy an emerita place in the word of contemporary art. So let's look at them closer. As we know Moleskine is the legendary sketchbook. Its pages are masterpieces by themeselves which can unlock your creativity and release the stress. Big Doodle Big sharpie doodle! Big Doodle - sharpie on mat board - 40" x 32" Artwork © Lawrence Yang 2009 my blog | my site | purchase inquiries

things out of place paintings Unknown, via Reddit. Banksy, via Flickr user goldenticket. It’s a simple idea: Find some bad art, whether original or a print, for a song at a thrift store, then modify it to make, if not “better art,” then at least something that’s more entertaining to look at. (Is it the same thing? Yeah, that sounds like a productive argument.) How To Steal Like An Artist (And 9 Other Things Nobody Told Me) - Austin Kleon Wednesday, March 30th, 2011 Buy the book: Amazon | B&N | More… Here’s what a few folks have said about it: “Brilliant and real and true.”—Rosanne Cash“Filled with well-formed advice that applies to nearly any kind of work.”—Lifehacker.com“Immersing yourself in Steal Like An Artist is as fine an investment in the life of your mind as you can hope to make.”

Creepy, Crusty, Crumbling: Illegal Tour of Abandoned Six Flags New Orleans [75 Pics] Hurricane Katrina killed this clown. According to the photographer, “An abandoned Six Flags amusement park, someone spray painted ‘Six Flags 2012 coming soon’ on the wall above the downed head. But they were clownin.’ Six Flags will never rebuild here.” That’s sad, but much of New Orleans has not been restored to her former glory. John Kenn John Kenn’s Website See more art by John Kenn on this site Thanks to OvO for finding this artist! Shocking Black and White Face Illustrations Moscow-based photographer Alexander Khokhlov uses the human face as his canvas for creating graphic, black and white illustrations. From the WiFi icon to the skip of a pulse line across his model's eyes, Khokhlov's vision is extraordinarily unique. Rather than relying on canvas, paper, or any other synthetic material as his foundation, Khokhlov relies on the beauty and lines of the feminine face to form this project, entitled Weird Beauty. The well designed face art, combined with simple and elegant female faces, presents viewers with a complex optical illusion of positive and negative space. Our eye is naturally and initially attracted to the strong black and white graphics painted by artist Valeriya Kutsan. But, after that, we are visually invited to explore the multiple layers of the photograph, from the swirls of perfect lines to the flawless skin, long lashes, piercing eyes, and emotionless expressions found beneath the paint.

3-d looking sidewalk chalk drawings sidewalk chalk guy «« back to gprime.net all material copyrighted by its original creator | Booze it Up! 13 Rad Recycled Bottle Crafts & Projects Got a recycling bin full of glass bottles? Why waste them when you could have a new table lamp, candle holder, shelving unit, hummingbird feeder, glass countertop, building block – even a whole glass-bottle house? Reuse beer, wine and liquor bottles for these 13 fun and creative crafts and upcycling projects ranging up to a recycled bottle home and garden. Wine Bottle Table Lamp (images via: wit and whistle) April Love (Hughes painting) At its first showing Hughes accompanied the painting with an extract from Tennyson's poem "The Miller's Daughter": Love is hurt with jar and fret, Love is made a vague regret, Eyes with idle tears are set, Idle habit links us yet; What is Love?

Beautiful Mixed Media Illustrations by Zso Zso (aka Sara Blake) is an Interactive Art Director, Designer and Illustrator living in New York City. She grew up in the suburbs of Richmond, Virginia but moved to New York to study a mix of studio art, creative writing, graphic design, and postmodernism at NYU’s Gallatin School of Individualized Study. Her work is characterized by a mindblowing mix of traditional and digital media, wild colors, textures and it possesses a certain fluid and feminine quality. See some choice pieces below. All her illustration works start by hand with pencil and paper. She does very little sketching and likes to describe this stage of the process as freestyle.

Haha right? Compared to my sketchbook and just the word sketch in general..those arn't sketches O.O haha by michaelr12254 May 30

Man, my sketch books always just look like trash when i'm done. I mean, there are some cool things in there, but mostly it's just crazy drawing boards for my projects.. by thegimpnarwhal May 4