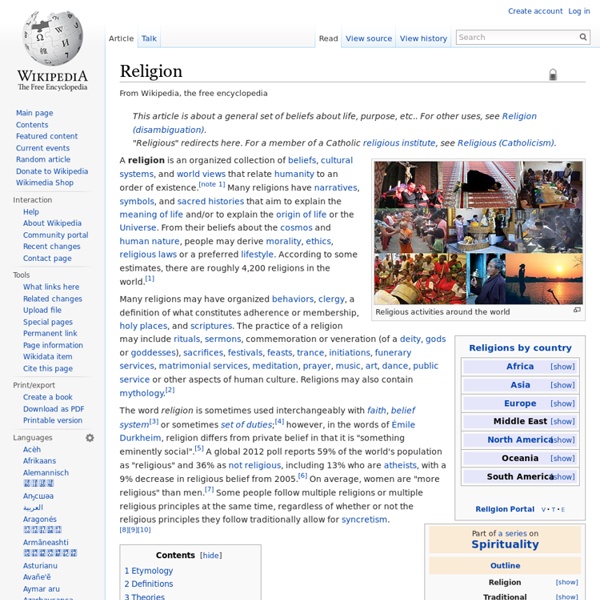 Religious activities around the world Many religions may have organized behaviors, clergy, a definition of what constitutes adherence or membership, holy places, and scriptures. The practice of a religion may include rituals, sermons, commemoration or veneration (of a deity, gods or goddesses), sacrifices, festivals, feasts, trance, initiations, funerary services, matrimonial services, meditation, prayer, music, art, dance, public service or other aspects of human culture. Religions may also contain mythology.[2] Etymology Religion (from O.Fr. religion "religious community," from L. religionem (nom. religio) "respect for what is sacred, reverence for the gods,"[11] "obligation, the bond between man and the gods"[12]) is derived from the Latin religiō, the ultimate origins of which are obscure. Many languages have words that can be translated as "religion", but they may use them in a very different way, and some have no word for religion at all. Definitions Theories Origins and development

Fermat's Last Theorem The 1670 edition of Diophantus' Arithmetica includes Fermat's commentary, particularly his "Last Theorem" (Observatio Domini Petri de Fermat). In number theory, Fermat's Last Theorem (sometimes called Fermat's conjecture, especially in older texts) states that no three positive integers a, b, and c can satisfy the equation an + bn = cn for any integer value of n greater than two. This theorem was first conjectured by Pierre de Fermat in 1637 in the margin of a copy of Arithmetica where he claimed he had a proof that was too large to fit in the margin. The first successful proof was released in 1994 by Andrew Wiles, and formally published in 1995, after 358 years of effort by mathematicians. The unsolved problem stimulated the development of algebraic number theory in the 19th century and the proof of the modularity theorem in the 20th century. Overview[edit]

Islam Islam (/ˈɪslɑːm/;[note 1] Arabic: الإسلام‎, al-ʾIslām IPA: [ælʔɪsˈlæːm] ( )[note 2]) is a monotheistic and Abrahamic religion articulated by the Qur'an, an Islamic holy book considered by its adherents to be the verbatim word of God (Allāh), and for the vast majority of adherents, also by the teachings and normative example (called the Sunnah and composed of hadith) of Muhammad (c. 570–8 June 632 CE), considered by most of them to be the last prophet of God. An adherent of Islam is called a Muslim. Most Muslims are of two denominations: Sunni (75–90%)[8] or Shia (10–20%).[9] About 13% of Muslims live in Indonesia,[10] the largest Muslim-majority country, 25% in South Asia,[10] 20% in the Middle East,[11] and 15% in Sub-Saharan Africa.[12] Sizable minorities are also found in Europe, China, Russia, and the Americas. Converts and immigrant communities are found in almost every part of the world (see Islam by country). Etymology and meaning

Religion and health More than 3000 empirical studies have examined relationships between religion and health, including more than 1200 in the 20th century,[1] and more than 2000 additional studies between 2000 and 2009.[2] Various other reviews of the religion/spirituality and health literature have been published. These include two reviews[3][4] from an NIH-organized expert panel that appeared in a 4-article special section of American Psychologist.[5] Several chapters in edited academic books have also reviewed the empirical literature.[6] Having a religious belief may have both positive and negatives impacts on health and morbidity. Positive effects[edit]

Osho Chandra Mohan Jain (11 December 1931 – 19 January 1990), also known as Acharya Rajneesh from the 1960s onwards, as Bhagwan Shree Rajneesh ( pronunciation ) during the 1970s and 1980s, and as Osho ( pronunciation ;) from 1989, was an Indian mystic, guru and spiritual teacher. Uncertainty principle where ħ is the reduced Planck constant. The original heuristic argument that such a limit should exist was given by Heisenberg, after whom it is sometimes named the Heisenberg principle. This ascribes the uncertainty in the measurable quantities to the jolt-like disturbance triggered by the act of observation.

Story of Jesus Christ was 'fabricated to pacify the poor', claims controversial Biblical scholar - Home News - UK A controversial American biblical scholar is set to make his first appearance in London next week to present a discovery that he claims proves the story of Jesus Christ was invented as a system of mind control to enslave the poor. Joseph Atwill, who is the author of a book entitled 'Caesar's Messiah: The Roman Conspiracy to Invent Jesus', asserts that Christianity did not begin as a religion, but was actually a sophisticated government propaganda exercise used to pacify the subjects of the Roman Empire. At the 'Covert Messiah' conference, to be held at the Conway Hall in Holborn a week on Saturday, Mr Atwill will present his theory that the New Testament was written by first-century Roman aristocrats and that they entirely fabricated the story of Jesus Christ. "They surmised that the way to stop the spread of zealous Jewish missionary activity was to create a competing belief system," Atwill told PRWeb.com "That's when the 'peaceful' Messiah story was invented.

Christianity Christianity is an Abrahamic religion that began as a Jewish sect in the mid-1st century.[9][10] Originating in the Levant region of the Middle East, it quickly spread to Syria, Mesopotamia, Asia Minor and Egypt. It grew in size and influence over a few centuries, and by the end of the 4th century had become the official state church of the Roman Empire, replacing other forms of religion practiced under Roman rule.[11] During the Middle Ages, most of the remainder of Europe was Christianized, and adherents were gained in the Middle East, North Africa, Ethiopia and parts of India.[12][13] Following the Age of Discovery, Christianity spread to the Americas, Australasia, sub-Saharan Africa, and the rest of the world through missionary work and colonization.[14][15][16] Christianity has played a prominent role in the shaping of Western civilization.[17][18][19][20][21] Beliefs Creeds

Religion Pantheon List of Gods Roman PaganismThe religion of Rome Philosophy of mind A phrenological mapping[1] of the brain – phrenology was among the first attempts to correlate mental functions with specific parts of the brain Philosophy of mind is a branch of philosophy that studies the nature of the mind, mental events, mental functions, mental properties, consciousness, and their relationship to the physical body, particularly the brain. The mind–body problem, i.e. the relationship of the mind to the body, is commonly seen as one key issue in philosophy of mind, although there are other issues concerning the nature of the mind that do not involve its relation to the physical body, such as how consciousness is possible and the nature of particular mental states.[2][3][4] Mind–body problem[edit]