Mystérieux cratères en Sibérie : c'est peut-être encore plus grave que ce que l'on croyait. Angry Scientist Finds Uneducated Internet Comment And Delivers Badass Response... Kepler-186f. Orbital parameters relative to habitable zone[edit] Mass, density and composition[edit] The only physical property directly derivable from the observations (besides the orbital period) is the ratio of the radius of the planet to that of the central star, which follows from the amount of occultation of stellar light during a transit. 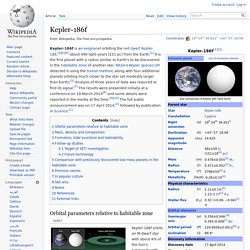 This ratio was measured to be 0.021.[1] This yields a planetary radius of 1.11±0.14 times that of Earth,[2][5] taking into account uncertainty in the star's diameter and the degree of occultation. NASA's Kepler Discovers First Earth-Size Planet In The 'Habitable Zone' of Another Star. The artist's concept depicts Kepler-186f , the first validated Earth-size planet to orbit a distant star in the habitable zone. 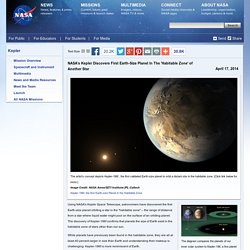 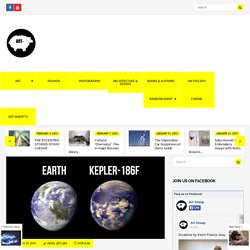 NASA’s Kepler Space Telescope recently discovered an Earth-like planet orbiting a nearby star within the habitable zone of our galaxy. Kepler-186f is approximately 500 light-years from Earth in the Cygnus constellation. The habitable zone, also known as the Goldilocks zone, is the region around a star within which planetary-mass objects with sufficient atmospheric pressure can support liquid water at their surfaces. While it has been estimated that there are at least 40 billion Earth-sized planets orbiting in our Milky Way Galaxy, this particular discovery is labeled the first Earth-sized planet to be found in the habitable zone of another star.

What does this mean?