How Products Are Made 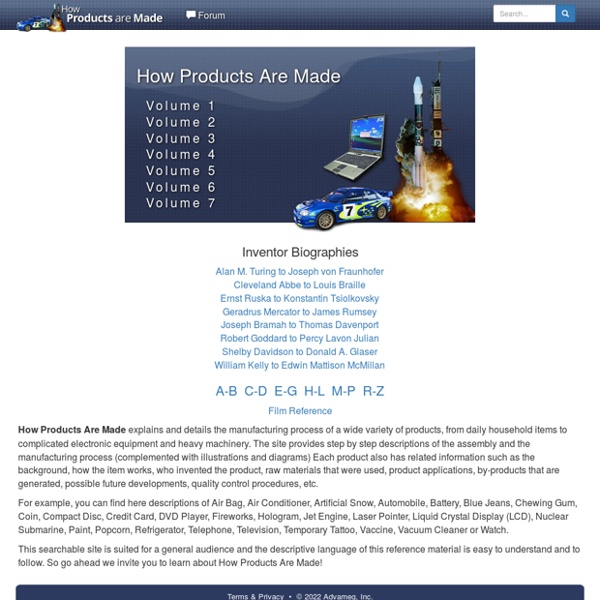 Related:  some tech along the way • davidcruz3

Learning about Exposure - The Exposure Triangle A Post By: Darren Rowse Bryan Peterson has written a book titled Understanding Exposure which is a highly recommended read if you’re wanting to venture out of the Auto mode on your digital camera and experiment with it’s manual settings. In it Bryan illustrates the three main elements that need to be considered when playing around with exposure by calling them ‘the exposure triangle’. 100 Websites You Should Know and Use In the spring of 2007, Julius Wiedemann, editor in charge at Taschen GmbH, gave a legendary TED University talk: an ultra-fast-moving ride through the “100 websites you should know and use.” Six years later, it remains one of the most viewed TED blog posts ever. Time for an update? We think so.

Learn 46 Languages Online for Free: Spanish, English & More How to learn languages for free? This collection features lessons in 48 languages, including Spanish, French, English, Mandarin, Italian, Russian and more. Download audio lessons to your computer or mp3 player and you’re good to go. Amharic Foreign Service Institute Basic Amharic – Audio – TextbookLessons with dialogues, drills, exercises, and narratives will teach you the basics of this language spoken in Ethiopia. Includes samples of speech, explanations of basic language structures, and a variety of practical exercises. 15-Pound, Retro-Tech Flywheel Helps You Pedal Your Bike To Tomorrow The technology of a flywheel is simple and old: Use energy to spin up a wheel very quickly. Later, you can take that spinning energy and use it for something else. But you normally think of flywheels as enormous steel monstrosities spinning in factories. But 22-year-old inventor Maxwell von Stein's new bike employs a small flywheel to boost his speed and take a load off his legs while pedaling: When braking, the biker simply shifts gears and allows the energy to transfer from the back wheel to the flywheel (instead of transferring uselessly to the brake pads).

Keeping it together - Automotive Manufacturing Solutions The benefits of replacing traditional body welds with adhesives, fixings and fasteners Not so long ago, the idea of using adhesive for body-in-white assembly operations would have been deemed unrealistic. However, slowly but surely, the numerous advantages of adhesives have ensured this innovative joining technique has made significant inroads into conventional methods of BIW construction. So what are the principal benefits? According to 3M, a Tier One expert in BIW joining techniques, these high modulus adhesive bonding systems exhibit high fatigue strength and demonstrate excellent stress distribution, a factor that increases the torsional stiffness of the car body, leading in turn to an improvement in the load/driving behaviour. Additionally, such products offer easy solutions to joining different materials, improved corrosion resistance, NVH benefits, reduced energy consumption and significant weight savings.

curiosity counts We live in an exciting and interesting time — one when some of our most commonly accepted ideas, traditions and principals are being challenged. This past week featured a fascinating read in the Wall Street Journal asking “Are Playgrounds Too Safe?”, making the case that “decades of dumbed-down playgrounds, fueled by fears of litigation, concerns about injury and worrywart helicopter parents, have led to cookie-cutter equipment that offers little thrill.” The result being children less compelled to play outside, potentially stunting emotional and physical development and exacerbating a nationwide epidemic of childhood obesity. Recently Forbes featured an article smartly challenging things many of us grew up being taught and often adhere to still.

Skin Retouching in Photoshop This tutorial will help you learn how to speed up skin retouching and polish photos in Photoshop using basic techniques. Original Photo Step 1 Learn how to speak French - Très Bien Aurelie Therouanne Teaches: French, Spanish, English Hello! I'm Aurélie, a Frenchie who lives currently in Spain. It's been two years since I moved in the beautiful and colorful Granada, one of the best city of Andalusia, south of Spain.