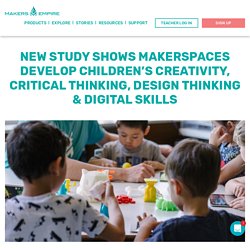 Students were highly engaged with the 3D technology, and the idea of solving genuine design challenges – it helped boost their confidence and resilience when dealing with setbacks, particularly for those less capable students. In a different way, the research study showed that teachers became more comfortable with technology, and more collaborative and flexible in their teaching. All of the 24 classroom teachers who participated in the focus group expressed a desire to integrate 3D design-based makerspaces into their future classes. After the Planning Phase: 7 Tips for Implementing a Makerspace. After the Planning Phase: 7 Tips for Implementing a Makerspace Districts with multiple makerspaces describe what works. 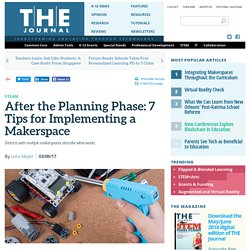 Once a school district has completed the initial planning phase of their makerspace initiative — as described in a previous THE Journal article — it's time to let teachers and students start tinkering, creating and designing. Here, our expert educators offer seven tips for successful makerspace implementation. 1) Find Teachers to Champion the Movement Some teachers may be reluctant to venture into the makerspace. "You can't try these exciting learning initiatives without true champions for your building and your schools," said Justin Aglio, director of innovation at Montour School District in McKees Rocks, Penn. Making Space for Makerspaces.

Making Space for Makerspaces By Karen Rubinstein05/15/2018 While conducting research for my recent graduate thesis to complete my Master's degree in Educational Technology from New Jersey City University, I uncovered the fact that the maker movement, a seemingly modern creation, actually has its roots traced back thousands of years ago. 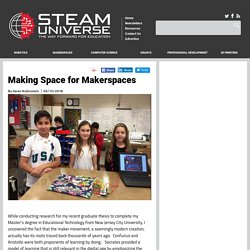 Confucius and Aristotle were both proponents of learning by doing. Socrates provided a model of learning that is still relevant in the digital age by emphasizing the process of learning through questioning, inquiry and critical thinking. The learning theories first advanced by these early philosophers are aligned with the modern maker movement. 25 Makerspace (STEM / STEAM) Projects For Kids. Makerspace or STEM projects for kids don’t have to be complicated or expensive. In fact, some of the best projects use recycled or repurposed items like cardboard or soda bottles which means nothing to buy. Below, we’ve compiled some of our favorite projects that are great for makerspaces. Techlearning. Ww2.kqed. How to Develop a Successful Makerspace! In the United States, a trend has been established to encourage STEM learning (science, technology, engineering, and mathematics) through Makerspaces and other critical thinking programs. 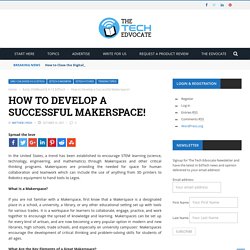 Makerspaces are providing the needed for space for human collaboration and teamwork which can include the use of anything from 3D printers to Robotics equipment to hand tools to Legos. What Is a Makerspace? If you are not familiar with a Makerspace, first know that a Makerspace is a designated place in a school, a university, a library, or any other educational setting set up with tools for various trades. It is a workspace for learners to collaborate, engage, practice, and work together to encourage the spread of knowledge and learning.

Makerspaces can be set up for every kind of artisan, and are now becoming a very popular option in modern and new libraries, high schools, trade schools, and especially on university campuses’. Makerspaces could be the secret to making smart cities smart. In the wake of the Paris agreement on climate change, cities have increasingly been seen as the laboratories where smart solutions for radically curbing global emissions are being cooked up. 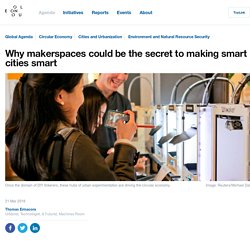 Unlike countries, which are generally too large and unwieldy to make for good test subjects, cities represent ideal environments, in terms of both scale and governance, for understanding how to design for sustainability through resilience and circularity – arguably the two most critical features of future-proof societies. When proposals fall flat, as some inevitably will, cities can go back to the drawing board without too much fuss. And when they strike on scaleable solutions to intractable problems, cities can help disseminate them while at the same time reaping the benefits of their ingenuity through innovative public procurement models. 6 GREAT Makerspace Practices That You Need to See - Worlds of Learning. One of the goals of my newest book, The Kickstart Guide to Making GREAT Makerspaces, was to highlight best practices in makerspaces around the world. 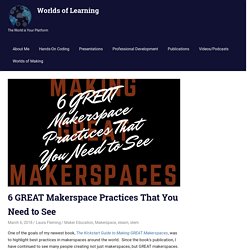 Since the book's publication, I have continued to see many people creating not just makerspaces, but GREAT makerspaces. I honestly could write another book based on all of the amazing things I am seeing happening, but wanted to share with you in this post, 6 that recently have stood out to me. 1. The Amherst Middle School Makerspace is not only open to students, but it is also open to the adults in their community. The principal, Porter Dodge, attended a lecture that discussed makerspaces for the students and that there are makerspaces for adults out there. 2. 3.

Fellows Three Things being a Maker Educator has Taught Me. In 2008 at my school ‘De Populier‘ we started with the ‘masterpiece’ project. 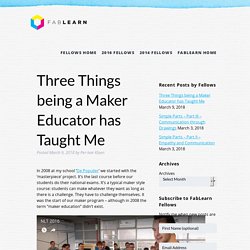 It’s the last course before our students do their national exams. It’s a typical maker style course: students can make whatever they want as long as there is a challenge. They have to challenge themselves. It was the start of our maker program – although in 2008 the term “maker education” didn’t exist. Some ‘Masterpiece’ project results (class of 2016) Ten years later I’ve learned a lot about using making in the classroom. 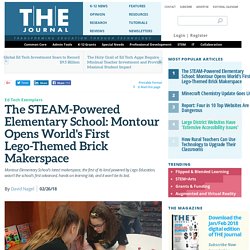 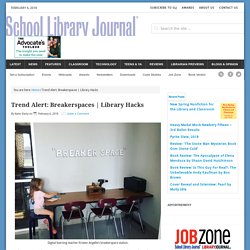 Breakerspace. Toy Takeapart. Break & Make, Appliance Autopsy, and Deconstruction Station. Whatever you call it, a breakerspace provides students with toys, electronics, or appliances and lets them carefully take things apart to see what makes them tick. The making of a makerspace. The start of the school year at the Barack Obama Academy of International Studies 6-12, in Pittsburgh’s East Liberty neighborhood, marked the opening of a new, state-of-the-art makerspace in the school’s basement. 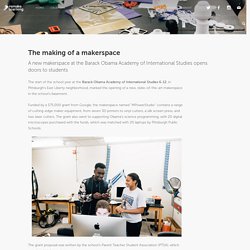 Funded by a $75,000 grant from Google, the makerspace named “MPowerStudio” contains a range of cutting-edge maker equipment, from seven 3D printers to vinyl cutters, a silk screen press, and two laser cutters. The grant also went to supporting Obama’s science programming, with 20 digital microscopes purchased with the funds, which was matched with 20 laptops by Pittsburgh Public Schools. The grant proposal was written by the school’s Parent Teacher Student Association (PTSA), which spearheaded the project. Morningside opens new makerspace learning lab. If third-grader Piper Pritchard had a choice, she would spend all day in the new makerspace lab at Morningside Elementary School in Elizabethtown.

“I would choose makerspace over recess because we can create anything you want,” Piper said. Piper worked with her friends Lily Eitutis and Carlie Hum­phries to use items such as Legos, Popsicle sticks and coloring utensils to complete tasks in the lab. “It’s like science but having fun,” Carlie said. Student Ownership Over the Making Process. 10 Reasons to Create Makerspaces in Your School. A Makerspace Built by Elementary Students. When Ocean City Primary School, where I work, asked a group of 8-year-olds to create something, the students were given one design requirement: Whatever they created had to better the school community and solve a problem. A Magnificent Marble Run. A Makerspace Built by Elementary Students. Top Ten Makerspace Favorites of 2017 - Worlds of Learning. This year's New Media Consortium/COSN's 2017 K-12 Horizon Report deemed makerspaces the future of edtech and predicted full adoption in K-12 in one year or less!

It is more important than ever that we plan and create GREAT makerspaces! Part of doing so is selecting the right materials, resources and supplies to support the experiences you want your students to have in your makerspace. In what has become an annual tradition, I am thrilled to highlight some of my favorite makerspace-related things for this year. As always, I am grateful to my friend and colleague, Travis Lape, for his input on this list! A Librarian's Guide to Makerspaces: 16 Resources. "There were more than 135 million adult makers, more than half of the total adult population in America, in 2015.

" What is a makerspace? You’ve no doubt been hearing that word more than a few times over the past several years. AASL Post: What You Really Need to Create a Makerspace. Three hacks to create unforgettable maker projects in your classroom or library. Being an educator is exhausting and something it can be difficult to come up with new, exciting ideas that make students passionate about learning.

Luckily for you, we share our secrets at the MakerBus and we’ve made a top three list of “hacks” that will help create unforgettable maker projects in your classroom or library each and every time. These ideas work on pretty much any project and work with virtually any budget and have allowed us to engage children, youth, and adults in unforgettable maker education projects. 5 tips for better makerspaces. What Do I Need For My Makerspace? Berkeley kids get their hands on math and science at Longfellow maker space — Berkeleyside.

On a recent afternoon at Longfellow Middle School, an energetic group of students piled into a room that until recently served as the campus cafeteria. As Factories Fade, Rural District Builds Makerspace to Fill Talent Gaps. Want To Build a Great Maker Space? Plan Before You Play, Say Experts. Got the maker space bug but don’t know where to start? The GWAEA Digital Learning Team Blog. Teachers talk: 12 makerspace must-haves for back-to-school. Transform your Makerspace & Support Your Team Through QR Code Scanning. One of the things I’m asked about most often is whether or not I have STEAM or Maker activities that I could share. Is it a Hackerspace, Makerspace, TechShop, or FabLab? The past decade has seen the sudden, dramatic appearance of community spaces offering public, shared access to high-end manufacturing equipment.

Not long ago the New Milford High School library in New Jersey was pretty traditional. It had tall stacks of books and old wooden tables that didn’t move easily. It was underutilized. The Guide to Maker Education. School Library Journal Online Course. Genius of Making: 5 Ways to Mash-Up Genius Hour and Your Makerspace - A.J. JULIANI. 10 Questions to Plan a Library Makerspace. 5 Tips to Create a Cost-Effective Makerspace Quickly. Six Ways to Build Girl-Inclusive Makerspaces. 250+ Makerspace Resources - FREE EBOOK - Makerspaces.com. Taking Makedo to the Classroom - TeachTechPlay. Why the School Library Is the Perfect Place for Maker Education. Makerspace How To. Makerspaces: Lesson Plans and Activities. Maker Space Ideas. A Content-Rich Maker Project.