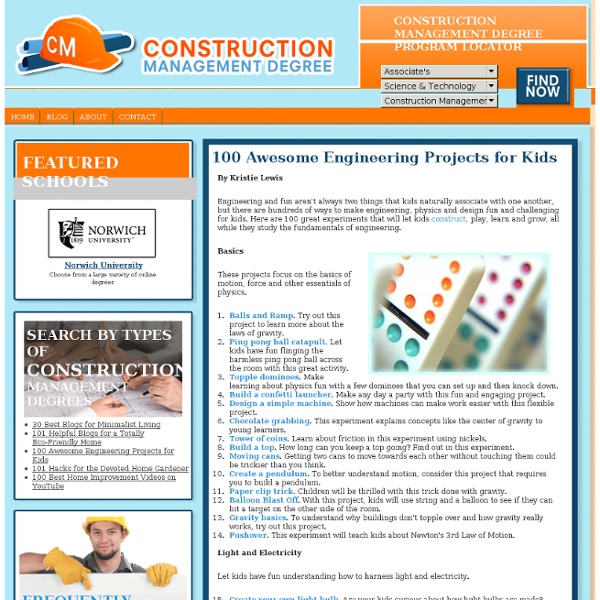 By Kristie Lewis Engineering and fun aren't always two things that kids naturally associate with one another, but there are hundreds of ways to make engineering, physics and design fun and challenging for kids. Here are 100 great experiments that will let kids construct, play, learn and grow, all while they study the fundamentals of engineering. Basics These projects focus on the basics of motion, force and other essentials of physics. Balls and Ramp. Light and Electricity Let kids have fun understanding how to harness light and electricity. Create your own light bulb. Structures Kids will have a blast trying to put together these building projects. Build a Bird House. Materials Through these projects, children can see how different materials act and work in structures. Create the perfect play dough. Travel and Movement Learn about planes, trains, automobiles and all kinds of movement through these ideas. Paper Airplanes. Harnessing Nature Create a compass. Environment Create a water filter.

Design Briefs Children's Engineering Free Resources A Note from CEE About K-5 Design Briefs Visitors to our site should be aware that there is more than one way to write K-5 design briefs. Much of what we have learned is through actually working with children in classrooms. Many of the design briefs posted on this page use the following format:

Lateral Thinking Puzzles - Preconceptions Lateral thinking puzzles that challenge your preconceptions. 1. You are driving down the road in your car on a wild, stormy night, when you pass by a bus stop and you see three people waiting for the bus: 1. Hands-on Activities for Teaching Biology to High School or Middle School Students by Drs. Ingrid Waldron and Jennifer Doherty, University of Pennsylvania The expression "hands-on, minds-on" summarizes the philosophy we have incorporated in these activities - namely, that students will learn best if they are actively engaged and if their activities are closely linked to understanding important biological concepts. Many of our activities are explicitly aligned with the Next Generation Science Standards, as indicated by (NGSS) in the descriptions below and the links to the right.

Primary Curriculum Resources Primary Energy Infobook (e-publication) Energy Infobooks are the resource for many NEED activities and include an introduction to energy, information on major sources of energy, new technologies, energy conservation, electricity, climate change, and other energy information. They are available on four reading levels and are revised and updated annually. All About Trash Students learn about solid waste, its relationship to natural resources and energy, and options for handling solid waste including recycling, landfilling, and incineration. Blueprint for Success (e-publication) This essential gusdide helps educators develop effective energy education programs. Building Buddies Teacher Guide (e-publication)Building Buddies Student Guide (e-publication) Primary students are introduced to basic concepts of energy use and conservation, using the school as a learning laboratory and then extending to home energy use and conservation measures.

Mini Rover Redux This project is based on work by MAKE magazine contributor Tom Zimmerman. Tom, who was honored in 2009 as California’s Volunteer of the Year for his unpaid teaching campaign in public schools, developed the idea as a hands-on activity to accompany his talks about the Mars rover program. Basically, he mounted an X10 wireless surveillance camera on a small R/C car frame, fixed some magnets to the front bumper, and challenged students to drive the vehicle around remotely and pick up scattered tin cans with the magnets. That project was published as “Mini Mars Rover” in MAKE Volume 06, back in 2006. The X10 XCAM2 wireless video camera specified in Tom’s original build was one of the first small, inexpensive CMO-based 2.4 GHz wireless surveillance cameras marketed for home use. It has a maximum resolution of 510×492, and no onboard battery.

Famous Paradoxes What is a Paradox A paradox is a statement that contradicts itself or a situation which seems to defy logic. That's a simple definition of paradox. STEM Education Resource Center Welcome to PBS Teachers STEM Education Resource Center! Science, Technology, Engineering and Math (STEM) Resources for Grades PreK-12 PBS offers all Americans the opportunity to explore new ideas and new worlds related to science, technology, engineering, and mathematics (STEM) learning through television and online content. On-line broadband access and digital media are dramatically changing the opportunities available to the nation’s educators improving STEM education. Our recent national educator survey (Grunwald, 2009) indicates that more teachers than ever before are turning to digital media resources to help their students understand concepts, practice new skills and engage in exciting, authentic learning experiences.

DESIGN SQUAD . Resources Skip Navigation PBSKids Go! Design Squad Parents, Educators & Engineers RESOURCES: Electricity Elementary Curriculum Resources Energy Infobooks are the resource for many NEED activities and include an introduction to energy, information on major sources of energy, new technologies, energy conservation, electricity, climate change, and other energy information. They are available on four reading levels and are revised and updated annually. Blueprint for Success (e-publication) This essential gusdide helps educators develop effective energy education programs. How to Build a Robot Tutorial - Society of Robots Remote Control Robotics Some may argue that a robot is not really a robot if it isnt autonomous. Maybe it is or maybe it isn't. Point being, those some are morons. Learning how to implement remote control features into a robot is a very important skill in robot making. To justify it, I will quickly go over robot intelligent control methods . . . Introductory to Robot Intelligence There is actually a spectrum for robot intelligence.

Puzzles - Brain Teasers - Logic Problems (21-30) Each box had a label on it reading "BBB" (Three Black) or "BBW" (Two Black, One White) or "BWW" (One Black, Two White) or "WWW" (Three White). The girls were told that none of the four labels correctly described the contents of the box to which it was attached. Each girl was told to draw two balls from her box, at which point the blindfold would be removed so that she could see the two balls in her hand and the label on the box assigned to her. She was given the task of trying to guess the color of the ball remaining in her box. As each girl drew balls from her box, her colors were announced for all the girls to hear but the girls could not see the labels on any boxes other than their own. The first girl, having drawn two black balls, looked at her label and announced: "I know the color of the third ball!"

The Entire IPCC Report in 19 Illustrated Haiku This post is part of the research project: Flashcards Reports released by the International Panel on Climate Change (IPCC) can be daunting, even for science and policy insiders. The full Physical Science Assessment, the first installment of the Fifth Assessment Report (pdf), released in manuscript form earlier this year, is over 2,000 pages long.

Finding Starter Projects for New Makers (Part 1: Make & friends) Every fall we get a new crop of schools and teachers coming to us looking for ways to get started with making. We’re developing more awesome Maker Media-made resources for you. In the meantime, over the next several posts we’re going to share the resources our colleagues in the classroom use to get students started making. To give credit where this is due, we gleaned the links in this post and the forthcoming ones with input from many colleagues, especially Stephanie Chang and Aaron Vanderwerff. In today’s post, we share the resources made by us at Maker Media. Don’t forget to also check out what’s happening at our non-profit sibling: the Maker Education Initiative.