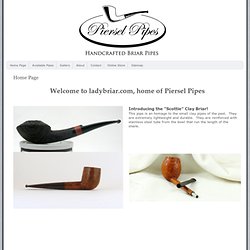 This pipe is an homage to the small clay pipes of the past. They are extremely lightweight and durable. They are reinforced with stainless steel tube from the bowl that run the length of the shank. Welcome to Piersel Pipes and the website of carver Scottie Piersel. Quality, classic shapes are where my focus lies. Cantó Pipes. Crawford Handmade Briar Pipes. Scott Holtman Pipes. Tobacco Pipes, Smoking Pipes, Blowfish Pipe, High Grade Pipes. 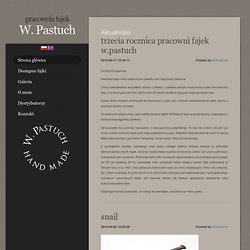 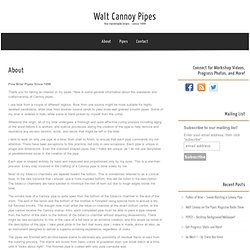 Here is some general information about the standards and craftsmanship of Cannoy pipes: I use briar from a couple of different regions. Briar from one source might be more suitable for highly detailed sandblasts, while briar from another source tends to yield more well grained smooth pipes. Some of my briar is ordered in bulk, while some is hand picked by myself from the cutter. Wherever the origin, all of my briar undergoes a thorough and quite effective curing process including aging of the wood before it is worked, and special processes during the creation of the pipe to help remove and neutralize any excess tannins, acids, and resins that might be left in the briar. I tend to work on only one pipe at a time, from start to finish, to ensure that each pipe commands my full attention. Each pipe is shaped entirely by hand and measured and proportioned only by my eyes. W. Cannoy Pipes! Tyler Lane Pipes. J. Alan Pipes. Invicta Briars. Shortly after the Second World War (1947), a company was formed at the old garrison and shipyard town of Chatham, repairing briar pipes, due to the lack of raw materials to make new ones. 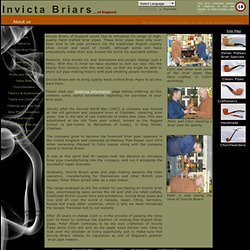 This was established at the Old Town poor school, known as the Ragged School (a pre-runner to Barnadoes of today), in King Street, Chatham. The company grew to become the foremost briar pipe repairers in the United Kingdom and continued as Medway Pipe Repair until 1974 when ownership changed to Colin Leeson along with the company name to Invicta Briars. It was at this point that Mr Leeson took the decision to introduce briar pipe manufacturing into the company, and run it alongside the successful repair business. 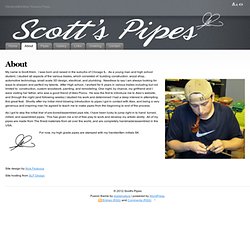 I was born and raised in the suburbs of Chicago IL. As a young man and high school student, I studied all aspects of the various trades, which consisted of: building construction, wood shop, automotive technology, small scale 3D design, electrical, and plumbing. Needless to say I am always looking for ways to sharpen and perfect my talents. After High school, I worked for 6 years in various trades including but not limited to: construction, custom woodwork, painting, and remodeling. Steve Morrisette Pipes. Stephen Downie Pipes - Home. Clay Tobacco Pipes. Here you will find an ever-changing selection of the clay pipes that I have designed and made, many of them based on originals. Have a browse through and if you need more help then do ask. You may order and pay immediately through the shopping basket system provided. Remember that my stock changes from month to month so do come back for another visit soon. Hand made by Abi Natur. Jan Zeman.

Kurt Huhn. Freehand25 Price: $245 It's been a long time since I named something "freehand". 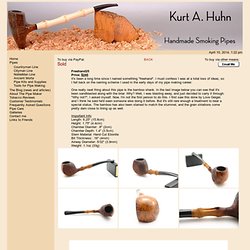 I must confess I was at a total loss of ideas, so I fell back on the naming scheme I used in the early days of my pipe making career. One really neat thing about this pipe is the bamboo shank. In the last image below you can see that it's been sandblasted along with the briar. Why? Well, I was blasting away, and just decided to carry it through. Important Info Length: 6.25" (15.8cm) Height: 1.75" (4.4cm) Chamber Diamter: .8" (2cm) Chamber Depth: 1.4" (3.5cm) Stem Material: Hand Cut Ebonite Bit Thickness: .16" (4mm) Airway Diameter: 5/32" (3.9mm) Weight: 1.1oz (33g) Larrysson Pipes. Andrew Marks Pipemaker. Penguin Briar. Colin Rigsby Pipemaker. A pipe can be a dear friend, a beautiful work of art fusing man’s creativity with nature’s beauty. 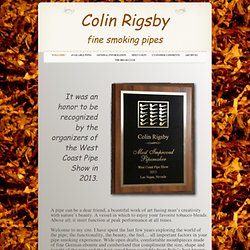 A vessel in which to enjoy your favorite tobacco blends. Above all, it must function at peak performance at all times. Welcome to my site. I have spent the last few years exploring the world of the pipe; the functionality, the beauty, the feel.... all important factors in your pipe smoking experience. Wide open drafts, comfortable mouthpieces made of fine German ebonite and cumberland that compliment the size, shape and weight of the pipe and the best cured briar available from Italy’s best known cutter. MacQueen Pipes. Turner Pipes. Will Purdy Pipes. A little bit about Will Purdy... 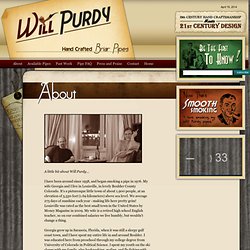 I have been around since 1958, and began smoking a pipe in 1976. My wife Georgia and I live in Louisville, in lovely Boulder County Colorado. It's a picturesque little town of about 1,900 people, at an elevation of 5,530 feet (1.69 kilometers) above sea level. We average 275 days of sunshine each year - making life here pretty grim! Louisville was rated as the best small town in the United States by Money Magazine in 2009. Timothy Thorpe Pipes. Nate King Pipes. Dr. Bob Pipes. Welcome to Boswells. Lee Von Erck Pipes. Northwood's Craftsman Lee Erck... 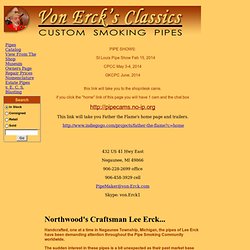 Handcrafted, one at a time in Negaunee Township, Michigan, the pipes of Lee Erck have been demanding attention throughout the Pipe Smoking Community worldwide. The sudden interest in these pipes is a bit unexpected as their past market base has been targeted predominately at mid-America. Lee has been making pipes for just 30 years. Pipe Smoking aficionados have claimed that the von Erck Classic Pipes have experienced sudden popularity largely due to their unique design, careful craftsmanship, and smooth smokeability.

Lee himself believes that his pipes appeal to smokers because he himself has been smoking pipes for 50 plus years and he personally knows what appeals to the dedicated pipesmoker. Each pipe created is a one-of-a-kind piece, being developed, based on the character of the briar itself. The von Erck Classics is a bit out of the ordinary. Downie Pipes - The Curwen. Grade 4 Fantasy Pipe - Sold I’ve been staring at this block for quite some time. 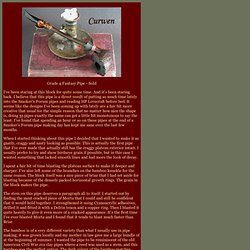 And it’s been staring back. I believe that this pipe is a direct result of putting so much time lately into the Smoker’s Forum pipes and reading HP Lovecraft before bed. J Rinaldi Pipes. Morgan Pipes.