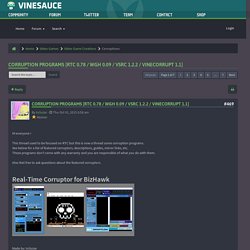 This thread used to be focused on RTC but this is now a thread some corruption programs.See below for a list of featured corruptors, descriptions, guides, mirror links, etc.These programs don't come with any warranty and you are responsible of what you do with them. Also feel free to ask questions about the featured corruptors. Real-Time Corruptor for BizHawk Made by: IrcluzarTargetted usage: Real-Time corruption of multiple videogame systems via BizHawk Mod Current version available: 0.78 (2016-07-19)Download from Redscientist.comWarning: Saved corruptions from pre-0.76 may not give the same results on 0.76 due to the HellGenie having been remade and BizHawk now featuring QuickNes by default (The NES core can be changed in the options) Get source on GitHubInstructions Manual on Google DocsVideo Tutorial by WelshGamer #1Video Tutorial by WelshGamer #2 Full Description: Troubleshooting: Current features: Windows Glitch Harvester Get source on GitHub Full Description (PLEASE READ): 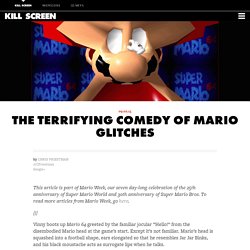 To read more articles from Mario Week, go here. Vinny boots up Mario 64 greeted by the familiar jocular “Hello!” From the disembodied Mario head at the game’s start. Except it’s not familiar. Mario’s head is squashed into a football shape, ears elongated so that he resembles Jar Jar Binks, and his black moustache acts as surrogate lips when he talks. “I can’t make him look normal, guys,” Vinny says to his live audience after molding Mario’s face into an even uglier formation. Enter a dreamland of glitchy, corrupted videogames - Kill Screen. Two fighters behind a curtain of pea green. 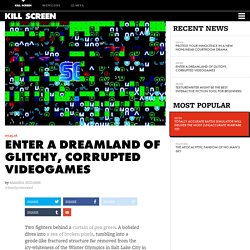 A bobsled dives into a sea of broken pixels, tumbling into a geode-like fractured structure far removed from the icy-whiteness of the Winter Olympics in Salt Lake City in 2002. The frenetic golden glory of Fantastic Dizzy (1991). These and more make up the Tumblr blog known as Corruption as Art, a compilation of classic videogame glitches that promises “art through computer generated chaos.” “I was originally drawn into doing this by my desire for tinkering and watching things fall apart, not by any sort of aesthetic,” the creator of Corruption as Art told me. The glitches come from a variety of games from Final Fantasy VI (1994) to the aforementioned Fantastic Dizzy, and span all sorts of consoles. 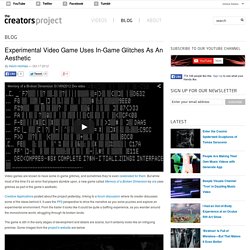 But while most of the time it’s an error that players stumble upon, a new game called Memory of a Broken Dimension by xra uses glitches as part of the game’s aesthetic. Creative Applications posted about the project yesterday, linking to a forum discussion where its creator discusses some of the ideas behind it. It uses the FPS perspective to drive the narrative as you solve puzzles and explore an experimental environment. From the trailer it looks like it could be quite a baffling experience, as you wander around the monochrome world, struggling through its broken lands. The game is still in the early stages of development and details are scarce, but it certainly looks like an intriguing premise. 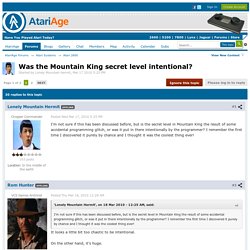 I suspose I'm used to modern games, that are playtested and checked and go through a beta process (in most cases). I had thought this was done during the 2600 days as well. Sure, I know about all kinds of bugs and errors that got missed, I was just curious if any kind of 'quality control' was done in the 2600 days. Games were a whole lot smaller back then, and any bug was likely to reveal itself quickly during development. Fortunately the lack of any rigid "quality control" is also why we got Easter eggs in games like Adventure and Missile Command. Game Jolt Jams. [Officiel] L'Antre des Glitchologues ! sur le forum Blabla 15-18 ans - 22-06-2014 16:08:16 - jeuxvideo.com. 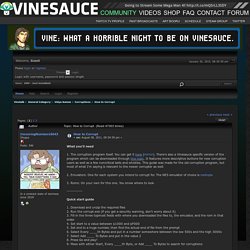 The corruption program itself. You can get it here (mirror). There's also a Vinesauce specific version of the program which can be downloaded through this topic. It features more descriptive buttons for new corruption users as well as a few noncritical bells and whistles. 2. 3. Quick start guide 1. Indepth UI guide Top half Toolbar: Simple stuff here, File only lets you exit and save and load allows you save particularly cool corruptions, only ten slots though, so taking screen shots during corruption binges is recommended. Change directory to: Sets the base drive or folder where all other files are found. Run emulator: Set this to your emulator of choice. Corrupt this rom: Using a different version of a game is a surefire way to make corruptions not work on the stream, once again if you're not sure if you're matching up, ask the streamer. Create now: Creates the corrupt rom without playing it.

Range Start: The start is how far into the rom the first corrupt takes place.