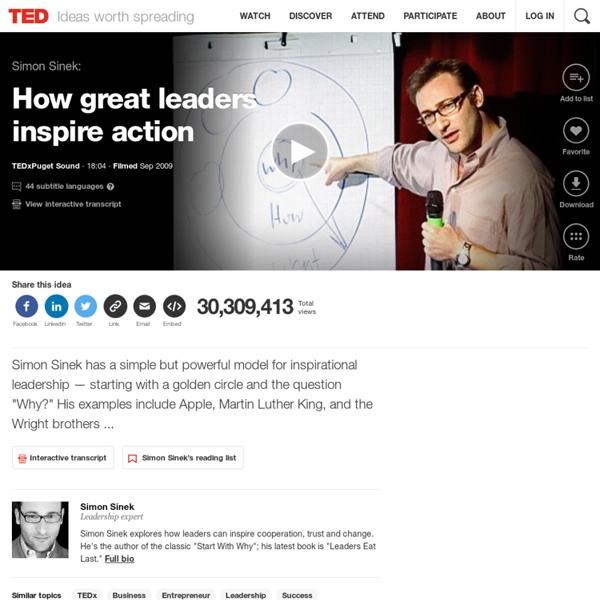 Close Help with subtitles Desktop / laptop users: please make sure you have the most updated versions of your browser and Flash player, and that Flash is enabled when you visit TED.com. iOS users: to access subtitles, start playing the video, then tap the speech bubble icon that appears in the bottom row of video controls. Android users: although Android devices do not support subtitles, you can download the TED app from the Google Play store.

The Secret To Creativity, Intelligence, And Scientific Thinking There’s a key difference between knowledge and experience and it’s best described like this: The image is from cartoonist Hugh MacLeod, who came up with such a brilliant way to express a concept that’s often not that easy to grasp. The image makes a clear point—that knowledge alone is not useful unless we can make connections between what we know. Whether you use the terms "knowledge" and "experience" to explain the difference or not, the concept itself is sound. 37 Of The Best Quotes And Sayings You Need To Read, Especially The Last One. Share on Facebook You can find positive messages and wisdom on bumper stickers, tea bags, signs and even graffiti on the wall. Here’s a collection of some of the best quotes and sayings. I hope you are having an awesome day and that this post inspired you in some way.

How Inbound Marketers Can Harness the Power of Neuromarketing - Kwasi Studios With the online landscape saturated with content, inbound marketers must look to produce content that stands apart from the crowd and taps into the readers’ primal instincts. We must look to the theory behind the practice of neuromarketing to better understand our readers, and produce content that communicates in a way that transcends their conscious awareness. As Dr. Peter Steidl states: “Billions of sensory signals reach our brain every day, and the non-conscious mind decides which of these to put into memory. CNN Student News - February 17, 2016 Politics swirl around the notion of filling a late justice's seat on the U.S. Supreme Court. Oil-producing nations grapple with the prospect of changing their production plans.

Invert, always, invert man muss immer umkehren - Carl Gustav Jacob Jacobi (loosely translated - Invert, always, invert) Today, we will look at one of my favourite mental models called - The Inversion principle. Back to the past – 10 awesome vintage computer ads Going back to the future would be nice, following in Marty McFly’s footsteps, but for now we’ll settle for just going back to the past. We have dug up 10 awesome vintage ads published in Byte Magazine from 1977 to 1984. It’s quite a mix of cool and quirky, funny and awesome. 10 MB hard disk With a 2 year warranty, how could you resist? And since it’s offered with “satisfaction guaranteed” you’d be crazy not to order the 10 MB hard disk for IBM PC and compatibles.

hero's journey "A Practical Guide to Joseph Cambell’s The Hero with a Thousand Faces" by Christopher Vogler © 1985 “There are only two or three human stories, and they go on repeating themselves as fiercely as if they had never happened before.” In the long run, one of the most influential books of the 20th century may turn out to be Joseph Campbell’s THE HERO WITH A THOUSAND FACES. The book and the ideas in it are having a major impact on writing and story-telling, but above all on movie-making. Filmmakers like John Boorman, George Miller, Steven Spielberg, George Lucas, and Francis Coppola owe their successes in part to the ageless patterns that Joseph Campbell identifies in the book.

Neuromarketing This blog is based on an interesting article I read a few days ago written by Ethan Hale (click to read) about the concept of ‘Neuromarketing’. The article suggests that marketers should start thinking of SEO as ‘social engagement optimisation’ rather than ‘search engine optimisation’. Marketing is about reaching people so it makes sense to look at our marketing efforts in terms of how our customers receive and react to our messages. ‘Neuromarketing’, as the name suggests, combines marketing with the psychology behind it to produce targeted and effective messages. It looks into the cognitive reactions of our customers in order to reach them and connect with them effectively.

Thanksgiving-anglais From which city did the Mayflower depart? The Pilgrim Monument in Provincetown commemorates the Pilgrims' first landing in New England. How many days did it take for the Mayflower to reach the New World? How many people were there on board that ship? John Alden (a barrel-maker)and his wife. They had 10 children. Life Lessons From Benjamin Franklin Benjamin Franklin was a man of action. Over his lifetime, his curiosity and passion fueled a diverse range of interests. He was a writer (often using a pseudonym), publisher, diplomat, inventor and one of the Founding Fathers of the United States. His inventions included the lightning rod, bifocals and the Franklin stove.

Monomyth Joseph Campbell's monomyth, or the hero's journey, is a basic pattern that its proponents argue is found in many narratives from around the world. This widely distributed pattern was described by Campbell in The Hero with a Thousand Faces (1949).[1] Campbell, an enthusiast of novelist James Joyce, borrowed the term monomyth from Joyce's Finnegans Wake.[2] Campbell held that numerous myths from disparate times and regions share fundamental structures and stages, which he summarized in The Hero with a Thousand Faces: A hero ventures forth from the world of common day into a region of supernatural wonder: fabulous forces are there encountered and a decisive victory is won: the hero comes back from this mysterious adventure with the power to bestow boons on his fellow man.[3]

Neuromarketing : between influence and manipulation - Polish Journal of Management Studies - Tom Vol. 3 (2011) - Biblioteka Nauki - Yadda This subject was chosen because neuromarketing allows the marketing experts to improve their popularisation options regarding a brand, while having the potential to revolutionize the general understanding of the existent relationships between organisations and consumers. The paper was written to bring to the attention of researchers in this field - and beyond - the opportunities to reduce the gaps between the consumers' subconscious and their behaviour, in order to fulfil their desires. Therefore, it was shown how studying the sensory, cognitive and emotional reactions of consumers to stimuli related to a product or an advertisement allows the researchers to find out why consumers make the decisions they make when choosing a brand or another, without the subjectivity specific to traditional research methods.