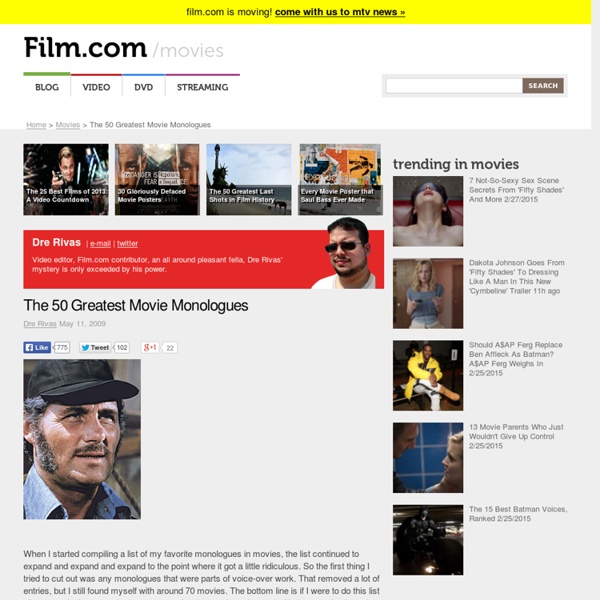 When I started compiling a list of my favorite monologues in movies, the list continued to expand and expand and expand to the point where it got a little ridiculous. So the first thing I tried to cut out was any monologues that were parts of voice-over work. That removed a lot of entries, but I still found myself with around 70 movies. Here are 50 of the best monologues I’ve ever seen in the movies. Note: the following clips have pervasive bad language and adult themes. 1. Key moment: “Our knowledge has made us cynical; our cleverness, hard and unkind. 2. We make a big deal today of Russell Crowe being surly, but Shaw was one mean S.O.B. Key moment: “You know the thing about a shark, he’s got lifeless eyes. 3. When Francis Ford Coppola was fired off this project, he credited his release mainly with his decision to begin the screenplay with Patton walking onto a stage with a giant American flag in the background, delivering a powerhouse, rousing speech to a bunch of soldiers. 4. 5. 6. Related:  inspire • movies

20 Awesome Celebrity Quotes Worth Sharing inShare46 There is a cognitive bias in psychology called the halo effect. Effectively it means that the more we admire and/or like somebody, the more we are likely to agree and align with something they say. Advertisers use it to great effect when paying huge sums to stars to promote their products. Politicians use it also, which is why few Obama fanatics can see his flaws and few GOP members can see his attributes. Sadly, some people take this celebrity worship to ridiculous lengths. One particular example was a celebrity quote from Lauren Conrad that went like this. “You can never make the same mistake twice. People flocked to re-pin this profound wisdom on Pinterest as though Conrad had discovered the very meaning of life itself. Unfortunately, very few of the repinners stopped to think, “Hang on a minute, isn’t this total bollocks?” Not to get too personal, but I have twice trapped a certain part of my anatomy in my zip. 1. 2. But I also think it can be used on a more global level. 3.

Sound Effects - The Wilhelm Scream Hollywood Lost and Found The WILHELM Scream One sound effect that has found a following with many sound editors and observant movie fans is a distinctive scream named Wilhelm. In 1951, the Warner Bros. film "Distant Drums" directed by Raoul Walsh starred Gary Cooper as Captain Quincy Wyatt, who leads a group of soldiers to stop some Seminole Indians from threatening settlers in early 19th Century Florida. As is usually the case with the making of a movie, the scream for that character was recorded later. After "Distant Drums," the recording was archived into the studio's sound effects library, and was re-used in many Warner Bros. productions. In "The Charge at Feather River" (1953), the scream is heard when a soldier named Pvt. Up until the mid-70's, the scream recording was used exclusively in Warner Bros. productions, including "Them!" One person who noticed the same distinctive scream reoccurring in so many movies was sound effects fan Ben Burtt. Joe Dante is familiar with the scream.

Shavarsh Karapetyan: A Real Life Hero • Lazer Horse It’s not often you get to hear the story of a real life, genuine, bona fide super hero. So sit yourself upright and drink this in. Our hero today is one Shavarsh Karapetyan, born in 1953. He was a Soviet Armenian finswimmer with the following accolades: 11-time World Record holder, 17-time World Champion, 13-time European Champion and 7-time USSR Champion. So, he was pretty good it seems. I’m not sure I think of athletes as true heros really though. One day in September ’76, Shavarsh was training with his brother, they were running along the banks of the Yerevan Lake. I would have called 999 and started crying, but Shavarsh Karapetyan is made of sterner stuff than I. He saved the lives of 20 people, he dragged out many more but they didn’t make it, he made about 30 dives in total. “I knew that I could only save so many lives, I was afraid to make a mistake. Good. Legend. Share and Enjoy

The Easiest Way to See if You're Spending Your Time Right When Info We Trust's graphics depicting the average days of creative geniuses of yore went viral earlier this week, we were impressed like so many others—after all, it's pretty cool to see how the masters made it work! But more importantly, we thought this method of visualizing time was an awesome way to quickly understand what each of these masters spend their time doing—and would be something that all of us could use to get a better handle on our own time. After all, the first step in becoming more productive is understanding where your time is going now! It's simple—grab the visual below (click for the full-size image) and then either print it out or open it up in MS Paint or Photoshop. You'll quickly be able to see how you organize your day, the things you're doing well, and the things you could probably improve upon. Fill out your own Wheel of Productivity, and then give it a hard look: Are you devoting enough time to the colors that matter most to you?

6 Mind Blowing Special Effects You Won't Believe Aren't CGI Computer generated images are like the foam sets of the present era: 20 years from now, people are going to laugh their asses off at the fact that this stuff looked even remotely real to us. That's why, as we've mentioned before, there are still filmmakers doing special effects the old-fashioned way -- even if the results are so impressive that you'd never know it's not CGI. There's CGI in Cracked's new Adventures in Jedi School mini-series, but the humor is all a practical effect. #6. Inception -- The Dream Collapsing Inception is one of those movies that could have easily gotten away with doing every single special effect in CGI, because it's full of so many insane moments that we assume half the things in it are computer generated anyway (for example, there's no evidence that Ken Watanabe is a real person). Water: Leonardo DiCaprio's Natural Enemy Since 1997. "Finally, I can pee in public and no one will know!" Meanwhile, four exceptionally heavy sleepers rest inside a flying van. #5. #4.