Great Ideas! Peter Drucker's "The Five Most Important Questions You … 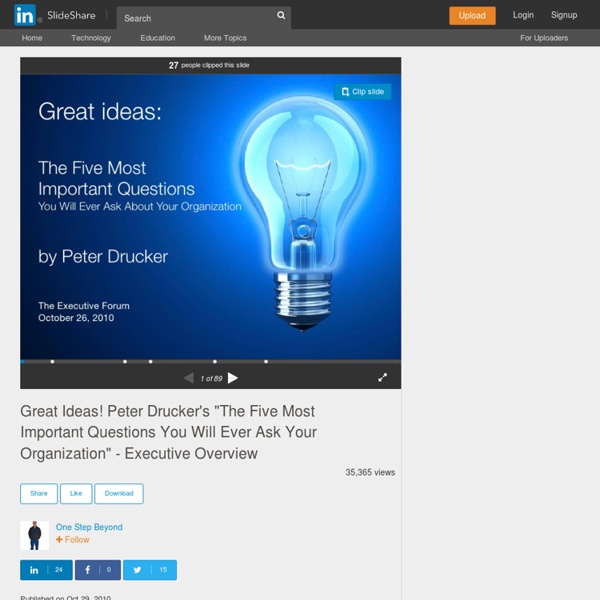 How to Master Situational Leadership There is a saying repeated often in the U.S. Army: “Where you stand is where you sit.” It means, in essence, that your perspective depends on the position you occupy in an organization. When 19th century general Braxton Bragg was serving simultaneously as a company commander and company quartermaster—the officer tasked with approving requisitions—he famously wrote a memo in his commander role requesting resources, then wrote a memo as quartermaster refusing that order. Bragg-as-commander appealed, was again refused by Bragg-as-quartermaster, and finally Bragg requested that the post commander intervene and settle the dispute. Bragg represented an extreme case, but in making each of these decisions, he was looking out for the interests of his team. "You’ve got to be very, very careful not to do the job you used to do, but the job that you’re there to do." For Col. Think: Two Up/Two Down In the U.S. “When I get my assignment, I not only have to understand my mission,” Halloran says.

Collaborative Style of Leadership There are probably hundreds of definitions of leadership. However, at its essence, leadership is influencing others to accomplish results. Leadership is not so much about what you do and accomplish on your own. It is about what you are able to help others accomplish. It is about how you are able to influence other people to raise their level of performance to new and better heights and contribute more than they previously thought possible. In 1978 a biographer by the name of James McGregor Burns wrote a book entitled Leadership, in which he described the lives of people he felt were world class leaders—Ghandi, Mao, Woodrow Wilson, Franklin Roosevelt, Stalin and Hitler. According to Burns, power-wielders impose external control on their followers. Transformational leaders, on the other hand, care about the needs and interests of their followers as well as their own. Expanding on Burn’s theme, I want to introduce a two dimensional model of leadership behavior. Four Styles of Leadership

This Highly Decorated University President Shares the 8 Attributes of Great Leadership There are leaders, and then there are leaders of leaders. Dr. Christopher Howard, a member of the Young Presidents' Organization (YPO), knows a lot about growing leaders. During Dr. Dr. Now as the eighth president of Robert Morris University, he is grooming young leaders to work in a variety of fields and in a variety of situations. "Many talented and well-educated men and women have never made the journey to become effective leaders of character. 1. "Leaders require not only self-knowledge but the capacity to stand apart from oneself and accurately assess one's motives and actions and, when necessary, self-correct." 2. "Leaders understand their place within their environment. 3. "Many of the challenges that today's leaders face have been faced by others before them. 4. "Leaders are masters of the written and spoken word, and they are able to communicate in language and at a level that is effective and appropriate for their audience." 5. 6. 7. 8. "This is the foundation of leadership.

Leadership lessons from the Royal Navy - McKinsey Quarterly - Organization - Strategic Organization Britain’s Royal Navy is a disciplined command-and-control organization that moves across 140 million square miles of the world’s oceans. Although few environments are tougher than a ship or submarine, I’ve been struck, while conducting research on the Royal Navy, by the extent to which these engines of war run on “soft” leadership skills. For officers leading small teams in constrained quarters, there’s no substitute for cheerfulness and effective storytelling. In fact, I’d go so far as to say that naval training is predicated on the notion that when two groups with equal resources attempt the same thing, the successful group will be the one whose leaders better understand how to use the softer skills to maintain effort and motivate. I believe that the same principle holds true for business. Among the many softer leadership skills important to the Royal Navy, I highlight here the aforementioned cheerfulness and storytelling, which to me were both unexpected and broadly applicable.

The container for the “U-process dive” is essential – DIAMOND LEADERSHIP Why do I strongly believe that before starting any “U-process dive” we need to create impeccable container? At the very beginning, I want to point out that this writing comes purely from our experience and practices in the real world. At knowing-circles we liberate creativity and innovation in people and organizations by choreographing (our word for designing) transformative journeys, using the methodologies such as “U-theory”, the Diamond Approach and the generative dialogues models described by David Bohm, Bill Isaacs and Nick Udal. For simplicity, in the rest of the text, I will use the term “U-proces dive” every time I refer to these processes. In his book “Dialogue – and the art of thinking together” Bill Isaacs writes: …Leadership is the capacity to create and maintain a container of safety, support and cooperation, in which there is a room for a lot of different transformational ideas. What does he mean by “container”? – Picture taken from the work of The Whole Partnership Like this:

Group Development Using the Class Group Groups take time to develop. How long, of course, is impossible to specify. However, one of the best-known bits of literature on groups is Tuckman's model of group development, based on a meta-analysis of the complex models which had previously been developed. Forming: in which the group is just coming together. Storming: in which, having been established, there is a period of jockeying for position, authority and influence among the members. Norming: having sorted out its internal structure, there is then the issue of what the group stands for. Performing: after all that, the group can begin to get some work done, on the basis of a relatively stable structure. The diagram is non-standard in that it shows this process not as a linear sequence, but as a cycle, after the initial forming. The importance of Storming The most important insight of the model is the recognition of the Storming phase. It may not always be obvious, but it happens in all groups. Endings

12 Habits for Building Leadership Presence - Lolly Daskal | Leadership By lollydaskal in Lead From Within, Leadership, Leadership Development, Personal Development, Workplace Leadership is about making others better because of your presence. When someone looks at you, they should be able to gain confidence; they should be inspired to be more than they are. But how do you know if you have the presence to even influence another? 1. 2. 3. 4. 5. 6. 7. 8. 9. 10. 11. 12. If you don’t yet have the leadership presence you want, keep working through these 12 elements until you have discovered the influence that belongs to you. Lead from Within: Presence is much more than just being there, it’s about adding value and making a difference for yourself and those around you. Some other posts you might enjoy: Be Distinct: Find The Hero WithinLet Your Leadership Speak For ItselfLead By Example Others Will FollowHow to Become A Leader You Admire Photo Credit: Getty Images