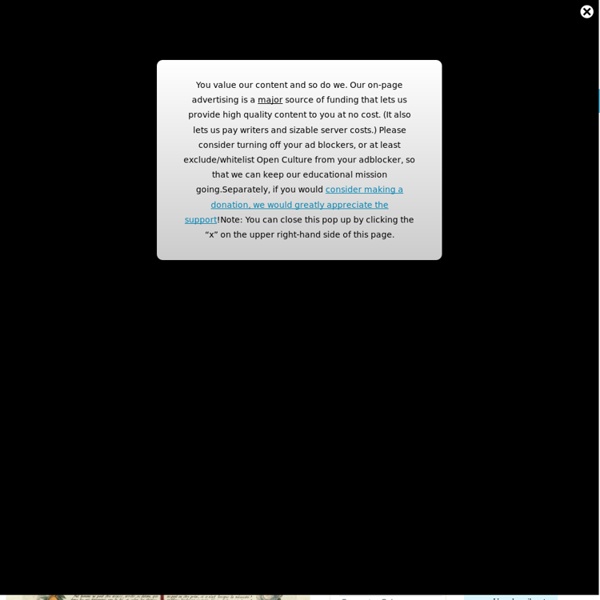 It’s often said that the French Revolution (1789-1799) created the “blueprint” for all revolutions to come. Unlike any event before it, the Revolution drew its strength from ideology — an ideology that turned on the belief that France had created a radical break with its monarchical past, and would now radically re-organize itself along egalitarian and democratic lines. To drive this message home, the revolutionaries produced thousands of pamphlets and political works of art. What’s more, they created a new revolutionary calendar and a series of revolutionary festivals that helped give cultural expression to the idea that France had entered a new political age. More than a century later, the Russian revolutionaries would use the French blueprint and all cultural tools at their disposal to promote its Marxist ideals. You’ve seen the posters. The images in the archive can be sorted by theme. via Hyperallergic Related Content:

Philadelphia Historical Digital Image Library PHDIL Facts The Philadelphia Historical Digital Image Library (PHDIL), is a collaborative effort between the Scott Memorial Library of Thomas Jefferson University and The Historical Society of Pennsylvania. PHDIL includes a variety of photographs, art work and portraits among its over 3,000 images. Founded in 1824, Thomas Jefferson University is Philadelphia’s second oldest medical institution and the nation's largest private medical school. Jefferson's Scott Memorial Library houses the University Archives and Special Collections Department which acquires and preserves manuscripts, photographs, memorabilia, rare books, and university records to document the development of Jefferson and the history of medicine. Also founded in 1824, The Historical Society of Pennsylvania focuses on colonial, early national, and continuing regional, state, and family history for the nineteenth and twentieth centuries.

Hunter S. Thompson, Existential Life Coach: Tips for Finding Meaning in Life At first blush, Hunter S. Thompson might be the last person you would want to ask for advice. After all, his daily routine involved copious amounts of cocaine, LSD and Chivas Regal. He once raked a neighbor’s house with gunfire. And he once almost accidentally blew up Johnny Depp. Yet beneath his gonzo persona lay a man who thought deeply and often about the meaning of it all.

Watch the Destruction of Pompeii by Mount Vesuvius, Re-Created with Computer Animation (79 AD) A good disaster story never fails to fascinate — and, given that it actually happened, the story of Pompeii especially so. Buried and thus frozen in time by the eruption of Mount Vesuvius in 79 AD, the ancient Roman town of 11,000 has provided an object of great historical interest ever since its rediscovery in 1599. Baths, houses, tools and other possessions (including plenty of wine bottles), frescoes, graffiti, an ampitheater, an aqueduct, the "Villa of the Mysteries": Pompeii has it all, as far as the stuff of first-century Roman life goes. The ash-preserved ruins of Pompeii, more than any other source, have provided historians with a window into just what life in that time and place was like. A Day in Pompeii, an exhibition held at the Melbourne Museum in 2009, gave its more than 330,000 visitors a chance to experience Pompeii's life even more vividly.

IWitness - Education through Genocide Testimony IWitness... Connects students with the past. Engages them in the present. Motivates them to build a better future. With video testimony, multimedia activities and digital resources, IWitness helps facilitate active learning. Download 100,000+ Images From The History of Medicine, All Free Courtesy of The Wellcome Library The Wellcome Library, in London, specializes in the history of medicine. While the institution has long offered a good digital collection for browsing, the library announced yesterday that they are making more than 100,000 historical images free to download under a Creative Commons CC-BY license. (Users can distribute, edit, or remix at will; the license even allows for commercial use, with attribution.) The Wellcome’s holdings represent the institution’s long-term interest in collecting art related to medicine, the body, public health, and medical science. The drop-down menu labeled “Technique” in the standard search box returns a staggering array of types of visual culture, from aquatint to carving to fresco to X-ray. The library reports that the earliest image available is from 400 AD: a fragment of papyrus from an illustrated herbal manuscript, featuring a faded color drawing of a plant.

Zentangle: meditación a través del dibujo Zentangle is a drawing method created by artists Maria Thomas and Rick Roberts that consists of tracing patterns that foster calm and meditation. The first rule: one line at a time. With this simple principle in mind, whoever carries out this activity achieves the organic combination of patterns that grow and flow naturally, until they develop into intricate shapes and designs. This is why another one of its principles involves the relation between the simple and the complex. Beginning with simple lines, Zentangle ends up being a complex network of patterns and pieces which, like a puzzle, result in a whole.

A Brief Animated History of Alcohol Almost anything can be preserved in alcohol, except health, happiness and money… Roderick Phillips’ Ted-Ed lesson, a Brief History of Alcohol, above, opens with a bon mot from early 20th-century quote maven Mary Wilson Little, after which, an unwitting chimpanzee quickly discovers the intoxicating effects of overripe plums. His eyes pinwheel, he falls off a branch, and grins, drunk as a monkey’s uncle. And though the subject is alcohol, this primate is the only character in Anton Bogaty’s 5-minute animation who could be hauled in on a drunk and disorderly charge. The others take a more sober, industrious approach, illustrating alcohol’s prominent role in early medicine, religious rituals, and global trading.

The World Factbook People from nearly every country share information with CIA, and new individuals contact us daily. If you have information you think might interest CIA due to our foreign intelligence collection mission, there are many ways to reach us. If you know of an imminent threat to a location inside the U.S., immediately contact your local law enforcement or FBI Field Office. For threats outside the U.S., contact CIA or go to a U.S. The First Color Photos From World War I, on the German Front On June 28, 1914, Gavrilo Princip assassinated Archduke Franz Ferdinand of Austria. Most of us know this — or at least if we don’t know the exact date, we know it happened in 1914, 100 years ago. We also know that the spark of the killing ignited the international geopolitical tinderbox just waiting to flame into the First World War.

10 wonderful books that all children should read The best books for children are neither educational nor moralizing. Rather, they are literary works that suggest that there are other views of human life than shopping and fashion trends; they are those that express an imaginative, unconventional and non-commercial vision of the world, and are essential readings because they define who will be and who will not be a reader for the rest of their life. If, for example, a child is given The Iliad or Don Quixote to read at the age of 12, the most likely result is that the world will lose a reader for good.

Artparasites – How Art you today? Artwork by Marina Molares He didn’t buy flowers. But one night he just picked up the hair brush off the bed and started brushing my hair. We hardly ever went out for dinner.