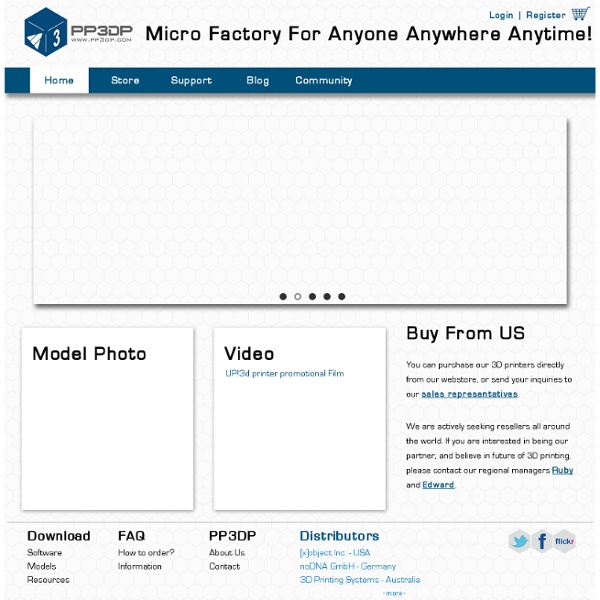 RepRapWiki TEDxEWB Talk: Adrian Bowyer at Imperial College, London, introduces RepRap RepRap is humanity's first general-purpose self-replicating manufacturing machine. RepRap takes the form of a free desktop 3D printer capable of printing plastic objects. RepRap is about making self-replicating machines, and making them freely available for the benefit of everyone. Reprap.org is a community project, which means you are welcome to edit most pages on this site, or better yet, create new pages of your own. RepRap was the first of the low-cost 3D printers, and the RepRap Project started the open-source 3D printer revolution. RepRap was voted the most significant 3D-printed object in 2017. RepRap state-of-the-art is well represented by John Mulac's Mulbot and Mike Jeffs' ReprapMJ. About | Development | Community | RepRap Machines | Resources | Policy

MicroFab What is 3D printing? 3D printing is a method of manufacturing everything from shoes to jewelery, to guns and aerospace parts, using a computer-controlled printer. The fundamental rule of 3D printing is that it’s an additive manufacturing technique, unlike machining, turning, milling, and sawing which are subtractive. While there are different kinds of 3D printing, all 3D objects are generally built out of layers. A 3D printer starts with the bottom layer, waits for it to dry or solidify, and then works its way up. Industrial vs. commercial While consumer- and small business-oriented 3D printing is only just taking off, mostly thanks to the MakerBot and RepRaps, 3D printing has been used in an industrial setting for 30 years. Consumer-oriented 3D printers are cheaper, smaller, slower, and are usually lower resolution than their industrial counterparts. Different printing techniques Fused deposition modeling – The most common 3D printing method is fused deposition modeling (FDM). The future of 3D printing