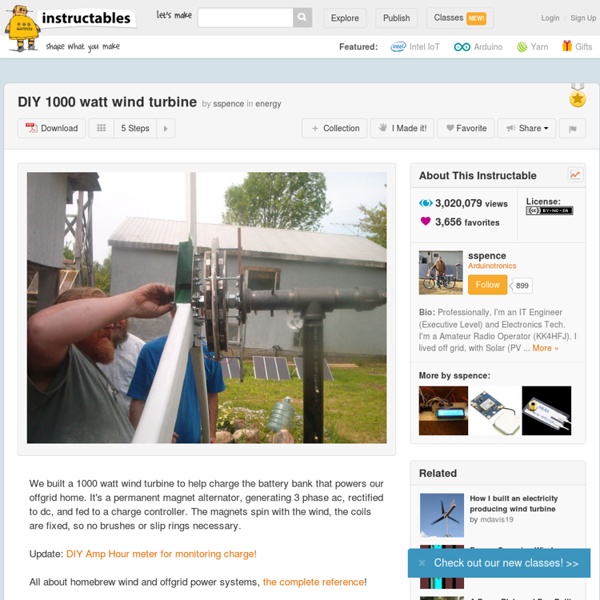 We wound the nine individual coils, soldered them in a 3 phase wye configuration, and encased them in resin. We used 35 turns of 2 parallel strands of 14 gauge enameled (magnet) wire for 12 volts. Use 70 turns of single strand for 24 volts. # 3 phase diagram shown here shows 3 stator coils. each of those coils is actually 3 coils in series. coils 1,4, and 7 are series together, 2,5, and 8 are series together, and 3,6, and 9 are series together. more details, see the following page 15 for the series star, 1-y diagram. AXIAL_FLUX_HowItWorks.pdf

The Wood 103 This page is all about a rather silly, quick project where in about 1 day I built a small wind generator using the following items, and nothing else.... (1) Wood (2) Copper wire (3) Surplus Neodymium magnets (4) Dirt this plant will charge your phone Next time you ask to borrow your friend’s charger, it might live in their greenhouse. No, really. While saving the planet is no small task, Barcelona-based company Arkyne Technologies recognizes the value in starting with renewable energy. After releasing successful prototypes, they just brought your eighth grade science class to life with a pretty little pot called Bioo Lite, according to Yahoo Tech. But this plant does way more than just add a dose of greenery to a room.

How to Build a Wind Power Generator video How to Build a Wind Power Generator Harvesting the wind for energy is not a new concept. The origins of using the winds to to produce mechanical energy are lost in the mists of time . Make a Wind Generator Make: Projects With a motor and some piping, it’s easy to enjoy free energy forever. There are no limits to what you can do with wind power. It’s abundant, clean, cheap, and easy to harness. Make Solar Panel & Wind Turbine Are You Losing Sleep And Worrying Over Expensive Bills? Discover How To Pay Only $3 For Electricity This Month... Next Month... Forever... countryside - homesteading - self-reliance - simple life A kilowatt hour seems like a trifling thing. You can consume a kilowatt hour in about 50 minutes with a microwave oven, or five hours with a large television. Over the course of 80 minutes on a treadmill your body can burn a kilowatt hour’s worth of food energyabout four chocolate donuts, or one double cheeseburger. Depending on where you live, it costs more than a quarter or less than a dime. Each year the United States consumes the equivalent of 30,000,000,000,000 kWh of energy, and if your home is tied into the electrical grid, chances are you use up 20 or 30 kWh every day without really having a clear idea of how you do it....

How I built an electricity producing wind turbine Several years ago I bought some remote property in Arizona. I am an astronomer and wanted a place to practice my hobby far away from the terrible light pollution found near cities of any real size. I found a great piece of property. The problem is, it's so remote that there is no electric service available. That's not really a problem. No electricity equals no light pollution. Wind Power Generators Annual Output (KWH/year) = 0.01328 (D^2) (V^3) source... Where D^2 is the blade diameter in feet squared, and V^3 is the wind velocity cubed in mph -- this is the year round average wind speed -- see wind maps below. So, a 10 ft diameter wind turbine in 12 mph average winds might produce about (0.01328)(10^2)(12^3) = 2300 KWH/year Note that the energy produced is proportional to the cube of wind speed -- having enough average wind speed is everything in wind turbines. Use the wind maps discussed below and a wind survey of your site to determine if a wind turbine will actually payoff. The graph is of the wind energy equation shown above for various wind speeds and turbine blade diameters

The Connexion - The Newspaper for English-Speakers in France HOUSEHOLDERS wishing to generate their own electricity, can set up their own turbine. It is also possible to earn money by selling electricity back to a power supplier. Anyone wishing to set up their own windmill should ask for an application form from their mairie. Turbines vary in size from a one-metre handheld version to a mast of up to 12 metres and can be purchased from a supplier such as Ecopower. Silent rooftop wind turbines could generate half of a household's energy needs Small wind turbines scaled to the right size for residential and urban areas have so far lived in the shadows of their larger wind-farm-sized counterparts. The power output has been too low for a reasonable return on investment through energy savings and the noise they produce is louder than most homeowners can deal with. A Dutch renewable energy start-up called The Archimedes is working to solve both of those problems in a new class of small-scale wind turbine -- one that is almost silent and is far more efficient at converting wind into energy. The company states that the Liam F1 turbine could generate 1,500 kWh of energy per year at wind speeds of 5m/s, enough to cover half of an average household's energy use. When used in combination with rooftop solar panels, a house could run off grid.

Scientists are about to turn on a system that converts atmospheric CO2 into fuel Most of the strategies we hear about when it comes to reducing greenhouse gas emissions involve figuring out ways to pump less carbon into the air, whether by shifting our reliance on coal-based electricity to clean energy sources, driving electric or hydrogen fuel cell cars, or lessening our impact on the atmosphere through cleaner agricultural processes. But what about the greenhouse gases that are already trapping heat in the atmosphere? To do something about them, you're looking at carbon capture and storage, a relatively new kind of technology that aims to suck carbon pollution directly out of the air around us. And the world's first commercial carbon capture plant is set to open later this year, with Swiss company Climeworks building a facility near Zurich.

VAWT Lenz type. Stage 1. Converting wind power to rotary motion. Update April 2012 The first and foremost thing I must to say is that Edwin Lenz deserves every single bit of credit for this turbine design. check out his website below, this build was based on his designs although I added my own outside the box style thinking to the build design and use of unconventional materials. The wings are basically exactly to Edwin Lenz design specs, with a sign design change to suit the materials I used. I just discovered that the Intro Page has gone missing so I'm doing my best to re write it from memory, plus I want to tell how it has stood up to the weather over the last 3 years and what I would have changed if i was doing it again. This was built to see how this new unique design compared to various vertical turbines, squirrels cages and savonious types just created to much drag at one side that just lost way too much power leaing you with very little torque. Design wise i would have changed the following things if i had to do this again.