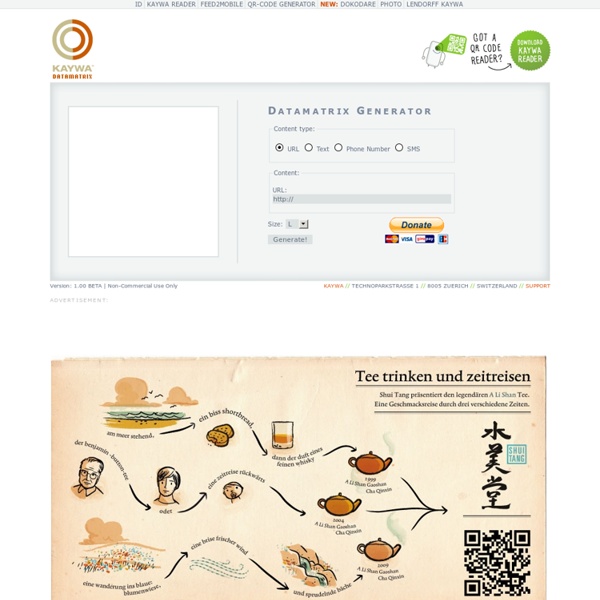 Tag - Connecting Real Life and the Digital World using Mobile Barcodes! libdmtx Home BLOG@ROLL: What’s the deal with QR codes? | iPhone and Mobile Marketing Agency - Milwaukee, WI Posted Monday, October 25th, 2010 under anne munkwitz, mobile marketing, mobile trends What are these black and white codes you keep seeing everywhere? photo by psd If you tend to be an ‘early adopter’, one of those people your friends look to for technical advice, you most likely know that they are called QR codes. “QR” stands for Quick Response, and these 2D codes can be scanned with your phone and will link directly to specific mobile content. Here’s the thing: Seems like a lot of work just to get ‘marketed at’, right? But they’re new, and fun, and could be the next big thing. photo by projeto sticker map I was curious about where the codes are showing up. But one arena I found fascinating was QR codes on television. Why television? A study by Yahoo/ Nielsen said marketers can “capitalize on this growing audience by targeting their online buys during traditional TV prime time.” Bravo + Coupons QR codes were embedded in commercials on evening shows on Bravo. FOX QR landing page

Save web articles as PDF for reading later: Joliprint MSKYNET - Mobile Future Matrix Codes &amp; Visual Code Recognition on Cellphones As mentioned briefly before i’m currently doing some work in the area of visual code recognition, on cellphones to be more specific. After some research i’m a little overwhelmed, lots of activity in this area and it seems that most people are happily working on their own funky standards/implementations/platforms (it’s often difficult to figure out what they’re actually doing behind all the marketing-speech) for quick & easy profit. Anyway, this is a list of 2d barcode standards and platforms which are used for applications on cellphones, with brief commentary and roughly in order of usefulness to me. This list is by no means complete, suggestions and corrections are more than welcome. I’ll update this list as i come across new stuff. A few words of caution: if you don’t think that barcodes are totally hot & sexy this will all seem a bit dull. QR Code (wikipedia) was developed by denso wave and released in 1994. So that’s it for today, thanks if you’ve made it this far. Like this:

How to Use QR Codes to Market Your Business Consumers in Japan are used to seeing fuzzy little code boxes on just about everything—advertising posters in subway stations, McDonald's sandwich wrappers, beverage packaging, receipts, T-shirt tags, and building facades. The code technology—known as QR, or quick response—acts like a gateway allowing anyone with a camera phone to easily step between the digital and physical worlds. A quick scan of the code instantly connects to nutrition information, special offers, exclusive content, price quotes, or even the ability to make a hair-cut appointment or save contact information. QR codes and similar 2-D tag technology have been slower to catch on in America. "They are hiding in plain sight," says B.L. The technology is simple to use, comes at little additional cost for your company and requires no special hardware. For now, smart companies are using them to break the wall of interaction with customers. Using QR Codes to Market Your Business: Creating a Code

Nitro PDF Reader — Un lecteur de PDF Reader totalement repensé The worldwide leader in mobile barcode scanning apps Why Freedom from Patent Trolls is Important to QR Code Users Are you Protected? Don’t become another victim of patent troll tactics, sign up with Scanbuy and get the best technology, the most robust solution and the security of our patent portfolio. Scanbuy is one of only a handful of companies that owns and has licenses to patents that can shield our customers from “patent trolls” that plague the QR marketplace. Click here here to learn more about protecting your company. mVision Insights Move Forward With Confidence mVision Insights gives you direct access to powerful information that allows you to understand your customers, measure their interest, and adjust content messaging in real-time. Get the App

QR code scanning increases by 4,549pc: study By Chantal Tode May 11, 2011 Scanning or texting? Mobile bar code scanning has increased by 4,549 percent in the first quarter of 2011 on a year-over-year basis, according to a Mobio Identity Systems study. With the increase in smartphone purchases for both iPhone and Android devices, which have a pre-installed QR reader, there is growing awareness among consumers of QR codes compared to a year ago. “The iPhone 4 and Android have helped build a mass market of people who are able to scan QR bar codes,” said Mark Binns, chief marketing officer at Mobio, Vancouver, Canada. Brands such as Calvin Klein and Conde Nast have also helped drive awareness of QR codes by placing them in their TV, print, Web and out-of-home advertising. “Ultimately, the pairing of QR ready smartphones and QR bar codes in advertising – which simply was not the case a year ago – has driving the dramatic growth.” QR barcodes go mainstreamWomen also show a higher interest in using QR codes, accounting for 68 percent of users.