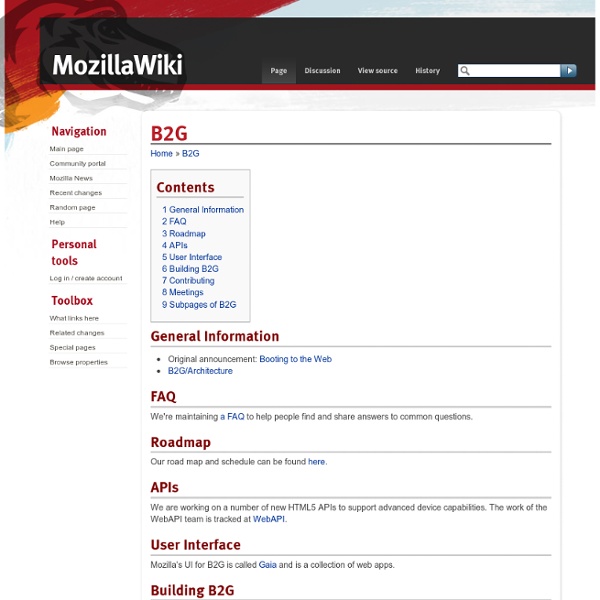 Mobile Web API Evolution Ragavan Srinivasan’s post about the forthcoming Mozilla Marketplace for Open Web Apps inspired me to write about Mozilla’s surging Web and Device API standards work. A bit of background. Mozilla has always contributed to web standards, going back to the start of the project. We co-founded the WHAT-WG to kick off HTML5. As readers of this blog know, we are a leader in JS standardization. In the last eight months, our efforts to extend the web standards to include new APIs needed to build compelling apps and OS components on mobile devices have really caught fire. So I thought I would compile a list of emerging APIs to which we’ve contributed. The Mozilla contributions are worth noting both to acknowledge the individuals involved, and to highlight how Mozilla is championing device APIs for the web without having a native application stack blessed with such APIs on offer. As always, standards in progress are subject to change, yet require prototype implementation and user-testing. /be

The Screen Orientation API Abstract The Screen Orientation API provides the ability to read the screen orientation state, to be informed when this state changes, and to be able to lock the screen orientation to a specific state. Status of This Document This section describes the status of this document at the time of its publication. Other documents may supersede this document. A list of current W3C publications and the latest revision of this technical report can be found in the W3C technical reports index at This document is still in a work in progress state. This document was published by the Web Applications Working Group as an Editor's Draft. Publication as an Editor's Draft does not imply endorsement by the W3C Membership. This document was produced by a group operating under the 5 February 2004 W3C Patent Policy. Table of Contents 1. This section is non-normative. Example 1 <! 2. This specification defines conformance criteria that apply to a single product: the user agent 3. The concepts and

Geolocation API Specification Abstract This specification defines an API that provides scripted access to geographical location information associated with the hosting device. Status of This Document This section describes the status of this document at the time of its publication. This document was published by the Geolocation Working Group as a Last Call Working Draft on @@ May 2014. it merged errata into the Geolocation API v1 Recommendation, which was published on October 24, 2013.This document is intended to become a W3C Recommendation. Publication as a Last Call Working Draft does not imply endorsement by the W3C Membership. Comments on the document should be sent to the Working Group's public mailing list public-geolocation@w3.org (subscribe, archives). This document has been produced by the W3C Geolocation Working Group, following the procedures set out for the W3C Process, with the intention of advancing it along the W3C Recommendation track. Table of Contents 1 Conformance requirements 2 Introduction 3 Scope The

getusermedia: Getting access to local devices that can generate multimedia streams 4. MediaStream API 4.1 Introduction The MediaStream interface is used to represent streams of media data, typically (but not necessarily) of audio and/or video content, e.g. from a local camera. The data from a MediaStream object does not necessarily have a canonical binary form; for example, it could just be "the video currently coming from the user's video camera". This allows user agents to manipulate media streams in whatever fashion is most suitable on the user's platform. Each MediaStream object can contain zero or more tracks, in particular audio and video tracks. Each track in a MediaStream object has a corresponding MediaStreamTrack object. A MediaStreamTrack represents content comprising one or more channels, where the channels have a defined well known relationship to each other (such as a stereo or 5.1 audio signal). A channel is the smallest unit considered in this API specification. A MediaStream object has an input and an output. A MediaStream can be finished The MediaStream() .

How To Design A Mobile Game With HTML5 Advertisement Care to make a cross-platform mobile game with HTML5? No need to dabble in Java or Objective-C? Bypass the app stores? Sounds like an instant win! A handful of game developers are pushing the envelope of mobile HTML5 games at the moment. Getting Started Before you start sketching the next Temple Run or Angry Birds, you should be aware of a few things that could dampen your excitement: Performance Mobile browsers are not traditionally known for their blazing JavaScript engines. Now, as a Web developer you’re used to dealing with the quirks of certain browsers and degrading gracefully and dealing with fragmented platforms. In this tutorial, we’ll make a relatively simple game that takes you through the basics and steers you away from pitfalls. It’s a fairly simple game, in which the user bursts floating bubbles before they reach the top of the screen. We’ll develop this in a number of distinct stages: 1. Enough of the background story. Let’s kick off with a basic HTML shim: 2.