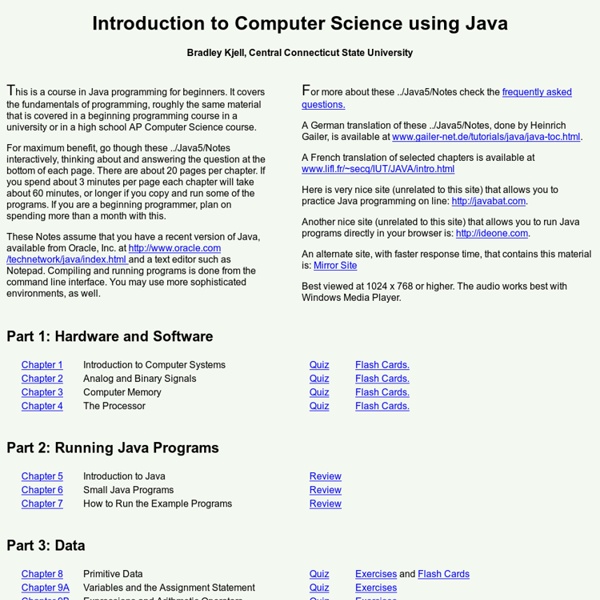 This is a course in Java programming for beginners. It covers the fundamentals of programming, roughly the same material that is covered in a beginning programming course in a university or in a high school AP Computer Science course. For maximum benefit, go though these ../Java5/Notes interactively, thinking about and answering the question at the bottom of each page. There are about 20 pages per chapter. These Notes assume that you have a recent version of Java, available from Oracle, Inc. at and a text editor such as Notepad. For more about these .. A German translation of these .. A French translation of selected chapters is available at www.lifl.fr/~secq/IUT/JAVA/intro.html Here is very nice site (unrelated to this site) that allows you to practice Java programming on line: Another nice site (unrelated to this site) that allows you to run Java programs directly in your browser is: Related:  Java

AP Computer Science A Course Details Computer Science A emphasizes object-oriented programming methodology with an emphasis on problem solving and algorithm development and is meant to be the equivalent of a first-semester course in computer science. It also includes the study of data structures and abstraction. This course covers the following topics: Object-Oriented Program Design The overall goal for designing a piece of software (a computer program) is to correctly solve the given problem. Program and Class DesignProgram Implementation Part of the problem-solving process is the statement of solutions in a precise form that invites review and analysis. Implementation techniques Programming constructs Java library classes and interfaces included in the AP Java subsetProgram Analysis The analysis of programs includes examining and testing programs to determine whether they correctly meet their specifications. Data structures are used to represent information within a program.

The Java™ Tutorials The Java Tutorials are practical guides for programmers who want to use the Java programming language to create applications. They include hundreds of complete, working examples, and dozens of lessons. Groups of related lessons are organized into "trails". The Java Tutorials primarily describe features in Java SE 8. For best results, download JDK 8. What's New The Java Tutorials are continuously updated to keep up with changes to the Java Platform and to incorporate feedback from our readers. This release of the tutorial corresponds to the JDK 8u101 release. Two new processing limit properties, entityReplacementLimit and maxXMLNameLimit, have been added to JAXP. Trails Covering the Basics These trails are available in book form as The Java Tutorial, Sixth Edition. Creating Graphical User Interfaces Creating a GUI with Swing — A comprehensive introduction to GUI creation on the Java platform.Creating a JavaFX GUI — A collection of JavaFX tutorials. Specialized Trails and Lessons

Mr Rogers' AP Computer Science Syllabus The Intellectual Challenge In college, computer science is generally considered an intellectually challenging course. Correlations between the combined PSAT math and verbal scores with the passing rate in AP Computer Science bears this out. AP Standards: Topic Outline: This link give the official AP computer science topic outline. Computer Lab: Our computer lab contains up-to-date computers as well as a promethean board for displaying information to the entire class. Computer Lab Hours: The lab or computers in room 134 will normally be open for an hour after school every day except Wednesday. TextBooks : Mr. Java Methods A & AB Object-Oriented Programming and Data Structures AP Edition, Maria Litvin, Gary Litvin, 2006, by Skylight Publishing, ISBN 978-0-9727055-7-8 Be Prepared for the AP Computer Science Exam in Java (Paperback) by Maria Litvin Addison-Wesley's Review for the Computer Science AP Exam in Java (Paperback) by Susan Horwitz Objectives Provided by Mr. Materials for Class

thinkapjava.pdf Java Examples & Code Snippets - Home Programming via Java: Recursion examples When examining recursion in the previous chapter, we looked at several examples of recursion, but the problems were always just as easy to solve using loops. The chapter promised that eventually we would see examples where recursion could do things that can't easily be done otherwise. We'll see some examples now. 18.1. Fibonacci numbers But let's start with an example that isn't particularly useful but which helps to illustrate a good way of illustrating recursion at work. We want to write a method fib that takes some integer n as a parameter and returns the nth Fibonacci number, where we think of the first 1 as the first Fibonacci number. public int fib(int n) { if(n <= 1) { return n; } else { return fib(n - 1) + fib(n - 2); } } In talking about recursive procedures such as this, it's useful to be able to diagram the various method calls performed. Figure 18.1: Recursion tree for computing fib(5). Essentially, we are summing fib(n) 1's, which will require fib(n) − 1 additions. 18.2.

Introduction to Programming in Java: An Interdisciplinary Approach a textbook for a first course in computer sciencefor the next generationof scientists and engineers Textbook. Our textbooks Introduction to Programming in Java [Amazon · Pearson · InformIT ] and Computer Science [Amazon · Pearson · InformIT ] are an interdisciplinary approach to the traditional CS1 curriculum with Java. We teach the classic elements of programming, using an "objects-in-the-middle" approach that emphasizes data abstraction. We motivate each concept by examining its impact on specific applications, taken from fields ranging from materials science to genomics to astrophysics to internet commerce. The first half of the book is organized around four stages of learning to program: Chapter 1: Elements of Programming introduces variables; assignment statements; built-in types of data; conditionals and loops; arrays; and input/output, including graphics and sound. Booksite. For students: Java programming environment. For instructors: Python. Copyright © 2000–2016 and .

Downloads - CodeSpells All downloads are to be used for personal enjoyment or educational purposes and cannot be used to resell in any way, this is work done by UCSD graduate students and is owned by UCSD. April 2013 Downloads: Mac OSX 10.5 and Above: Download the zip file, unzip and double click CodeSpells_4_14_13 from inside the unzipped folder. Bug Fixes: Fixed Massive Fire Spell Added the Novice Levitate Spell March 2013 Downloads: Download the zip file, unzip and double click SarahMacFinalVersion from inside the unzipped folder. Bug Reporting Please fill out this form for any bugs that you may find in CodeSpells and we will do our best to keep up with them! Most Popular Bugs Being Fixed Now: Make a Windows version - We are working on this now. Spells are not copying out of the Spellbook - When you click copy, the spell should automatically appear in your inventory, on some machines that is not happening. Being able to choose how the character looks up and down - For example using the mouse.